Even with the uncertainties of COVID-19 looming and only a month’s time for planning, the Gallup Inter-Tribal Indian Ceremonial Association’s fine arts exhibition at Red Rock Park was a “tremendous success” this year, according to coordinator Joyce Graves, who has been volunteering with the Ceremonial art show since 1983. 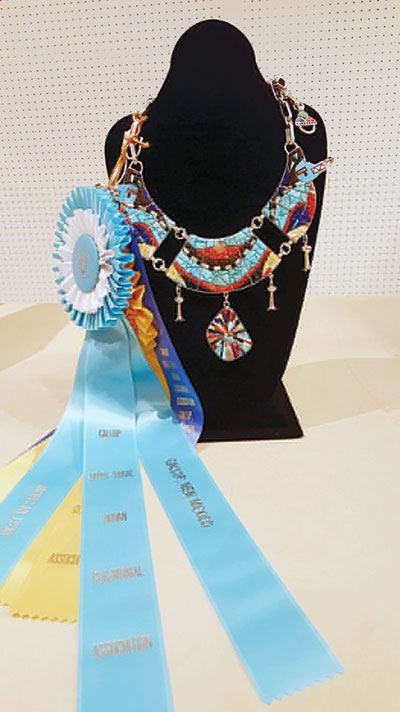 Seventy-five percent of sales revenue went to back to the artists, said Graves, with 25% going to the Ceremonial Association.

“I was so excited that artists came and entered and people came to buy because you just never know, especially this year,” said Graves. “In a way it was like family coming back home to Ceremonial.”

Several award-winning artists said it was their first foray back into the art market circuit since the outbreak of COVID-19 in March 2020.

“It feels great,” said Duwayne Chee Sr., from Sawmill, Arizona, who won best of class in sculpture. “It’s been a while… winning the prize, I feel good about it.”

He said his carved red cedar piece called the “Sun Carrier,” which depicts Turquoise Boy carrying the sun, is a tribute to all of the Diné relatives who succumbed to COVID-19.

“We lost a lot of grandpas, grandmas, uncles, aunties, moms and dads, brothers and sisters,” he said. “When you lose a family member, it makes you think about how you’re going to do your art.”

His wife, Christina Chee, said it has been an eye-opening year for families and artists in their circle.

“The pandemic has really brought into focus the traditional culture and teachings we grew up with,” she said. “Praying in the morning, praying for one another, being thankful for what we have as opposed to being materialistic and worrying about things that are not really important.

“It’s back to family,” she said, “back to basics, back to our cultural roots.”

Graves said the judges thought the quality of the pieces were outstanding this year.

“I think we had really high-quality entries,” said volunteer Cheyenne Hollow Horn, who has been tabulating the art entries since 2013. “The work was on par with some of the best years we’ve had. We’re so excited, we’re so blessed.”

Best of show and best of class lapidary winner Bryan Tom, from Church Rock, said he was “so surprised” to hear that he won.

“I’m still in shock right now,” said Tom. “I’m trying to come back down to earth with it because I’m just realizing all the people who won before me. Those are some big names and mighty works.

“For me to win such a prestigious show was just unbelievable,” he said. “I still can’t believe it.”

This is the 32-year-old’s first major art award, which he earned for his innovative gold and silver “Avanyu Swim” reversable necklace, which features a two-headed serpent and elaborate gemstone inlay.

Tom said he is a mostly self-taught first-generation artist, who has learned largely through “trial and error” over the past decade.

He felt his entry for this year’s exhibition “had to be epic” with the 100th Ceremonial coming close, and he wanted a traditional theme.

“The motif that came to mind was the water serpent,” said Tom. “It’s been around for thousands of years here in the Southwest.”

Santa Clara Pueblo potter Chris Youngblood said he too was very excited to win the best of class in pottery award, as his Oval Ram and Rain Bowl represents a new direction in his work using tan/buff coloring and mica for detail.

“It’s an oblong vase with a polychrome theme and two rams on it,” he said. “I’m always looking for new ideas. It’s the little things – when you try something new and people like it, it’s always exciting.”

Best in class for baskets winner Kathryn Konyahoema, from Shumopovi, Arizona, said her basket weaving originates from the age-old basket dance ceremony, which she grew up with.

Konyahoema said she is encouraged by her award for her “Palhik Mana” basket that depicts the water maiden katsina figure.

“Basketry is part of our tradition, our culture, and eventually it became an artform,” she said. “The artworld seems to be changing and there’s really not much you can change with basketry. I focus on traditional basketry, but I do elaborate a little bit on the design.”

She said in her 30 years of weaving, basketry has always been therapeutic.

“It took my mind off of things that were going on in my life,” said Konyahoema, “I found therapy and in weaving these baskets.”

Marian Nez, originally from Shiprock, won best of class for weaving with her extraordinary one-of-a-kind depiction of Spider Rock in Canyon de Chelly with a Yei Bi Chei rug embedded in the landscape.

Born in 1967, Nez and her sisters were taught to weave by her mother and grandmother on a loom in their family hogan.

“The reason we submitted the weaving is because it’s an incredible piece of art,” she said. “I’ve never seen a pictorial like this, especially with Spider Rock in the background. We just knew it was incredibly special.”

Kayenta artist Alvin John, who won best of class in painting, said his piece, “Healing Song,” that depicts his late grandfather, Medicine Man Slim Nez, speaks to the roots of Diné culture and healing through prayer and ceremony.

“It relates to the history and creation of our people, how much our culture is unique and how we can heal our people with our traditional upbringing, prayers and herbs,” said John.

“The elderlies really respected those and everything they were given here on Mother Earth,” he said. “They took care of it. They prayed to it every day and blessed themselves with it.”

John said many have forgotten the essence of what it means to be Diné and “Healing Song” is intended to inspire people to look back at the history, legends, stories and philosophies behind Diné culture.

“If we get into a situation like the pandemic, we go back to Mother Earth to do prayer and a blessing, to talk to the elements,” he said. “We heal and refocus ourselves and our Diné people. The painting represents all of that.”

John said that he enjoyed attending the Ceremonial fine arts exhibition, his first in-person show since COVID-19 hit, where fellow artists reunited and talked about their experiences with the pandemic and how it impacted their work.

“This year’s Ceremonial was almost like going to a ceremonial gathering,” said John. “It was healing. That’s how we looked at it as artists. It had a lot of meaning to it and reflected what the artists went through.”