Race series urges Diné to get out, enjoy the land 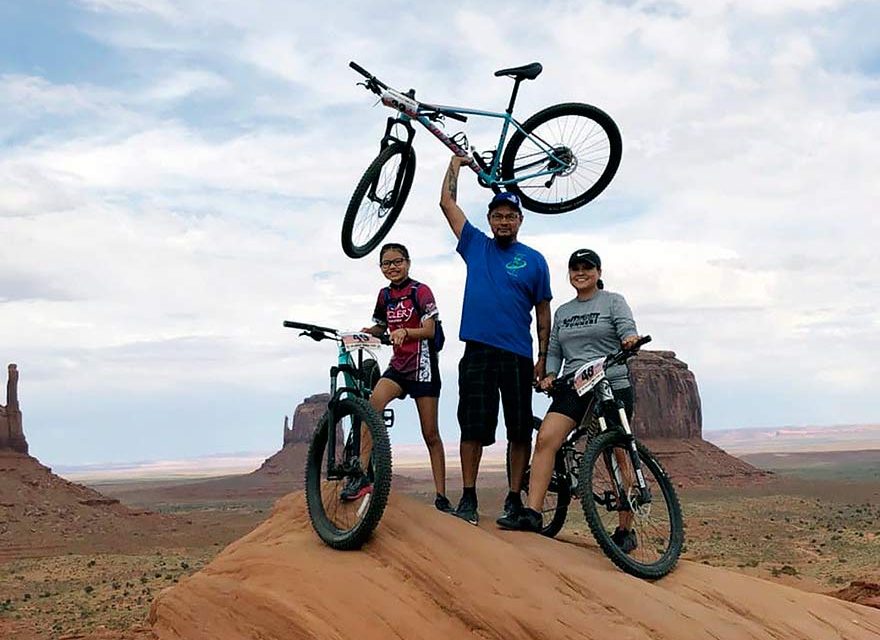 SUBMITTED
A family who participated in the Monument Valley Bike Race stops for a photo opportunity. The family took part in the five-race bike series, the Tour de Rez Race Series.

A growing group of locals are exploring the Navajo Nation on two-wheelers.

Due to the strong interest in bike racing, the NavajoYES organization is hosting a new and improved Tour de Rez Race Series.

The series includes five stops where road racers and mountain bikers compete for points that add to a total score after the final race in late September.

Tom Riggenbach, director of NavajoYES, said the sport has gained popularity over the years and people have stopped to look.

“There’s just been kind of a towing interest in biking and bike racing,” he said. “People really started realizing, ‘We’re really into this, it’s fun and it’s good.’ It just adds to the bike revolution on the rez.”

Biking is not new to the reservation but the series adds a new sport.

Tour de Rez began in 1991 with a few races here and there but nothing like the series that’s emerged. Participants collect points to add to their standings each week.

The series is made up of five races. The first, the Paradise Loop Ride, was held in Shonto in early April; the second, the Hashkeniinii MTB Racem was on June 1 at Navajo Mountain; and the Monument Valley Bike Race was held on June 30 at Monument Valley Tribal Park. The final two are the Asaayi Road Race (the only road race in the series) on Aug. 17 and the Chuska Challenge on Sept. 28 at Buffalo Pass.

The Chuska Challenge is perhaps the oldest race, which has been around for nearly 30 years, which is why it is considered the grand finale. Each race has different lengths with the Hashkeniinii, a 52-mile race, the longest of the series.

Riggenbach said it is a great way to further bikers and get them to see the land that is often overlooked.

“Now you can race whatever races you want,” he said. “The more races you race the more points you get. People can come out here from border towns instead of the other way around.”