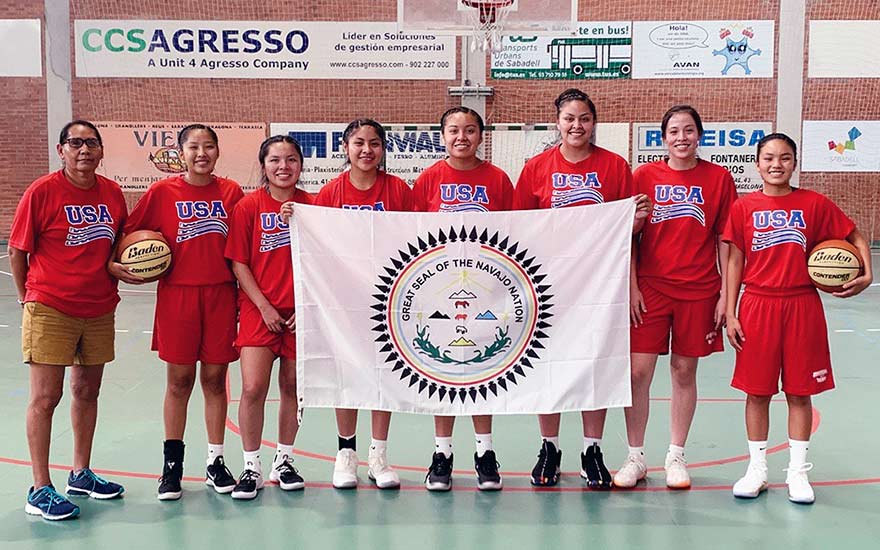 SUBMITTED
The American Congress of International Sports girls’ basketball team, a club made of seven Diné girls, pose with the Navajo Nation flag during their eight-day excursion touring Spain earlier this month.

Facing some tough competition, the American Congress of International Sports girls’ basketball team received the ultimate compliment from one of premiere teams from Madrid, Spain.

The seven Diné girls who were coached by Kim Williams did not win a single game but they did turn some heads during their eight-day excursion touring Spain.

In fact, the Olympic District coach from Madrid told Williams that her girls were “strong, tenacious and resilient.”

“Your people should be proud of them,” the coach told Williams.

That commendation gave Williams and her team goose bumps, as they showed no fear in playing some elite teams in Barcelona and Madrid.

“We played a mixture of high school, college and Olympian players,” Williams said. “We didn’t win any games but we gave those teams a game.

“For the level that we played against, these girls never backed down,” she said. “They never said they couldn’t do this. They were on the floor battling and they didn’t care how big the other teams were. They weren’t afraid to play them.”

The Williams-coached team featured four girls from her Tuba City squad, including Larissa Yazzie, Chenille Nodman, Shiala Dugi and Talisha Attakai. The rest of the team was made up of American Leadership Academy sisters Samantha and Tiffany Quigley and Page’s Mikala Benally.

The ACIS team played two games in Madrid and two games in Barcelona. In Madrid, they came close of winning their first contest but fell a tad short, losing 67-66.

“We made a 10-0 run on them with about three minutes left but we lost that game on the very last shot,” Attakai said.

Williams said her team made a valiant comeback but it wasn’t enough.

“We had our opportunities but we just let it slip away,” she said.

In their next contest, the ACIS team played the Olympic District club that featured some of Spain’s best players.

“As you can imagine they were more physical and athletic than we were,” Williams said.