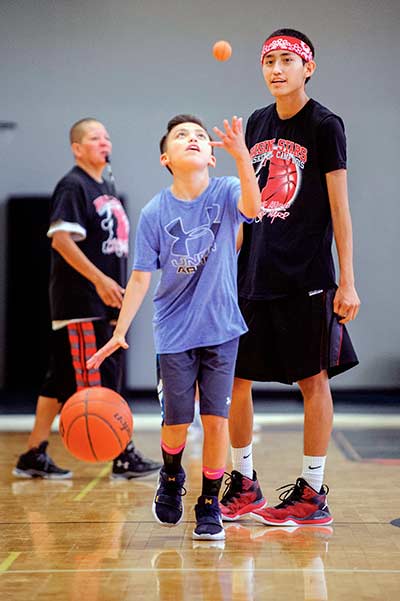 It is the time of the year the Rising Stars Camp coordinators look forward to the most.

The 2018 Rising Stars Camps held at Navajo Preparatory School will begin next week on June 5, starting with the volleyball camp.

Rising Stars Co-coordinator Rainy Crisp said those behind the scenes are as ready as they’ll ever be.

“This is something that we always get excited for, even in the beginning, when it was only the girls basketball camp for two weeks,” Crisp said. “This is the time we start getting excited. It’s something that we look forward to every summer. As long as we’re able to provide it for our local athletes we’re going to do it.”

The original camp, the girls’ camp, is in its 24th year but five other camps have been added since it started over two years ago.

The camp was established with the late Shiprock High School coach Jerry Richardson in mind, along with Early Crisp and Betty Ojaye.

The camp has a reputation for bringing in some of the best local and former athletes and coaches to assist. And participants can experience dormitory life in an effort to prepare them for college.

Crisp said the camps provide opportunities for athletes and coaches to grow. She said often the camp is misconceived as being only for current or prospective Navajo Prep students, but the picture is much bigger.

“It’s really finding coaches that have the passion for their sport and want to teach and want to give an opportunity for these little athletes to grow and learn,” she said.