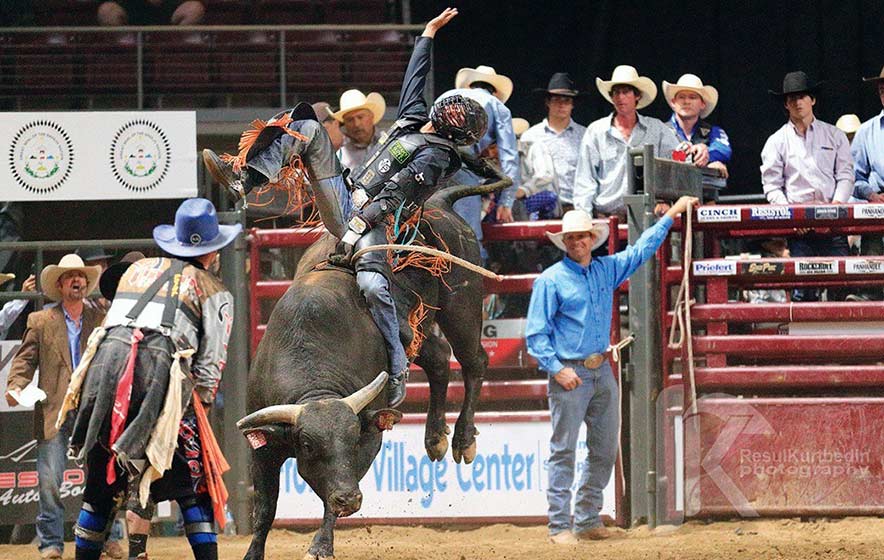 An ornery bull struck down Cody Jesus on Friday night.

He was feeling the affects of that collision the following day but that didn’t stop the Diné bull rider from claiming this year’s title event at the Yavapai Bottle Gas Mile High PBR presented by Coors Light & Navajo Nation on Saturday night.

Jesus won the aggregate with 174.50 points at this PBR Touring Pro Division event, which allows competitors to enter twice each night for a total of four draws.

He finished half-a-point better than Caden Bunch at this two-day event in in Prescott Valley, Arizona, as the Oklahoma bull rider rode two bulls for 174 points.

Jesus placed first in Round 1 by riding Pey Pey’s Dream (4B Bucking Bulls) for 88.50 points and the following night he added an 86-point effort on Rack City Dreamin (4B Bucking Bulls), which was good enough for a three-way tie for second.

“I had a bull run me over on Friday night and he beat me up pretty bad,” Jesus said in a phone interview with the Navajo Times. “Man, I was sore but I was like ‘I’m going 2-for-2 and I’m going to win this.’”

Admittedly, the Sawmill, Arizona, bull rider felt the pressure to produce a couple of high scores based on what everyone else was doing.

“They all came ready to ride,” he said, as the event had a total of six riders make at least two rides. “It made me want to step up my game.”

For the event, Jesus covered 3-of-4 bulls. In his other ride, he rode Danny Boy (Granger Bucking Bulls) for 85 points, earning a 10th place finish in the aggregate race.

“You have a chance win first and second on both nights,” Jesus said of the format in the PBR Touring Pro Division event.

By winning the aggregate, Jesus earned 15 points in the PBR world standings. He is currently ranked No. 37 with a total of 69 points.

“I want to make the PBR World Finals again and see where I end up,” Jesus said while adding that he would like to cover 75% of his bulls this season.

“If I ride 75 percent, or even 60 percent of my bulls I should reach my end goals of making the PBR World Finals,” he said. “I just have to try and stay on everything I get on.”

And while the 2020 PBR season remains a blur for Jesus due to the pandemic and a nagging groin injury, he’s looking to return to his former self when he had a breakout year in 2019.

During that season, he competed in his first world finals and he finished the year at No. 20 with 1,555.83 points.

But a groin injury prevented Jesus from building off that season and in 2020 he went to a couple of events before the pandemic sidelined all sporting events, including the PBR, for a couple of months.

“I had planned on taking two weeks off and let it rest and then COVID hit,” he said, “so I just took the rest of the year off.”

Jesus said he didn’t do much during the pandemic and having that long pause was fine with him.

“That is kind of who I am,” he said. “I don’t do a whole lot. I like having peace and quiet. I don’t need to travel and I was just home, riding horses and I still had my bulls to take care of.”

During the quarantine, Jesus said he did rez golf at home and in his spare time he rode his own bulls.

“That’s what kept me sane,” he said. “That’s all I did and for the most part I just chilled at home.”