‘Controlling what we can control’: KC hopes to nose its way into state

A playoff appearance is still a possibility for the Kirtland Central girls’ basketball team.

The Lady Broncos (7-1) can finish no worse than second in District 1-4A as they trail Gallup in the league standings.

The two teams split the series this year but Gallup owns the tiebreaker based on the point differential. The Bengals have a five-point win over KC while the Broncos avenged that loss with a three-point win last week. 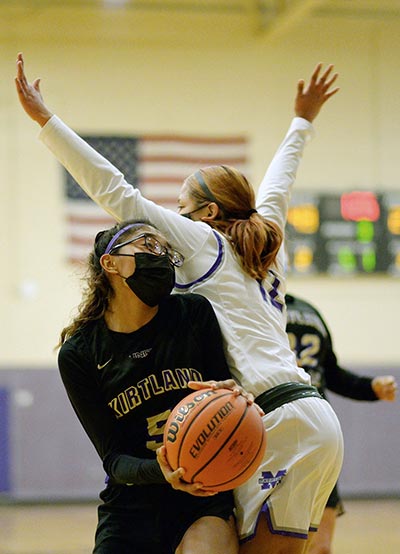 If both teams can finish the week unscathed, Gallup will earn the district’s automatic bid to the playoffs while KC will keep its fingers crossed in hopes of being called up, as the New Mexico Activities Association will award two at-large bids to the big dance.

On Saturday, the NMAA will release the state brackets, which is scheduled for next week with the top seeds hosting the first two rounds.

“We’re just trying to put ourselves in the position to make our case as a top eight team this year,” Kirtland Central coach Devon Manning said on Tuesday following his squad’s 66-38 win over Miyamura. “There’s a lot of good teams that are going to be trying to make that same case, so we just got to take it game by game and control what we can control.”

After leading by as much as 13 points in the first half, the Broncos had a slight hiccup at the end of the second stanza as Miyamura pulled within 31-25 at the break behind a 9-2 run.

“I thought we played a really good first half until that last two-and-a-half minutes when they went on their run,” Manning said. “We got sloppy with the ball, we let one mistake turn into three mistakes, and it just kind of a snowballed.”

But when the game resumed, the Broncos showed why they belong in the state playoffs as they scored the first 11 points in the second half to break open the game.

“We just came out and do what good teams do,” the KC coach said. “They put it in the past and they ran our offense well. We hit shots, we got a lot of steals and I thought our press was really strong tonight. They went out there and just tried to play at a level that Miyamura couldn’t match.”

Senior guard Monique Shim scored five of her 16 points during that third-quarter run as that surge knocked the wind out of Miyamura’s sails.

“I thought our girls put a great fight to get back into it but then we came up flat,” Miyamura coach Josh Dupont said of the second half. “I felt that just wasn’t us and the girls know that. We just got a little careless with the ball and you have to play four quarters of good basketball to beat a team like that.”

With momentum, the KC squad pushed the lead to as much as 32 points as eight players scored, headed by the 22 points turned in by junior guard Aisha Ramone.

She paced the Broncos with a dozen points in the opening half and in the fourth she tallied nine.

“We kind of slacked off there at the end of the second quarter but we picked it up,” the KC sharpshooter said. “We started to run our offense and we played great defense.”

The Broncos also got eight points from senior Kayleigh Cadman as she finished with eight.

Since their 47-42 setback to Gallup on April 9, Ramone said her team has been playing well as of late as the Broncos have won six straight.

“The loss to Gallup really motivated us,” Ramone said. “We’re a young team but we’re a really good team. We have some freshmen on the team and they’ve stepped up. The thing that I like about this young team is we’re developing and we’re getting better and better.”

Like her coach, Ramone said her team deserves to be in the state playoffs based on how well they’re playing.

“I feel like we’re one of the top teams in the state,” she said.

Manning took it a step further by stating that his squad is one of the top four teams in the state at the 4A level.

“That’s my opinion,” he said. “We’ve been playing like a top four team and we battled Gallup twice. We beat each other and if we can get in we’ll be grateful.”

KC will close out the regular season with a pair of home games starting with Aztec tonight and Bloomfield on Friday.

Miyamura has two games left as well as they will play at Bloomfield today and Shiprock on Friday.

The Patriots did play Aztec on Wednesday night but the results for that contest were not available at press time.

“We’re looking to finish the season with three wins in a row,” Dupont said. “We’re treating the next three days like it’s a tournament. With no tournaments this year this is about as close as we can get to one.

“You gotta win three in a row to win a regular season tournament,” he added. “That is the way we want to finish our season. We’re just trying to make the most out of the opportunity that we have.”