In his first year as a tie-down qualifier, Brad Moreno was one spot away of making the short round at last week’s National High School Finals Rodeo.

“The last guy out knocked me out of the short round,” Moreno said. “It’s a little disappointing but it’s all on me.”

In his opening round performance, he recorded a 13.87 run that placed him 46th overall. In the next round he bettered his time with a 12.87 effort and finished 28th overall.

“For both of my runs, I didn’t get a good start,” Moreno said. “My groundwork was OK but I just needed to get a better start.”

Of the two rounds, Moreno felt that he lost some precious time in the first round as he bobbled his flank.

“I had to pull for my flank twice,” he said. “I think I lost a second or two but it was one of the bigger calves they had.” 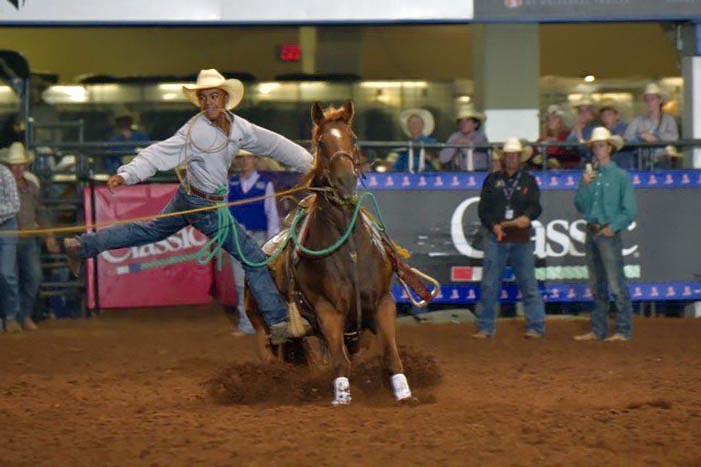 For the weeklong rodeo, Moreno used his father’s horse, Darla, a 13-year-old mare.

“She was trained by my dad,” he said of horse owner John Boyd III. “She works good. She’s fast and she can easily setup up for a good run.”

As a three-year bull-riding qualifier at nationals, Moreno said competing in the tie-down event was a different experience.

“It was tough and I knew that going in,” he said. “They had some tough ropers out there so there was no room to make mistakes.”

Despite coming up a tad short of making the short round, Moreno is looking forward to next season, as he will enter his senior year at Casa Grande Union High School.

“I know what I have to work on,” he said. “This makes me more focused for next year and I’m going to get after it.”

Moreno, who previously attended Monument Valley High School, said he’s been living in Casa Grande for about a year as his dad was transferred there after the closure of the Navajo Generating Station.

“As a transfer student I had to take a year off from (high school) sports,” he said, while noting that he did practice with the cross-country team as way to stay in shape.

“I ran with them but I couldn’t compete in any of the meets,” he said.

In addition to Moreno, Coyote Canyon, New Mexico, cowboy Dean Holyan took part in the tie-down event as he roped his opening draw in 11.57 seconds.

In the next round, however, he recorded a no time.

Also qualifying for nationals including four team ropers from the area.

The team of James Arviso and Jaken Todacheenie finished their opening round run in 11.44 seconds but they didn’t have any such luck in the next round.

Meanwhile, the team of Trey Begay and Cody Lansing recorded a pair of no times.

In the rough stock event, Robbie Taylor Jr. and Kobe Yazzie didn’t fare as well either.