Derek Parrish has bitten plenty of bullets in his lifetime.

The 30-year-old Sanostee, New Mexico Diné is living a full life despite using a wheelchair.

“Hearing that kind of news is going to be hard for anyone to accept,” Parrish said after learning that he had little to no chance of walking again after being involved in a violent altercation six years ago.

“I was aggressively attacked,” he said. “I was involved in an altercation and that led into a fight. I had the upper hand and the other individual retaliated and got into his vehicle and ran me over.”

Parrish said his spinal cord was severed where the T12 and L1 vertebrae meet.

After he gained some of his strength back he got involved with wheelchair basketball through the Tribal Adaptive Organization. The nonprofit group was founded by Noah Blue Elk Hotchkiss in 2015, six years after he was paralyzed from the waist down due to a horrific head-on crash that killed his stepmother, Cassandra Yazzie-Hotchkiss.

“Growing up I’ve experienced a lot of hard times and being paralyzed is like biting another bullet,” Parrish said. “I just have to live with it. It’s learning how to overcome and be optimistic about this situation.”

As a way to put a positive spin on his injury, Parrish has used wheelchair basketball as an outlet. And after playing the game for about five years Parrish will take his talent to Southwest Minnesota State University.

“It’s a good school,” Parrish said of four-year public university in Marshall, Minnesota. “It’s a Division II school and going there makes a lot of sense for me.”

When asked to explain, Parrish said San Juan College in Farmington is the closest college to his home and it’s a 60-mile drive.

“I would have to be on the road for at least two hours to take on schooling if I went there,” he said. “With me being in a wheelchair (going to SMSU) would be a right fit because things would be right there for me. I’d be living on campus.”

Besides SMSU, Parrish said he was looking at two other schools – Arizona State University and the University of Arizona. 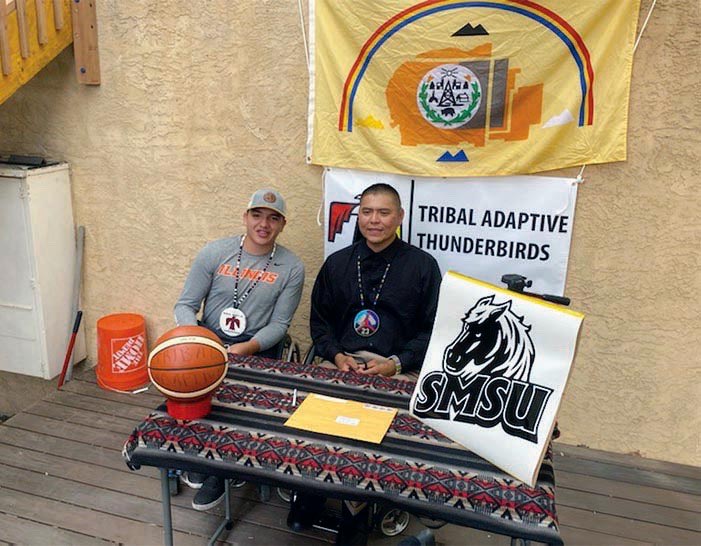 Submitted
Derek Parrish, right, signed his letter of intent to play for the Southwest Minnesota State University wheelchair basketball team on July 15. He is pictured here with Tribal Adaptive Organization founder Noah Blue Elk Hotchkiss, who was paralyzed in 2009 after a head-on collision.

Unfortunately, ASU lost its funding for wheelchair basketball while the program at Arizona would require him to play on a limited basis.

“The University of Arizona was an option too, but I felt like I would get more playing time and more experience going to SMSU,” he said. “I feel like attending SMSU is more suitable to meet my needs.”

Parrish said he’s going to be studying recreational and fitness management and minor in psychology.

“I hope to become a PE teacher here on the Navajo reservation,” he said.

As for his minor, Parrish said his psychology classes would be useful in the future as he plans on mentoring people with disabilities.

“I just want to tie that all into what Tribal Adaptive Organization does,” he said.

The nonprofit group, which is now based out of Farmington, is primarily focused on getting people with disabilities into playing wheelchair basketball.

“Wheelchair basketball is our main draw and our activity but we do help facilitate other types of opportunities,” said Tribal Adaptive Organization Development Director Jason Hotchkiss. “A lot of our focus is about advocacy. There are opportunities available out there for people with disabilities but navigating the system can be really daunting and sometimes it can be really frustrating.”

Hotchkiss said they helped Parrish navigate through the tribal and state Division of Vocational Rehabilitation offices that helped pay for his college.

“In Derek’s case we went from them buying some books to actually paying the rest of his college since it would be cheaper for him to go there instead of attending a New Mexico college,” he said.

Parrish said he’s very grateful the Hotchkiss family steered him in the right direction, especially after his violent altercation in 2014.

“It’s been very therapeutic,” he said. “Being able to find this sport after my injury has been a big help. It’s opened up doors and opportunities for me.”

And while he’s found some solace in wheelchair basketball, Parrish wanted to share a message of hope for others who are experiencing some sort of hardship.

“No matter what you’re faced with, anything is possible,” he said. “I’m a good example of that. Good things do come; you just have to have a little patience.”