‘My sister was a big help’: Birdsprings siblings compete in breakaway at nationals 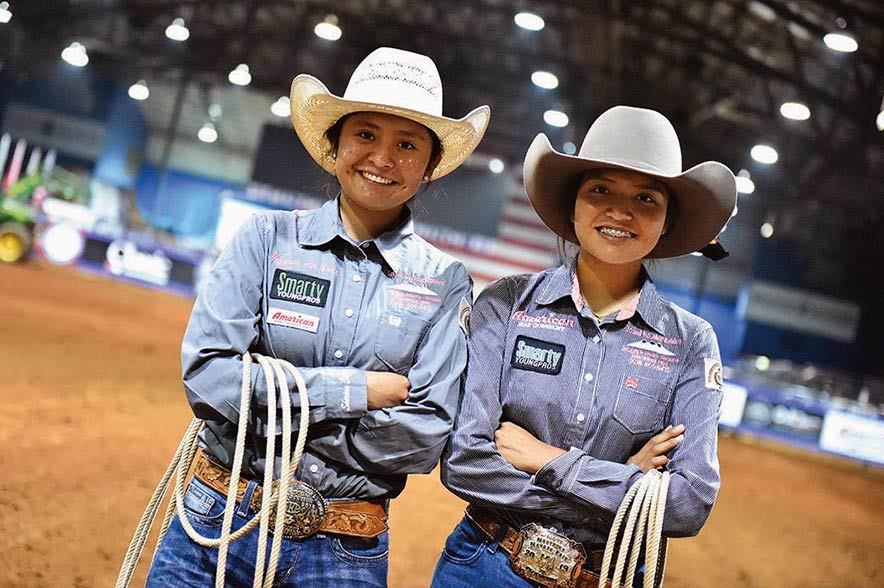 With it being her last year, Sherina Singer was grateful that her younger sister, Shaelene, competed with her at nationals.

“It was amazing,” Sherina said. “It’s not the first time that two siblings qualified for nationals but the experience was unbelievable.”

As a two-year qualifier, Sherina said she took it upon herself to show her younger sibling the ropes of competing at nationals.

“I basically guided her into the (roping) box and telling her what to expect,” she said.

Drawing from her own experience, Sherina told her sister to block the crowd out as a way to stay calm and focused.

“There’s always a big crowd and I didn’t want her to get too fazed by that,” she said. “I just told her to be herself and not worry about them.”

Those words seemed to have a positive effect on Shaelene as she finished the weeklong rodeo in 28th-place in her national debut. After two rounds, Shaelene roped two draws in 9.25 seconds.

“Going in I was real nervous but my sister was a big help,” Shaelene said.

And although her trusted mare, Baby, did her job, Shaelene wasn’t sure how her 10-year equine would act in the roping box.

“That was a concern,” she said. “I didn’t know if she was going to cooperate with me but we did OK.”

In her opening round draw, Shaelene turned in a 5.18 run and placed 58th overall in the first round. She fared much better in the next round as she posted a 4.07 run.

With those two runs, she had to wait a few days to see if she made the cut for the short round performance as the top 20 contestants move on.

As for Sherina, she ran into some bad luck in the opening round when her calf made a last-second turn just as she threw her lasso.

“I was trying to be quick,” she said. “At nationals, you have to make a quick run so when I got out of the box I took two swings and when I threw my rope the calf stepped to the left and that threw the momentum of my rope off.”

“That run was amazing,” Sherina said. “I knew I had to go for it because I wanted to try and get a top 10 finish.”

To earn her second qualification, Sherina finished as the reserve champion for the second year in a row under the Arizona High School Rodeo Association. She finished the season with 45.50 points while Shaelene tallied 41 points in the year-end standings.

Both cowgirls said things might have been different if there had been a full rodeo season as the COVID-19 pandemic canceled the remaining 10 rodeos.

“If we finished the season I think the standings would have change,” Sherina said. “Missing those rodeos impacted my season because I wanted to win a state title.”

“We were bummed the rest of the rodeo got canceled,” Shaelene added.

Nonetheless, the younger Singer sister is looking forward to the next three years as she is gunning for a state title.

“My goal is to finish first at state and hopefully at nationals, too,” she said.

Both sisters credited their family, friends and sponsors for their support.

“They encouraged us the whole time but it wasn’t just them,” Shaelene said of her immediate family of parents Charlie Singer Jr. and Yvonne Yazzie as well as older brother Cy Singer. “The whole community of Birdsprings was behind us, too.”

“Our sponsors really helped us get on the road,” Sherina said of the American Hat Company, Best Ever Saddle Pads, Pegasus Air Boots, Smarty Young Pros, Team Cinch and Sacred Mountain Builders. “I like to thank them for supporting us.”