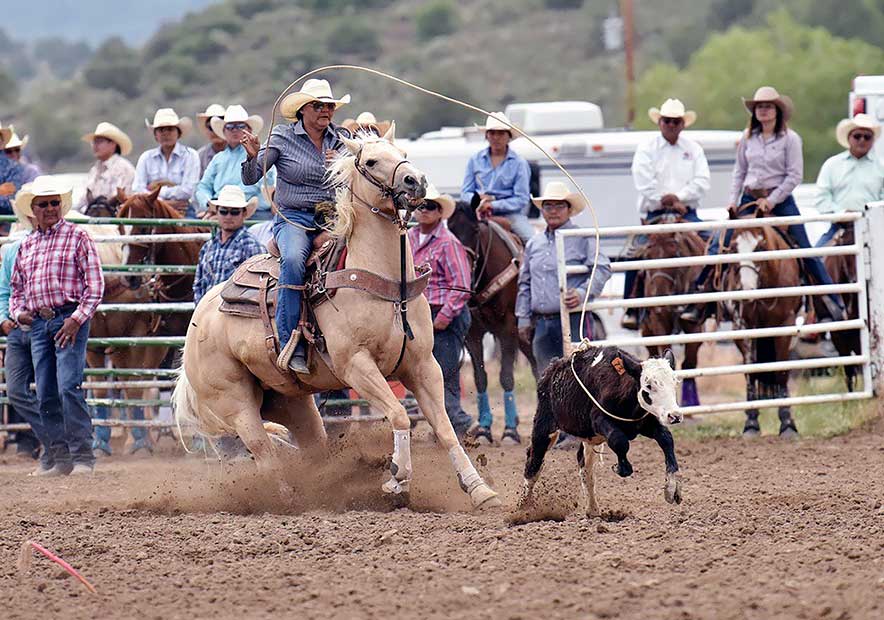 Special to the Times | Smith Rodeo Photos
Devyn Dennison makes a successful catch in the breakaway event at a recent rodeo. Dennison won the year-end title in the Southwest Indian Rodeo Association and earned her qualification for the Indian National Finals Rodeo.

The Coolidge, Arizona cowgirl was hoping for a full season but due to the coronavirus she emerged as the year-end winner as the association completed three rodeos before the pandemic hit.

Dennison finished the season standings with 16.5 points, which was 2.5 better than reserve champion Kaycee Werdel.

“With the season being so short this was unexpected,” Dennison said. “We have two of the toughest regions down here. We have some tough girls and there are six, seven and maybe eight girls that can really rope.”

Admittedly, Dennison thought the coronavirus was going to fizzle out by the summer so she had planned to hit a number of rodeos with her younger sister Kassidy.

“We were going to hit the road,” Dennison said, adding that they intended to compete in a number of qualifying events for RDF-TV’s The American as well as the Women’s Professional Rodeo Association and the Indian National Finals Rodeo.

“It’s hard to do this interview because we only competed in three rodeos,” she said. “I feel really defeated because we didn’t get a chance to rodeo. I honestly felt like that this year was going to be special. It’s the most prepared that I have every been in the sense of horsepower and abilities.”

In her first run in Casa Grande, Dennison said she drew a good calf but she broke out.

“I would have placed either second or third but I was too aggressive with my start,” she said.

Nevertheless, the 2002 INFR world champion bounced back with an electrifying 2.69 run in the next round, which earned her a two-way tie for first-place with Arianna Jones.

At that rodeo, Dennison had switched out horses as she used her sister’s horse, Tatiana, instead of her trusted palomino, Baby Piggy.

“I was still trying to get used to that mare,” she said of Tatiana. “She has a different style and she’s super fast.”

Dennison felt that she didn’t really key in with her start in the first rodeo but on the following day she scored much better.

Dennison said she had planned on using Tatiana for the rest of the season as the two sisters were going to haul one breakaway horse to make room for their barrel horses.

“We were invested to do both events but a lot of things have happened since our last rodeo in Casa Grande,” she said. “I feel real bad for all the contestants. As competitors, we’re so used to grinding and grinding but with this coronavirus we’re all taking a timeout.

“This virus is bigger than all of us,” she added. “It’s bigger than rodeo and it’s really affected us, especially on the Navajo Nation. I just hope everybody stays safe.”

Dennison said she feels blessed to earn her INFR qualification as she missed last year’s event by half a point in the SWIRA region.

“It was a hard pill to swallow but it was my undoing,” she said. “I had grinded really hard to get there but I ended up missing it. I thought I had made it but it was my own fault for not double-checking my points in the standings.”

In the regional finals last year, Dennison placed once during the two go-round event.

“I didn’t get enough points to make it,” she said. “It was the worst feeling in the world because I thought that I already had a qualified.”

Dennison said it’s been about four years since she’s been to the INFR as breakaway qualifier. As for barrels, it’s a bit longer than that.

“It’s been a while since I’ve qualified,” she said. “Because of what happened to me last year I wanted to be more consistent and on top of my game.”