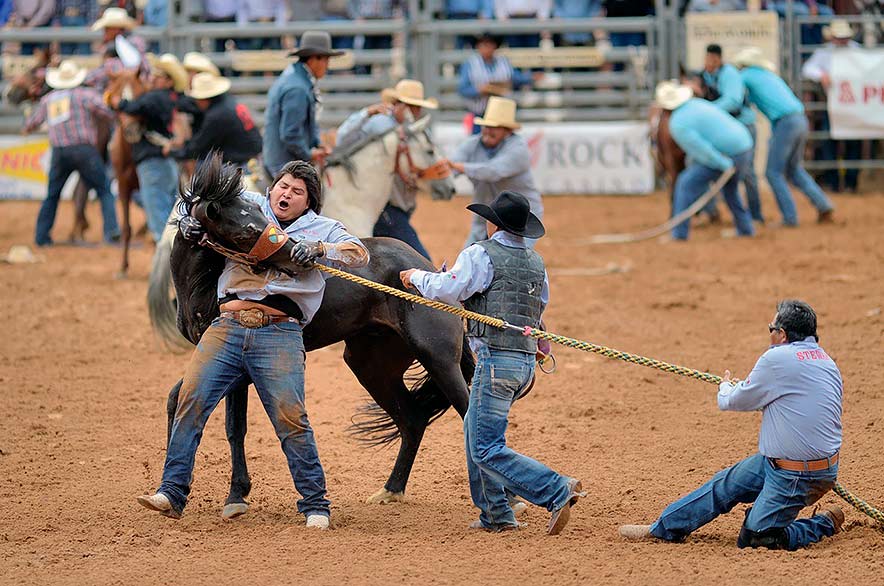 File
Daniel Etsitty of Team Stewart attempts to saddle up their ornery equine during the wild horse race at last year’s Gallup Intertribal Indian Ceremonial Rodeo in this file photo. This year’s event has been canceled due to the coronavirus pandemic.

The Gallup Inter-Tribal Indian Ceremonial is the latest event to fall victim to the pandemic caused by the COVID-19 virus.

The 10-day event was canceled earlier this week. The organizers were hoping to move forward with hosting this year’s event, which would have celebrated its 99th year. The events had been scheduled for July 31 to Aug. 9.

“The main thing is the safety of everybody,” Ceremonial board president Kyle Tom said. “For a big gathering like the Ceremonial we were looking at ways of putting on a scaled back version with a powwow, rodeo and a art show.”

Tom said the organizers also considered hosting a one-night performance while adhering to social distancing practices. They also contemplated on live streaming the event but the planning and implementation to do that seemed implausible.

“The logistic behind that with the facility, video crew and volunteers to stream our event would have taken more time than we had,” he said. “We still had a little bit of hope that it would happen but instead of things getting better in April and May things were getting worse.”

In recent years, the organizers had added an old-school flavor by adding rodeo events from yesteryears such as Buffalo Riding, Hide Race, Pony Express Race and Wild Cow Milking.

Then-board president Beverly Byerley said the Ceremonial felt a need to bring back the old-school rodeo, as a way to reminisce what it was like back in the old days.

“Last year we had a good bunch of folks there and they really enjoyed what happened 30, 40 years ago,” Byerly said to the Navajo Times. “I think that’s what it’s going to take to make the Ceremonial great again, bringing back what we used to do back in the old days.”

Some of the events canceled this year included the MegaBucks Bull Riding, Iron Cowgirl Challenge and the open rodeo, which featured a short round performance.

For the past few months, Tom said he’s been in contact with local and state authorities on developing ways to keep the Ceremonial going but there were a number of factors that resulted in the cancellation.

Tom said he talked to Gallup mayor Louie Bonaguidi last week and the new mayor informed the Ceremonial board that with the city has being on furlough so they had to cut back their staffing at Red Rock Park.

And with the pandemic affecting the way we shop, Tom said their partners and sponsors have been hit hard financially.

“They have taken a huge hit,” he said.

Thirdly, Tom said they had no choice but to cancel due to the state’s restriction on large gatherings.

“After I had my meeting with the mayor he said it’s better off to look at next year, which we anticipated,” he said. “The board met and we all agreed that the health and safety is our first and foremost concern.

“It wasn’t a risk we could take for the safety of our performers, buyers, vendors and visitors,” he added.

To his knowledge, Tom said the Ceremonial was canceled one other year when there was some protest about the living quarters for some of dancers.

“Over the past 99 years, the Ceremonial has gone through the Great Depression, through various wars, big epidemics and financial crises,” he said. “It’s endured a lot through all those years and the only other time it’s been canceled is when there were protesters.”

As one of the biggest economic drivers in the area, Tom said the cancellation of the Ceremonial is going to be felt.

“The economic impact for the Intertribal Indian Ceremonial is going to be a pretty big blow,” he said.

Because of the economic impact, Tom said he wanted to keep the Ceremonial going, as it will affect a lot of the self-employed Native American whether they are in the food industry or involved with selling their crafts.

“There’s a lot of people that make their money that depend on the tourism industry with an events like ours,” he said. “They have been hit since March and I hope our community can keep our artists in mind. They’re struggling right now.”

And although the organizers are set on making plans for next year’s event, Tom said it’s going to be sorely missed.

“I know that the Ceremonial is a family tradition,” he said. “It’s not only a generational event for us, but it’s a part of people’s family. They look forward to come in and be in certain dance groups or watching the rodeo or buying from their favorite artists and looking to see who’s won Best in Show.”