U of U grad persevered, now sets sights on grad school

Shaniah Chee was sitting in her mother’s truck outside Monument Valley High School, Utah, where she graduated from four years earlier, because she was trying to connect to wi-fi. The wi-fi at her home wasn’t strong enough to load the video they were trying to watch. Chee and her mother, Christine Rock, were trying to watch the University of Utah’s 2020 virtual graduation, which Chee was a part of. The graduation where she was recognized as one of the “Outstanding Undergraduate Researcher Awardees.” 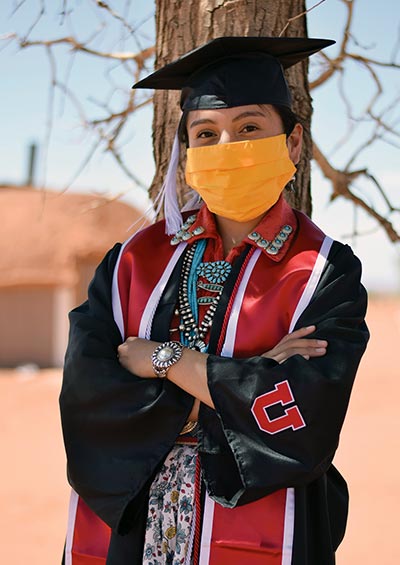 Navajo Times | Ravonelle Yazzie
Shaniah Chee of Monument Valley, Utah, was recognized as one of the “Outstanding Undergraduate Researcher Awardees” from University of Utah in Salt Lake City, Utah this past spring. She earned her bachelor’s degree in anthropology.

She also received the Larry H. and Gail Miller Enrichment scholarship that’s awarded to five students every year. “I was struggling through my freshman year,” Chee remembered as tears fell down her face. “I really wanted to come home.” But she would put on her running shoes and head to the Wasatch Mountains near her campus and pray to the Holy Ones.

“They’re just powerful, those mountains,” she said. “I was like, ‘I’m not alone.’ The Holy Ones, they’re watching me. And when I would run out, I would say a few prayers and blessings and thankful for how I got here today.”

Chee is a first-generation college graduate and it’s all thanks to her mother and grandparents who never stopped encouraging her to follow her academic dreams. She recently lost her paternal grandfather who was one of her biggest supporters.

“Just to imagine him not being there and not having my family there to celebrate with me, it’s just heartbreaking,” Chee said. “Then having to wait until December to actually have my commencement walk across the stage to receive my diploma.”

It hasn’t been easy for Chee but she has persevered. It was a difficult transition for her from a rural community on the rez where her graduating class was fewer than 50 to Salt Lake City, home to over 200,000 people and a campus community of almost 25,000 students.

Despite these difficulties, she even held her university’s Miss American Indian Woman 2019-20 title. She came as a nursing major but later switched to anthropology with a minor in Native studies. “A few weeks into my nursing classes, I was like, ‘Nope, this is not for me,’” Chee said with a laugh. “I don’t see myself in this position. I’m so emotional and I would cry with my patients if I were to be in that position. “So, I decided to take anthropology,” she said. “I’ve always been interested in the similarity of cultures and the connection that we all have with one another.”

This is where her scholarship and research truly blossomed. “It was really tough my senior year,” she said “I just did everything all at once, it seems, but I’m just glad it’s done with and another chapter awaits. So, I’m excited for that next chapter.” Chee is going to take a gap year before continuing to get her master’s degree.

“The plan is just to enjoy my year off and just take in my surroundings,” she said. “Learn and appreciate what I’ve been through. And just to take that time. I’ve been in school for 16 years now.” She will spend the next year learning more about Navajo culture and language.

Chee wants to learn ceremonial Navajo songs. In the future she hopes to create a summer language and culture camp. One used to happen annually but has since stopped. These camps were invaluable to Chee growing up. “I made my first ring there,” she said. Every step of her growth, her mother was there to support her.

“I’m really proud of her accomplishments,” Rock said. “She’s always been a go-getter. She’s, I think, our overachiever in the family.” Rock said her daughter always wanted to do more in her life and this was her driving force. She didn’t let friends distract her from her end goal.

“She always didn’t want to be a statistic,” Rock said. “I think some of the things that her friends have said and growing up in high school, she’s, like, ‘No, I’m gonna prove this wrong and I’m gonna be able to do this and fulfill my goals and get somewhere in life.’ She did that.”

Now, Chee is at her family’s homestead in Monument Valley, Utah, taking care of her family’s corn fields and sheep.