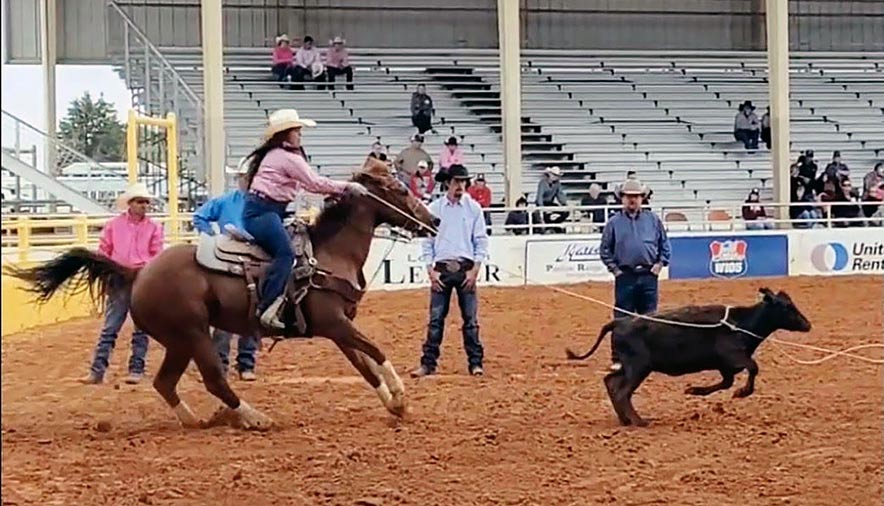 Winning a state title for Faron Candelaria Jr. and Kadin Jodie took years in the making.

The first-time state champions will represent the Land of Enchantment at the National High School Finals Rodeo, which is scheduled for July 18 to 24 in Lincoln, Nebraska.

Tsosie took third in the bull-dogging event while Wood placed fourth in the bull-riding year-end standings.

In the junior high division, Kayden Stevenson placed third in the boys’ breakaway event as the Crownpoint cowboy is headed Des Moines, Iowa, for his finals June 20 to 26.

“I’m just happy that I won it,” Jodie said of her state title. “My cousin had won one before and I wanted to bring another home.”

The Crownpoint High sophomore won her event by a mere 3.5 points over reserve champion Evann Segura.

“Everybody ropes really good,” she said. “You have to be on your ‘A’ game because nobody backed down. From first to fourth there was an (11-point) difference.”

Jodie roped 2 of 3 draws in this tight race at the state finals, which was held on Memorial Day weekend in Lovington, New Mexico.

“My game plan was to rope all my calves,” she said. “In the first round I placed third.”

In the next round, though, her calf broke left and she missed.

“I ear-topped it but all the girls behind me missed too,” she said, “so I still had a half-point lead going into the short round.”

In what was perhaps her best performance of the year, the Crownpoint cowgirl turned in a sizzling 2.1 first-place run in the short round that secured her state crown.

“I usually don’t get nervous but I was really nervous,” she said of her final performance.

Nonetheless, she passed that test with flying colors.

Candelaria, meanwhile, had a much easier time winning his first state title, having bagged the championship after his first-round performance. 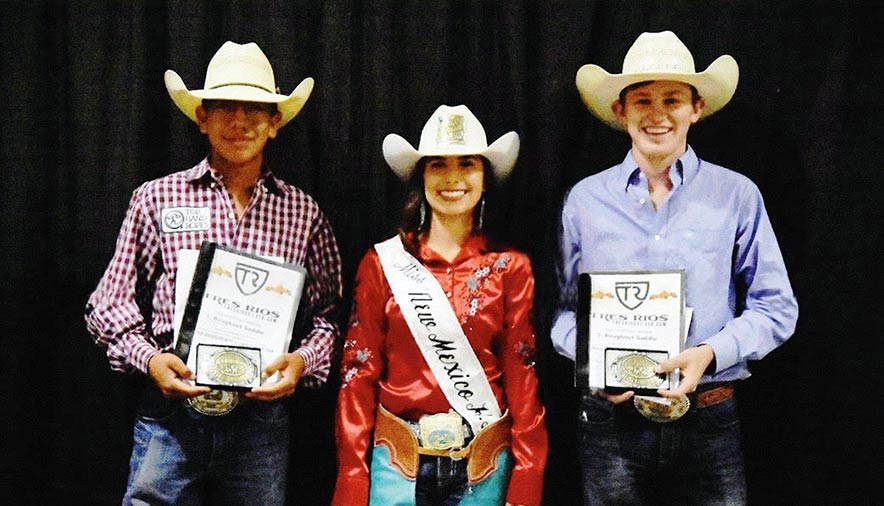 Despite the two penalty runs, Candelaria said they had “a good finals.”

“We just caught our steers and knocked them down,” he said.

The Los Lunas Valencia High junior credited this year’s team-roping field for pushing him and Taylor.

“The completion was tough all year long,” Candelaria said. “My dad challenged us all year to knocked every steer down and I felt like we did that.”

Before this year’s state title, Candelaria said he’s finished as the junior high reserve team-roping champion his seventh and eighth grade year. At that level, he also was a reserve champion in the boys’ breakaway.

“After six years I finally won a state title,” he said.

As for nationals, Candelaria said he’s looking forward to the competition.

“We’re ready and honestly we have a good chance to win a national title this year,” he said. “Taylor is roping smart and I’m feeling good. We’ve roped a lot and we know what to do to win a gold buckle.”

Jodie is also looking to make some noise in Nebraska this summer.

“I want to rope all my calves and make the short round,” she said. “I’m going to do whatever I can to get ready.”

Looking back at this year’s race for first-place, the Crownpoint cowgirl said she’s had her share of hard luck as she trailed four other ropers at the conclusion of the fall season last November.

“At one of my rodeos I missed both of my calves,” she said. “If I had roped them, I would have probably secured my spots earlier in the season.”

After a so-so fall season, she placed at nearly all of her spring rodeos on Piggy, her trusted sorrel mare.

“She’s makes it easy for me,” Jodie said of her equine. “She can really get up there. She’s faster than my other horses and she has a good stop.”