Chinle High have received a gift from alumnus Kalani Simeona – $80,000 worth of custom-built weightlifting racks for the weight room. 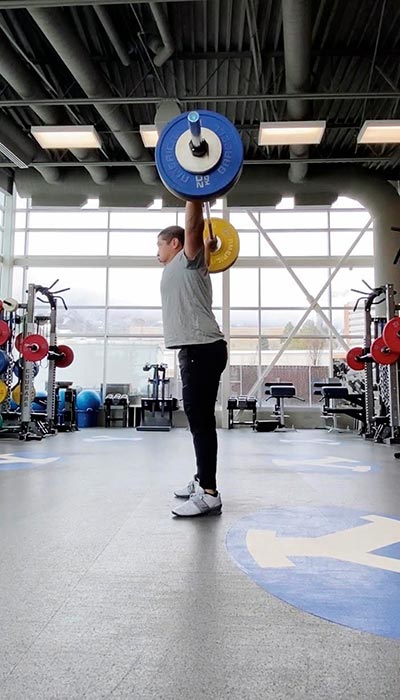 Submitted
Chinle High alumnus Kalani Simeona entered a weightlifting competition and won $80,000 worth of custom-built weightlifting racks for the Chinle athletic program. The equipment was donated by Sorinex, one of the most prominent gym equipment providers in the country.

The equipment was donated by Sorinex, one of the most prominent gym equipment providers in the country.

In 2020 the company hosted a competition where participants can nominate a school that they think are deserving of new gym equipment, and Simeona, a member of Chinle High’s class of 2011, won.

Simeona is assistant strength and conditioning coach at Brigham Young University. He’s a former football player and track and field athlete from Chinle High and is one of the few Native Americans to be coaching at a Division 1 college.

“If you’re a strength and exercise coach,” Simeona said, “whether your high school, college or pro, you’d want Sorinex equipment in your facility because its top of the line.

“It’s like the iPhone to an Android,” he said, “it’s everything. You can literally do whatever you want in these racks, and with their equipment they’ll last forever.”

For the past seven years, Sorinex hosts Squatober, where participants are provided with exercise programs to help them complete the challenge of doing squats every day during the month of October.

Bert Sorin, president and co-owner of Sorinex, stated that Squatober’s goal is to build a community among athletes while also promoting a healthy lifestyle.

“Squats are known for being a very difficult, painful, punishing exercise,” Sorin said. “But if they’re programmed correctly, we want to show people that not only can you do them, because they’re very beneficial to your health, but also we can be brought together as a group through a unified struggle.”

Squatober proved to be a success with thousands of participants from around the world. Eventually people started asking the company to make T-shirts to commemorate the event, which Sorinex did.

The T-shirts were very popular, so much so that Sorinex decided to use the revenue they created to give back to the people who helped made their business successful.

For last year’s Squatober, it was announced to participants that they can send a short message to the company’s Instagram page and nominate a school that they feel is deserving of new gym equipment.

Simeona is a regular of Squatober, when he heard about the competition, he quickly sent in a short essay about Chinle High and how the Navajo Nation was affected by the COVID-19 virus.

“We read about some of the culture the people have there and how COVID-19 hurt the community and how a weight room would help out the community there,” Sorin said.

“We all voted on it and it looked like Chinle High School was the place we felt we could do the best for a community that would appreciate it,” he said, “so that’s how it happened.”

Sorin never visited the reservation personally, but he has heard of it from a Navajo friend that he met whenever they went on hunting trips in Prescott.

Through his friend, Sorin heard about the Navajo culture and homeland. And eventually, he heard about their struggles during the COVID-19 pandemic when the reservation became one of the hardest hit spots in the world.

Sorin believes his equipment can help Chinle youth during this time and can help them recover from the negative effects of the pandemic.

“Exercise is one of the biggest things that build confidence and abilities within young and old students that stay physically active and those who are educated to be physically active tend to live longer and have healthier and productive lives,” he said.

The new equipment was custom made to have Chinle High’s colors and logo. They arrived last week and are being set up in Chinle’s weight room.

Simeona remembers his time at Chinle and how the weight equipment (which was also Sorinex) were older than he was and were worn through years of use. To be part of the planning to get Chinle new exercise equipment is a highlight.

“I’m still pumped up and excited that Chinle got selected, because it’s my hometown,” Simeona said. “Anyone who wants to go back they can’t because of the lack of opportunities on the reservation, but they’d at least want to do something for your community and that was one of the things I did.”

Chinle Athletic Director Shaun Martin expressed gratitude to Simeona for remembering his old school and to Sorin for the generous gift.

“For me it’s awesome,” Martin said. “It’s from one of our students who came through the program, who was an outstanding student-athlete,

“For me it’s very awarding for our alumni members to come back and give back like this,” he said. ‘In a small way he just entered us in a competition and wrote a very compelling essay about who we are and what we are all about and they selected us. Its super rewarding and wonderful to see our alumni, our Wildcat Nation out there advocating for us is pretty cool.”

Sorin hopes that this donation will go a long way for the Chinle students. He is uncertain if Sorinex will continue donating equipment to schools as the company, like all businesses, took a hard hit from the pandemic. But they will continue to look for ways to give back to the community.

“Be excited to struggle well,” Sorin said in a message to Chinle students. “Be excited to try and try the hard things and not to give up.”

Simeona knows it was a tough year especially when sports were canceled – one of the few things that brought Navajos together to celebrate as a community.

“If you go into a weight room, it’s cool if it’s a basic weight room,” Simeona said. “But when it’s something customized to you and you’re going to work hard in it and you see the custom racks with Wildcats or Chinle on the back of the racks, it gives you a sense of pride, like you’re proud to be a part of Chinle High School.

“That’s honestly the biggest aspect of the weight room,” he said. “You’re proud to be a Wildcat and proud to work inside of it and hopefully this creates an atmosphere in Chinle that will create better athletes and they’ll go on to become strength coaches as well, become better than me, hopefully the new equipment will teach them to have more pride in where they come from and also have pride in their wellness and fitness.”