After year of pandemic, Diné father, son roar back to powerlifting

Justin Woodis and his son, Hunter Woodis, competed at the Natural Athlete Strength Association Colorado State Powerlifting competition in Greeley, Colorado, on May 15. 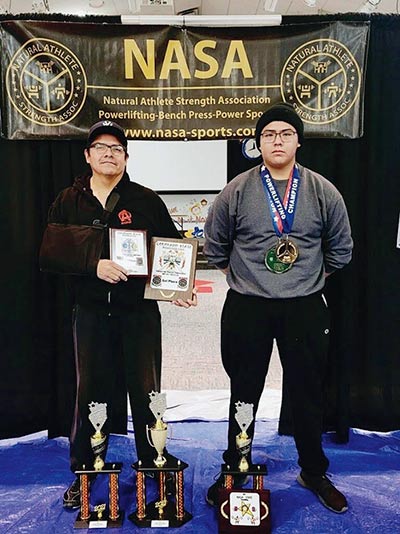 Submitted
Justin Woodis and his son, Hunter Woodis, pose for a picture after competing at the Natural Athlete Strength Association Colorado State Powerlifting on May 15. Justin placed first in all of his events he signed up for and Hunter broke some NASA records in the teenage division.

Although Justin suffered an injury when he tore a chest muscle, he placed first in all of the events he signed up for – squat, bench press, dead lift and curls.

Meanwhile Hunter broke the NASA state record for the teenage division by lifting 402.3 pounds for squats, 231 for bench press, 512.5 for dead lifts and in total lifting 1,146.4 pounds.

This was the duo’s first time competing in almost a year since the start of the COVID-19 pandemic.

Justin was always athletic growing up in the Shiprock area. He started playing baseball when he was about 8 years old.

He was 13 years old when he first started weight training in middle school, mostly to strengthen his throwing arm. He worked out for the rest of his time at school before graduating. After that, he continued to build his strength and started working as a coal miner.

“I worked underground in a coal mine at San Juan mine for 17 years,” he said. “So it was just being strong for work as well and that is actually where I got into powerlifting.

“One of the individuals who was on my crew underground told me about his competing,” he said, “and that’s how I learned about it and eventually got into it from there.”

There were no gyms in Shiprock so he improvised and learned on his own. He got help and advice from friends.

In the past eight years, he won plaques, medals, trophies and other awards. Often he placed first in the events he signed up for, such as bench pressing, squats or dead lifts.

“I think the main thing I enjoy is that it is a sport where you are doing it for yourself,” Justin said. “The work you put into it is what you are going to get out of it. You are not depending on a team, or anything like that, it is an individual event.”

Recently, Hunter joined his father in powerlifting events. Hunter had been a wrestler in high school and worked out with his dad. During his senior year, he decided to try powerlifting.

“I enjoy the training portion of the sport,” Hunter said. “It feels good when you’re lifting heavy. Granted you can’t go 100 percent all the time and at times that can be a bit discouraging because I’m constantly trying to beat my best.”

Hunter is taking classes at San Juan College. He is hoping to finish his prerequisites and transfer to Texas A&M University. The university has a powerlifting team and Hunter hopes to join.

“Powerlifting has had a huge impact on my life,” Hunter said. “It brought me and my dad together, making the bond between him and I almost brother-like.

“We’re always pushing each other to do our best in and outside of training,” he said, “but not only did it help me connect with my father it also taught me that nothing comes easy. If you want something, not only do you have to work hard for it, you’ll also have to stay consistent even when you lose motivation which is what I struggled with training to break the Colorado State records.”

Through the years, Justin passed on his training and knowledge to people who asked. However, most of those people would fall out of training or would stop coming. Powerlifting and other strength-focused sports requires training that is not like traditional sports.

“There is a lot of dedication,” Justin said. “You have to stay consistent with your training. If you start skipping training days you will see you lose out on some of your strength gains and things like that.”

Nutrition is especially important, he said, your diet impacts 80% of your strength gain, while actual weight lifting and training in the gym is about 20%.

Father and son have been competing together for a while now, training and cheering for one another at competitions. Justin noticed he and his son were the only Natives competing.

“It drives me in a sense,” Justin said. “Because we have always been stereotyped as drunk Navajos in a lot of people’s words around this area. But it pushes me to try harder to show that we are not people like that.

“There are strong people, as far as Natives go,” he said, “and we can do anything. You just have to put in the hard work and you get out of it what you get. That’s what really drives me too … people always think, ‘They’re just quiet.’ But, man, when we get on the lifting platform, they know we are there for business.”

Between the two, they lift in the 400- to 500-pound range, though Justin says Hunter is the better of the two.

Last year they competed in the Strong Men competition hosted by American Fitness in Farmington as a part of a worldwide competition. The competition is an obstacle course and requires a different training set. Despite this they placed in the top 100s.

Justin credits powerlifting for helping him not only to stay healthy, but to remain focused and stay on a good path.

Through the years he has seen many friends fall on the wayside and believes having a sport like he does would have helped to prevent that.

He wishes there were more opportunities for Navajos to try powerlifting. It may be a difficult activity, but he found it to be very rewarding.

The competition at Greeley was their first of the year and it was a great win. Their next event will be later in July at Roswell, New Mexico. Justin believes he will recover and be ready.

“If there was more stuff like this that could go on, where kids can see, they could make a positive impact and win awards for themselves,” Justin said. “That really feels good when your name is called and you go on the stage and get your award and all that.

“That self-accomplishment is really something that really lifts people up,” he said. “That’s what I look forward to and I wish there was more of that for people to do around here.”