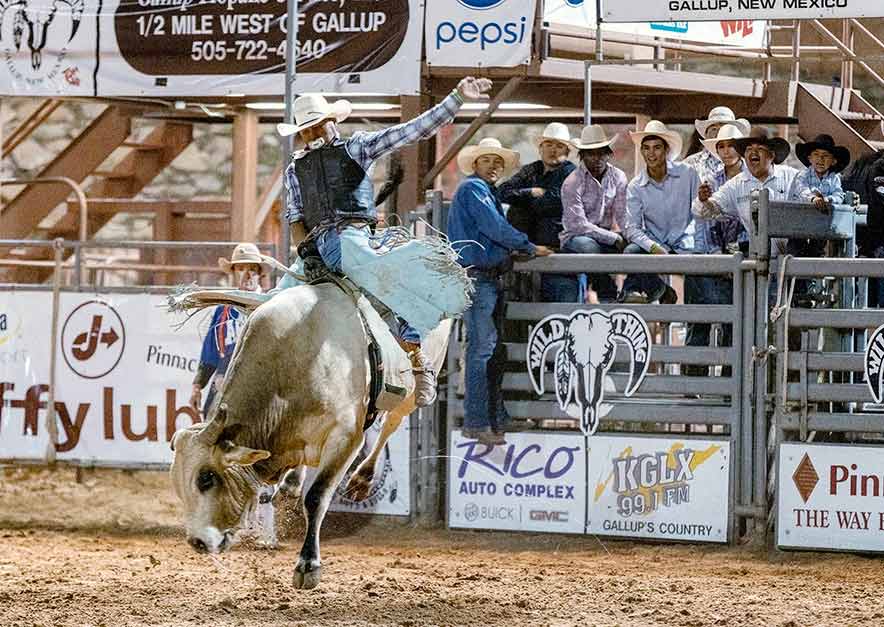 Navajo Times | Sharon Chischilly
Guytin Tsosie, 30, hangs on and stays aboard his bull on Saturday night at the Wild Thing Championship Bullriding in Church Rock, N.M. Tsosie took first place with 92 points for his ride.

Guytin Tsosie defied the odds and emerged as the winner of the Wild Thing Championship Bullriding held last weekend. Tsosie won despite taking some time away from the sport.

“It feels good to ride again,” Tsosie said. “I kind of stepped away from it for two, three years now.”

As an ironworker, Tsosie said bull riding took a backseat in his life but he never lost the ability to ride.

Despite stepping away from the sport, he showed that he could still go the distance against younger competitors.

“I guess, its just bull riding,” he said. “There is no age limit to it – it’s just the cowboy against the bull.”

“Most of them were between 18 to 25 years old,” Peterson said of past champions. “And he almost didn’t get in. I got him as a walk-up as the last one in today. He made a hell of a ride.”

Tsosie got on a bull marked as N1, one Sammy Andrews’ newest bovine in his stock. The bull spun into Tsosie’s hand for the event’s highest score.

“That is my preferred style,” Tsosie said, while adding that this was his first time to “ride up” at Wild Thing.

“Before that I always got bucked off,” he said. “I guess it was my year to finally ride up.”

The two-night event had 92 bull riders with eight other riders completing the 8-second ride.

With 89 points, Tyson Tsingine took second as he matched up with another bull from Sammy Andrews.

“Everybody was telling me that he’s going to be right there at the gate into my hand, which I like,” he said. “He was a good, strong and fast bull. He was tiny too, but when I got off I had to hit the ground running because he’s mean.”

Tsinigine said he knew his score was going to be good as he momentarily took over the driver’s seat before Tsosie topped that score.

“This bull riding is the one you want to win,” the Lukachukai, Arizona cowboy said. “I really wanted to win it, but I’m fine with second.”

With his second-place finish, Tsingine collected $5,400.

Friday night leader Sterling Furr dropped down to third after posting an 87-point ride on an Owen Washburn bull.

“He had a lot of action,” Furr said of his draw. “He kind of leapt into the air and he had a lot of kick. That’s what we call hang time, and I really like that air time.”

Furr said a bull of that caliber will get you a good score, and it was something he needed.

“I’ve been having bad luck rodeoing lately,” he said. “I’ve been going every weekend and I haven’t been riding my bulls.

“I guess I’ve been thinking about it too much, instead of slowing things down and having fun,” he added. “I’m just glad that I turned it around.”

For his effort, the Texas cowboy took home $4,320 in his Wild Thing debut, as he is looking to come back next year.

“The experience has been good and I enjoyed everything about Wild Thing,” he added.

“I’ve been kind of a slump, so it feels good to get one rode,” Betony said, while adding that he hadn’t planned on riding at Wild Thing this year.

He got into Saturday night’s draw thanks to Teddy Granger, who got him entered.

Betony said the last time he rode at Wild Thing was 10 years ago when he got disqualified.

In a two-way split for sixth, Cade Griego and Luke Mackey recorded a pair of 79-point scores with each cowboy collecting $1,260.

Filza earned that score on Friday night, as he had an option of taking a reride after his bull stopped working.

Through an interpreter, Filza said he kept his score since he was one of two riders to earn a qualified ride on Friday night.

“Last year, just only eight guys rode for 8 seconds,” Junior Patrick Souza said while speaking on the behalf of Filza.

“And he’s like ‘I’m going to keep the score because I have something safe,’” Souza said.

The two Brazilians ride in the PBR with Filza having arrived in the United States about a month ago.

“He says he’s getting better every day and every week,” Souza said. “He’s adapting to the bulls here in America.”