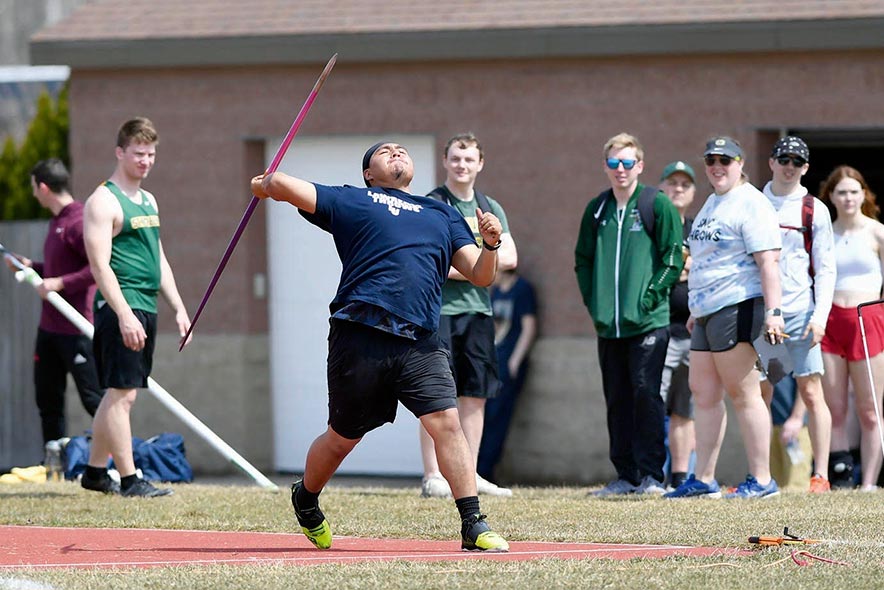 The Lawrence University freshman’s effort of 178 feet, 1 inch set a school record at the event, where he also scored by finishing sixth in the shot put.

“Everything was perfect,” said the 6-foot-1-inch Thomas, a starting defensive lineman for the football team during the fall. “I went head-to-head with my teammate Zach (Burke).”

His javelin throw was nearly 2 feet farther than junior Burke’s toss, as Lawrence finished with three of the top four spots.

After the conference title, he won the javelin throw at an NCAA qualifier at the University of Wisconsin-La Crosse, but the distance was not enough to extend his season.

During the season, Thomas worked on his technique – to improve his rhythm – after watching a film of his approach to the throw.

“Getting clean in the steps to runway,” he said. “My steps were off quite a bit.”

He was also trained to improve his flexibility to throw farther.

His specialty, the javelin throw, earned him his best results. Before the outdoor conference championship, he won the event at two meets and was second in three meets.

His secondary event is the shot put, which he scored in by placing seventh at the indoor conference championship.

Because he was busy with the indoor and outdoor track, Thomas said he could not participate in spring football camp. This summer, he has been training regularly for the season.

He is focusing on “sizing down and building strength” as he tries to play at 270 pounds, not the 280 he played last season.