‘We’ve doubled in size’: Miyamura football team preparing for the season ahead 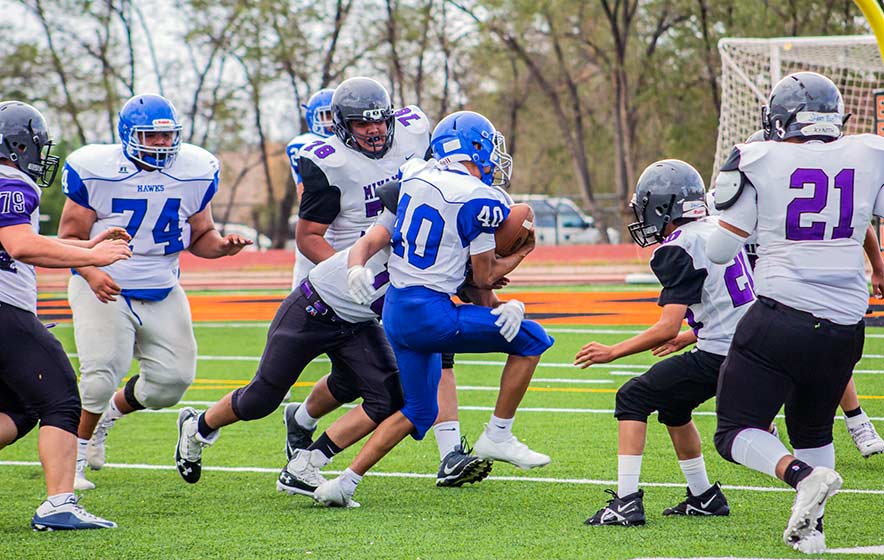 Navajo Times | Cyrus Norcross
A Miyamura defensive player takes down a Laguna-Acoma running back during a scrimmage held at Angelo DiPaolo Memorial Stadium in Gallup on Aug. 13. The Patriots travel to Aztec for its season opener on Friday while Laguna-Acoma makes the trip to Lordsburg.

The 2021 season finds the Miyamura football team on better footing.

Last season the Patriots played the role of underdog with a roster full of inexperienced players.

In fact, Miyamura played 15 sophomores and freshmen for a good part of the abbreviated 2020 season with the Patriots owning a 1-4 record.

“Realistically we played a lot of JV kids on a varsity schedule,” second-year coach Sean Reeves said. “If you look at that in that aspect I think we’ll match up OK with a lot of teams. Our kids worked out all summer and they’re still working out hard.”

As one of the smaller football schools in 5A, Reeves said it’s going to be a challenge playing the likes of district rivals Farmington and Piedra Vista.

In addition to the two Farmington schools, District 1/2-5A also has Santa Fe Capital and Los Alamos making up the five-team district.

Based on enrollments, Reeves said the two Farmington schools are one of the bigger schools at the 5A level.

“They got the numbers so they’re the teams to beat in this district,” he said. “It’s going to be a challenge for us but our kids are hungry, and you know, they’ve been working really hard so we’ll see what we end up with.”

Still, the Miyamura coach likes their chances as the Patriots have six games to work on things before they start the district season with PV on Oct. 1.

“I think we can match up with them,” Reeves said of the top two teams in the district. “I know our conditioning is good. Our strength could be better but we’re getting stronger and faster so I feel we can match up pretty well them.”

Heading into Friday’s opener with Aztec, the Patriots have 52 kids on the squad and half of those players are returning players.

“All of our kids are back,” Reeves said, while adding that the game with Aztec will serve as litmus test on how much his program has improved.

Senior linebacker Jeremiah Parades said the team experienced a lot of growing pains during last year’s slate. Coming into this season, he said, they want to improve on the little things.

“We had a hard time with fumbles and turnovers,” he said. “Our timing was just off but we’re a lot better. We’re hoping to make it to the playoffs and make a run, something this group has never done before.”

Like his teammate, right tackle Hector Hernandez said the upcoming season looks promising, as the Patriots have added some much needed depth.

“We’ve doubled in size,” he said. “We had about 25 players last year and right now we are 52 players strong, which helps because I don’t have to go a lot both ways.”

Last season, Hernandez said the team was working with only seven linemen and this year that number was bumped to 15.

“We have guys that we can switch in and out with ease,” he said. “We have the depth we need.”

To move the chains, Hernandez said it starts with the line.

“If we do our jobs we can move the ball,” he said. “Last year we missed a lot of blocks but I think were better equipped to handle that.”

This year the Patriots will turn to junior Clayton Hall at quarterback, a position he played at the tail end of the season when starter Ross Keeler got hurt.

“He played the last game and half against Gallup and Aztec,” the Miyamura coach said of Hall. “He’s a returner and then we got a lot of juniors back from injuries they got when they were sophomores.”

“They’re pretty solid,” he said. “We’ve got to work out a few things but for the most part, we’re looking pretty good.”

With a more experience squad, Reeves said they have set a few goals this year and it starts with Aztec on Friday.

“We want to win our first game, then win our district and go to state,” he said. “Those are our expectations we have but in reality I think we can go 7-3 or 8-2 maybe. I think we can make a push to playoffs with the returning group that we have. You know, we’re pretty solid and it kind of helped playing a lot of sophomores and freshmen last year.”

That push to make the playoffs is what excites Hernandez.

“It’s been along time since the Patriots had something going for them,” he said. “Being a part of this is great and I feel that we’re going to compete.”