‘It’s opened up doors for me’: Nonprofit finds success with wheelchair basketball

The Tribal Adaptive Organization was formally started in 2015 and since then the nonprofit has helped “advocate” for over 250 individuals with disabilities around the country.

With the assistance from Olympian Billy Mills, Noah was given a $10,000 grant to lay the groundwork for his organization, which has brought wheelchair basketball to the forefront among Native Americans. 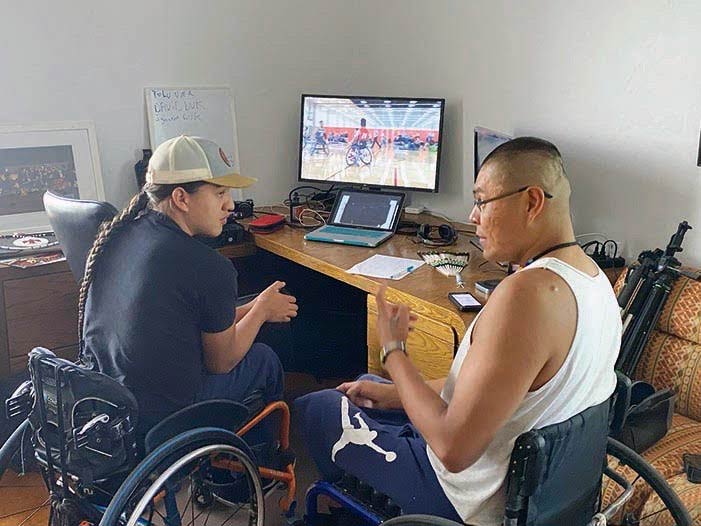 “Wheelchair basketball is our main draw and our activity but we do help facilitate other types of opportunities,” said Noah’s dad, Jason Hotchkiss. “A lot of our focus is about advocacy. There are opportunities available out there for people with disabilities but navigating the system can be really daunting and sometimes it can be really frustrating.”

The organization’s office was initially based in Durango but they moved to Farmington as a way to better reach patrons.

“We figured that Farmington was going to be a better central location for us as an organization,” said Jason, who serves as the organization’s development director. “It was just more accessible to all of the reservations we serve. The people from Dulce can get there and most of the Pueblos can get there under three hours.”

Hotchkiss said over the years his son has appreciated the sport, more so than what he grew up with.

“What it does for people is amazing,” he added. “It helps with their confidence and studies show that it improves their education and job careers.”

Through the grant, Hotchkiss said the organization has served hundreds and more and more people are loving the game of wheelchair basketball.

“It’s a great sport but a lot of what we’re doing is helping people get into better, everyday wheelchairs and get better access to services at high schools and middle schools,” he said. “We’re also getting better access to other types of sporting equipment and opportunities.”

Hotchkiss said they’ve gone through that process with Noah and they have gained a perspective on how things work.

“That perspective continues to grow,” he said, while noting that every person involved is a recipient of advocacy and in the long run they are helping Tribal Adaptive better understand how the system works.

Last year, Hotchkiss said, they got four kids fitted into brand new, custom fit basketball wheelchairs through the Challenge Athletes Foundation.
“We got together as a group and we filled out the applications, worked on essay questions and sure enough everyone got one,” he said.
Derek Parrish, a pupil who has benefited from the organization, got a new hand cycle in the process. This coming fall, Parrish will join the wheelchair basketball team at Southwest Minnesota State University, a four-year institution in Marshall, Minnesota.
“Derek is a good example of how our nonprofit organization works,” Hotchkiss said.
Parrish said he’s very grateful the Hotchkiss family steered him in the right direction, especially after his violent altercation in 2014 when he was ran over by another person.

“It’s been very therapeutic,” he said. “Being able to find this sport after my injury has been a big help. It’s opened up doors and opportunities for me.”

As the program’s director, Hotchkiss said in the past they have hosted numerous one-day camps but their focused has changed.

“Instead of having a four- to six-hour camp we decided to focus on having a weekly program,” he said. “We have something in place for two hours every week and San Juan College has been awesome about hosting that.”

Before the global pandemic altered their program, Hotchkiss said there were eight individuals who showed up for their weekly practices.

Earlier this year, they put together a team to compete in a tournament hosted by the University of Arizona junior wheelchair basketball team.

“That was huge for us,” Hotchkiss said. “We got our butts kicked in the first game but in the second game we kind of pulled it together. Noah was coaching the team and he made some adjustments and we came back and won that game.”

Hotchkiss said the Arizona junior team and a team from Denver was supposed to make the trip to Farmington for a pair of games but that got canceled due to the pandemic.

Besides the tournament in Tucson, Hotchkiss said they sent five Native youth to the University of Illinois for a wheelchair basketball camp. The success of that experience is something they want to continue.

“We want to help facilitate that again,” he said. “For some it was the first time they’ve really been independent. Like any program that brings youth to a college campus for a summer it kind of starts to plant that seed in their minds that ‘I could do this.’”

With the pandemic, Hotchkiss said the nonprofit group has taken a step back to examine the stresses that come with the COVID-19 virus.
“There’s a mental health crisis going on and this is true for able-body and disable-body alike,” he said.

Over the years, Hotchkiss said they’ve been talking about incorporating that feature into their wheelchair basketball program.

“Sometimes those things are very difficult for people with disabilities to access,” he said. “We believe that our youth might be more comfortable exploring that as a group.”

To help in that aspect, Hotchkiss said they applied for a grant through the Con Alma Health Foundation to develop a life-skills component to their program.
“We’ll probably do it regardless whether we get the grant,” he said. “But if we get the grant that would make it more affirming for us so that we’re on the right path with the way we’re thinking about it.”