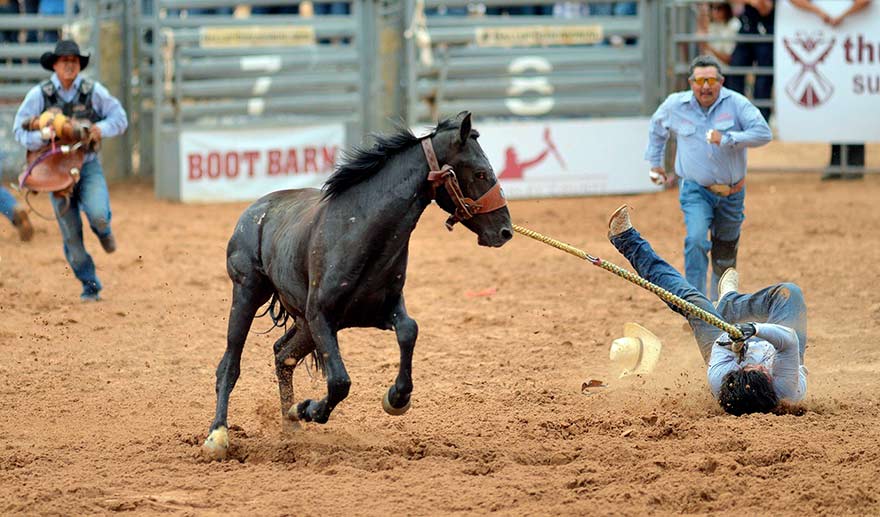 Navajo Times | Donovan Quintero
Travis Allen tries to hold onto to the lead rope during the wild horse race at the 98th Annual Gallup Intertribal Indian Ceremonial Rodeo at Red Rock Park. The Biggie Smallz team emerged as the winners on Sunday afternoon.

In their short professional careers, the Biggie Smallz wild horse racing team is making a name for themselves.

“This means a lot,” shankman Cody Billiman said. “This was our second show coming in and we actually won it.”

Billiman along with mugger Cleo Gilbert and rider Shane Slinkey didn’t look the part of a novice team, as they were the first to get their ornery horse around the barrel at the far end of the arena at Red Rock Park.

“I’m surprised that we won this,” Slinkey said.

Slinkey said the team, which is made up of NTUA employees, was formed not too long ago and they competed in one race before the Ceremonial rodeo.

“We actually have a good team,” he said. “We just kind of figured each other out that first time.”

Even though they are a newly formed team, Billiman said they have some ranching experience.

“It’s wasn’t hard to learn because we grew up around horses,” he said.

Moreover, he said they understand their roles while stressing the importance of teamwork.

“That’s what it takes,” he said. “My team did a great job of working together. These are my brothers and we watch each other’s backs.”

Of the three members, it was Gilbert who was first to get acquainted with the untamed horse. Gilbert said once the bucking chutes were open he grabbed ahold of the horse’s head but the feisty equine was having no part of it.

“He actually fell with me,” he said. “Once he got back up I saw my rider on the side and for his safety I grabbed (the horse) with a firmer grip.”