‘It touched our hearts’: Milsap brings back memories of ‘good old days’ 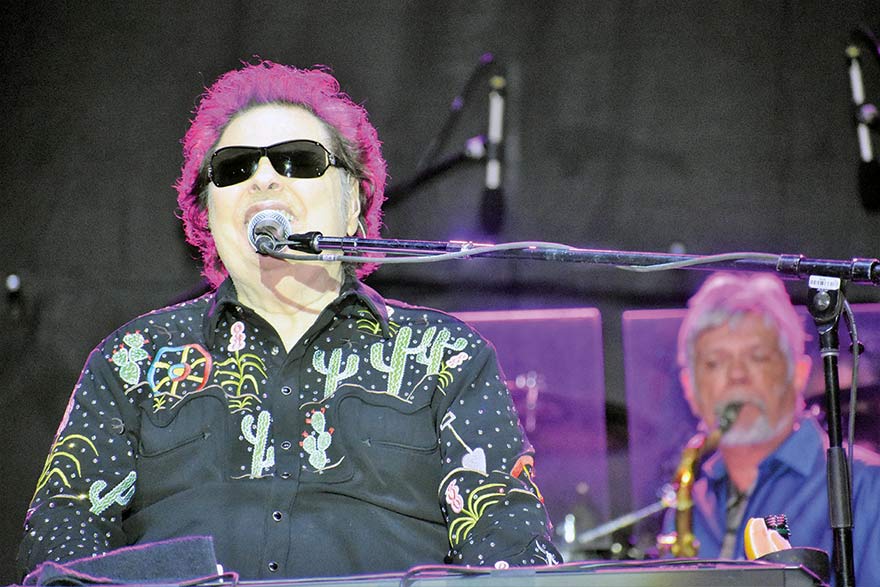 Whether or not you’re familiar with recording artist Ronnie Milsap, there’s a good chance you’ve heard him on the radio, if not sung along with his familiar tunes. He is one of those musicians whose songs are played again and again as many of his hits are timeless and span generations and genres.

“His music reminds me of when I was little and my dad used to take us to the ranch,” said Regina Keedah. “The old country music brings us back home.” As one of the most influential country music artists of the 1970s and 1980s, Milsap incorporated rock, pop and soul elements that have transcended boundaries, topped the charts, won Grammies, and earned him induction into the Country Music Hall of Fame. “It brings you back,” said Roxana Yazzie of Milsap’s music.

“You start reminiscing. He is an iconic country singer. His songs make people happy.” Tunes like “It Was Almost Like A Song,” “Smokey Mountain Rain,” “(I’m a) Stand by my Woman Man,” “Any Day Now,” “Stranger In My House,” and “(There’s) No Getting over Me,” are ingrained in our memories and continue to live on.

Last Thursday, Milsap delivered these standards and more to a full house at Fire Rock Navajo Casino’s outdoor music pavilion. Fans of all ages came out to enjoy the show that many said brought them back to a simpler, more carefree time. “It was awesome to the max,” said Bennett Thompson, who was moved to dance during the show with his wife Lynette. “Ronnie Milsap is a legend of the old-school singers.”

Joanne Goodluck and her daughter Lynette Hardy, long-time Milsap fans, attended the show together. “I grew up listening to this kind of music, especially riding around in the truck with my mom,” said Lynette Hardy.

Hardy feels the older music has soul and meaning that a lot of today’s music lacks. “It brought memories back, like when you first fall in love and you heard these songs,” said Goodluck. “This is the good music. It goes to the heart.” Goodluck said she longs for the “good old days” when people respected each other and there wasn’t so much fear, crime and violence in the world.

The daughter of Navajo Code Talker John Goodluck, however, said the problems of today won’t stop her from enjoying life and attending concerts like this one. “I’m not going to give in,” she said. “I’m going to do what I want to do. That’s what my dad fought for in World War II.”

In his youth, the vision-impaired Milsap suffered a lot of hardship but developed a love for music and studied piano at the Governor Morehead School for the Blind when he started listening to rock and roll. It was a time when many of his inspirations like Elvis Presley, Ray Charles and Little Richard came blasting onto the scene and revolutionized the music industry.

“He loved Ray Charles, who was his musical idol,” said band member Rhonda Hampton. “And he loved playing with Elvis Presley,” she said. “Elvis would hire him to play his private parties.” In the 1960s Milsap moved to Memphis, Tennessee, where he became a session player for recording projects including several with Presley, such as smash hits “Don’t Cry Daddy” and “Kentucky Rain.”

Milsap’s big break came when he moved to Nashville in the early 1970s to focus on country music. He toured with Charley Pride as an opening act and recorded his first top hits, including “Pure Love,” “Please Don’t Tell me How the Story Ends,” “(I’d Be) A Legend in My Time,” “Daydreams about Night Things,” and “What a Difference You’ve Made in my Life.” Hampton, who has sung and played guitar with Milsap for 25 years said, “Music is his life.”

“He loves music and he loves his fans. ‘What A Difference You Made in my Life,’ is actually one of the songs that talks about his appreciation for his fans,” she said. Hampton said Milsap “loves our country” and is always expressing gratitude to those who serve in the U.S. military and law enforcement. Friends Candice Craig and Sherietta Martinez said they appreciated seeing Milsap in the intimate setting at Fire Rock that wasn’t overcome with lines, traffic or security.

“It’s smaller and more personal,” said Craig. Martinez said Milsop’s music brought back vivid childhood memories and milestones in her life. “I was three or four years old when his first record came out. My parents always used to listen to Ronnie Milsap,” said Martinez. “I’m glad that Fire Rock is bringing entertainers back here and allow us to relive those memories, whether they’re good or bad. We were almost in tears.”

Craig, a singer herself, says she appreciates the old-school authenticity of the Milsap’s music and lyrics. “It’s hometown, respectful music that’s not derogatory,” said Craig. “It’s the wholesome kind of music that we grew up on. It brings us back to all the old times when all the values were different. It was just good healthy fun.”

Arlinda Leslie says she’s been a fan of Milsap’s since she was two years old. “I like classic music,” said Leslie. “I’m glad Fire Rock and Northern Edge are bringing back a lot of the old guys. It’s cool. That’s what we like!” Leslie and her husband came back home to Gallup from Farmington just to see Milsap. “It’s awesome they’re bringing all of this back for the community—back to the way things used to be,” said Brandon Leslie.

Today, the 77-year-old crooner still keeps a busy touring schedule and audience members were glad he brought his band to Gallup. “I really enjoyed the show. It brought me back to when I was a little girl and memories of my grandma,” said Durinda Dokey. Dokey said the romantic music also made her miss her husband, Willard Bia. “He’s working in Alabama,” she said. “He usually comes with me. I just want to say I miss him and I love him.” Hampton said Milsaps’ back-up band members have been with him for combined decades. “We all take care of Ronnie,” she said. “We all care about him and love him and watch after him. As long as he keeps going, we’ll be here.”

Even in the sunset of his life, Milsap continues to make new fans. Young newcomers to his music like Miles Roy Calladito said they enjoyed the show. Calladito’s favorite song was “Stranger in the House.”

“I liked the beat and the rhythm,” he said. “I had never seen Ronnie Milsap live, so I thought, ‘Why not?’ If you have an opportunity to see a new artist, just go ahead and do it. It’s a good experience!” When the show concluded and audience members started filing out, many agreed the memories that Milsap’s music evoked will remain —“unforgettable.”

“I want to thank Fire Rock and Mr. Milsap for coming out and making us remember all these memories,” said Martinez. “It’s worth the travel, the money, the time. Even if for just a moment it was very valuable—it touched our hearts.”