Schools on alert due to COVID-19 surge 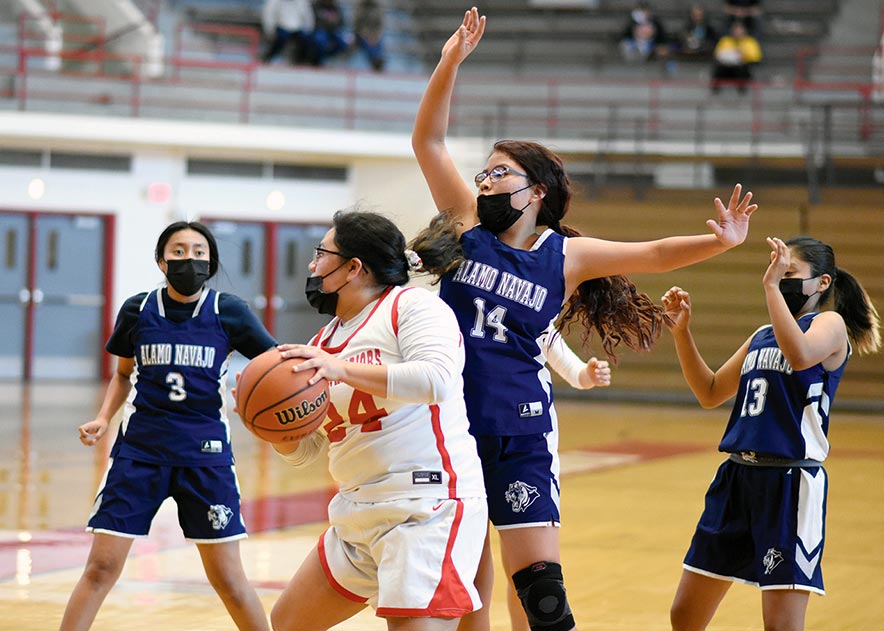 RY-PineHill5.jpg Special to the Times | Ravonelle Yazzie Pine Hill Lady Warrior Tenisha Alonzo (24) looks for an open teammate against Alamo Navajo on Dec. 29, 2021 at the Striking Eagle Native American Invitational. The Pine Hill athletics are on a two-week pause due the recent surge in COVID-19 cases.

The surge in COVID-19 cases has put some high schools on alert.

Some schools will limit fan attendance while Pine Hill High has placed its athletics on pause.

On Thursday the Navajo Nation’s president’s office reported 405 new cases, the highest daily count for the Nation during the pandemic.

Due to these high numbers, Pine Hill temporarily suspended all athletic sports competition for two weeks as the BIA school moved into hybrid learning on Monday.

In a statement, Pine Hill School Superintendent David C. Nez said all home and away games, as well as tournaments, will be suspended from Jan. 10 to Jan. 25.

“The education leadership team in conjunction with the superintendent will assess the situation at that time, and if the suspension needs to be continued that will be announced,” the Pine Hill statement said. “We are implementing this severe action as a precaution in preventing further spread of the virus. The safety of our students, staff, and community members is at the heart of these decisions.”

“There’s a surge in our community and all of this is to help prevent against that surge,” Pine Hill Athletic Director Carlett Daniels said. “I don’t think there is any fault in doing it. We’re thinking about keeping kids safe, keeping people in our community safe.”

As of Wednesday, no positive cases had been reported on the basketball team, Daniels said. Last fall they did have a few isolated cases on the volleyball team.

“We had a couple of kids that came down with it, but we’ve been doing all the protocols that we’re supposed to be doing for those types of things,” he said. “I think we went a year-and-half without any kids catching it, and this year we had kids here and there catch it.” 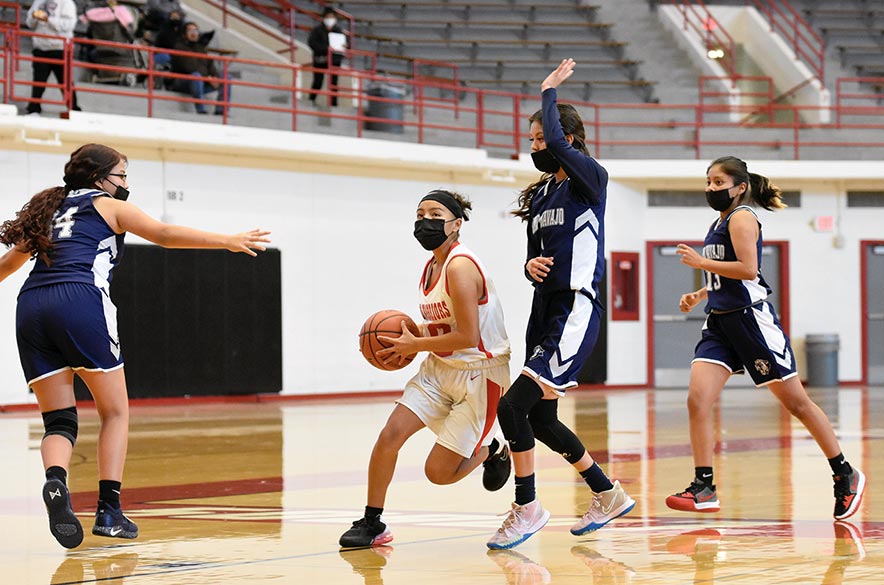 Special to the Times | Ravonelle Yazzie
Pine Hill sophomore guard Kairi Etsitty goes up for a layup against Alamo Navajo on Dec. 29, 2021. Due to the recent surge of COVID-19 cases the Pine Hill athletics are on a two-week pause.

Daniels said Pine Hill had five games scheduled, three girls and two boys, during the two-week pause and he’s not sure if they can be rescheduled.

“It’s going to be hard to reschedule those games,” he said. “Teams are going to be not as willing to schedule somebody in a tight schedule.

An although all games have been canceled, the sports program at Pine Hill can continue to hold practice during this pause.

“We’re still happy to practice,” Daniels said. “We hope to get through this, and we don’t want any more time off. Our kids are eager and hungry.”

In Arizona, Window Rock High declared an unexpected half-day on Wednesday before announcing they will be returning to online learning until the end of the month.

The school’s superintendent, Shannon Goodsell, said virtual learning will be done due to high COVID-19 cases in the area and that it’s being done for student safety.

Window Rock High did say that athletics for the varsity team will happen though what that will entail is still unknown.

The school district also announced that they will begin food deliveries on the school bus routes and also give away food at the high school for their students. Further information can be found on the WRUSD website and social media.

Ganado also returned to remote learning earlier this month. Food and work package deliveries for students who do not have access to the internet are underway.

The Ganado school campuses will be closed until January 31st as well.

Chinle High remains open, but due to the mass wave of cancellations and the threat of the surge, they’ve heavily modified their sports schedule.

For upcoming games, Chinle’s freshman and JV games have been canceled, leaving only varsity teams to play against Monument Valley, Alchesay and Window Rock.

Chinle will still allow fans, but for away matches in Alchesay and Window Rock no spectators will be allowed.

Attempts to reach the schools so far has been unsuccessful.