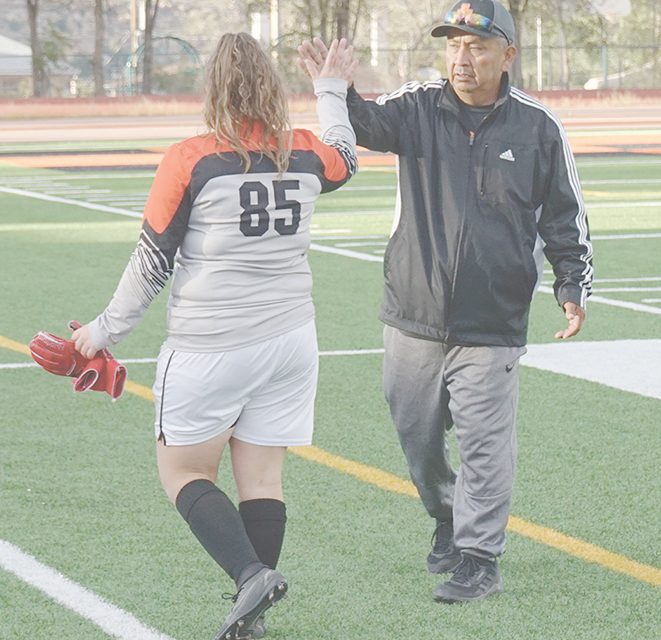 File photo | Quentin Jodie Aztec head coach Leroy Nelson high-fives Lady Tiger goalie Marissa Day on Oct. 6 in this file photo. The Nelson-coached team advanced into the second round of the Class 4A state soccer playoffs with a 1-0 win over Los Lunas Valencia. Aztec plays No. 3 St. Pius in the state quarterfinals.

It wasn’t the start they were looking for, but the Aztec girls soccer team prevailed in the opening round of the Class 4A playoffs.

“We had a rough start as far as possessions,” Aztec coach Leroy Nelson said. “We had to set things down, but Valencia’s defense was very good.”

Rheala Herrera scored the game’s only score as the Aztec junior knocked in her 23rd goal of the season.

Nelson said they had other opportunities to score but were held in check.

“They’re well-disciplined as far as their defensive line,” he said of the visiting Lady Jaguars.

In other tournament action, No. 10 Bloomfield defeated No. 7 Kirtland Central 3-2.

The Aztec coach said St. Pius has one of the state’s most storied girls soccer programs. The Lady Sartans have won 10 state titles, with the last coming during the 2020 season.

“They’re really tough, and as far as I can remember, they’re always in the top four in the state,” Nelson said. “They’re well-disciplined, and you could see that in their players. They have a very good attacking formation, and they can take you off guard.”

Regardless of today’s outcome, Nelson said he’s proud of how far his kids have come this season.

“I lost half of my varsity starting girls to injuries,” he said. “Three of my starters had ACL and head injuries. But to be honest, our younger kids stepped up and filled in those gaps.

“They proved that they wanted to play,” he said. “They’re very coachable, and they’re eager to learn, and I feel like we achieved a lot this year.”