Long before she could remember, Justus Manuelito liked to kick things around. 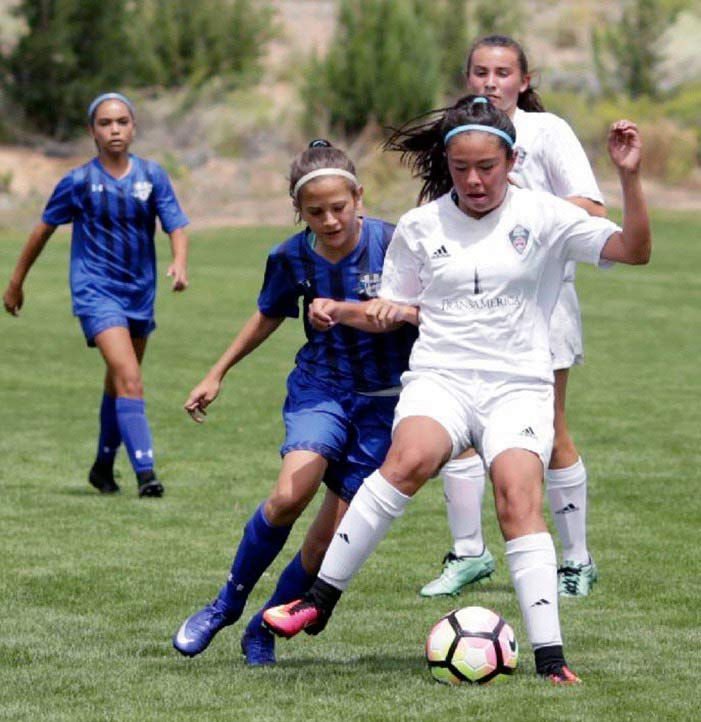 That was abundantly clear, according to her dad, Harold Manuelito.

“When she was a baby she just kicked anything that was in front of her,” he said.

That innate characteristic of wanting to kick things has led Justus to discover a passion for soccer. In fact, the Miyamura High senior has been playing soccer since she was four years old.

Thanks to an offer from Alderson Broaddus University, Justus will be playing soccer beyond high school as she is going to accept a partial scholarship from the four-year university in Philippi, West Virginia, next week when she signs.

“I always wanted to play college soccer and I feel like they have a great program there,” she said. “They have a great coach (in Jaron Hulme) and I’ve heard nothing but positive things about him. The players that I’ve talked to said he’s made a huge impact to the program.”

In addition Hulme’s repertoire, Justus chose the private university for religious reasons as she is going to pursue a degree in physical therapy.

“I’m going to a place that is faith-based and I know God will be out there to protect me,” she said. “It’s a place that He’s led me to and I know that’s where I’m supposed to be.”

“I think this is God’s will so she’s in the right place and this is where she is meant to be at,” Elise said of her daughter. “I know the school she’s chosen is very far but I know she’ll be taken care of and I know that she can take care of herself.”

While playing for the NCAA Division II ABU team, Justus said she’s willing to play any position for the Battlers squad.

“I’m comfortable playing anywhere on the field, and it really depends on where my coach needs me,” she said. “I really like helping my team bring the ball up field but at the same time I like shooting and scoring.”

Justus credits her parents for this opportunity as part of her development included joining several club teams over the years.

“They made a lot of sacrifices for me,” she said of her parents. “They knew my love and passion for the game and that is what drove us to travel and do things to help me play at a higher and faster pace.”

At first she started with the Gallup Youth Soccer League, scoring 20 points in her first youth game.

As she got older she joined several club teams in Albuquerque – New Mexico Rush SC, Rio Rapids SC and the New Mexico Youth Soccer Association with the latter having an Olympic Development Program.

“She had to do tryouts and at every tryout she was evaluated to get selected,” her dad said. “Nothing was guaranteed because every year girls come and go.”

According to her dad, Justus made the Rio Rapids team three years in row, adding that being around the club soccer scene gave her plenty of opportunities.

“It was good that she was exposed to that because she’s been around competitive players across different states and different nationalities,” he said. “The skills she developed gave her a lot of confidence and she’s going to be needing that for college.”

With his daughter going off to college on an athletic scholarship, Harold said he anticipating this.

“It’s something that I already expected,” he said. “I’ve worked with her one-on-one since she was little and she just has a passion for playing soccer. Her work ethic is there so she’s built for this.”

“I’m very happy for her,” Elise chimed in. “It was a tough road for her but she had a lot of support and encouragement. I proud that she did this one on her own and as parents you have to make things happen for them.”

Part of the sacrifices the family endured was taking Justus to practice five times a week in Albuquerque.

“Coming from Gallup there was a lot of late night driving,” Harold said.

And then there were the tournaments in places such as Denver, Dallas, Las Vegas, Houston and California.

“I think we wore out three trucks with traveling,” he said. “It was all good because we managed. We just made things work.”

Besides Justus, the Manuelito family made those same sacrifices for older sibling Hunter and younger brother Harold Jr.

“All of my kids play soccer,” said Harold, who retired from rodeoing in 2004 to concentrate on his kid’s endeavors.

“I used to steer wrestle and I won a few rodeos around here,” he said. “I stopped competing for my kids. They needed me to spend more time with them.”

Even though he had to give up the sport of rodeo, Harold said he’s witnessed many blessings, including his daughter’s recent selection to the Olympic Development Program with the New Mexico Youth Soccer Association.

“It’s kind of a big deal because she was going to represent New Mexico at the West Region camp in Oregon,” he said. “She was the only girl selected from the Gallup area, and the only Navajo.”

According to her dad, Justus was supposed to report to the camp in March but due to the pandemic it was canceled.

“She worked so hard for it,” he said. “They had over 100 girls across the state try out and she was one of 18 girls chosen. The camp was going to give them national and international exposure.”