KC makes the most of what they have left in soccer

The Kirtland Central High School and Navajo Preparatory School girls’ soccer teams were more identical than they may have thought. 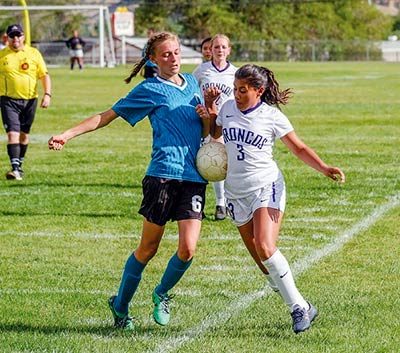 Special to the Times | Ray Landry
Navajo Prep’s Emma Mohs (left), battles for possession of the ball against Kirtland’s Jessina Garcia (3) during a game at Navajo Prep on Sept. 6.

The two teams suffered injuries to key players early in the season, so when they faced off last Thursday, the match was mostly about who could do what with what they had left to work with.
Kirtland Central proved to have a few more weapons than Navajo Prep when they defeated the Lady Eagles 5-1 at Navajo Prep.

Kirtland Central High School head coach Chad Kimball said his team proved to be able to make the most of their situation and to be able to capitalize on the small breaks they got.

“We had a really strong front end of our schedule, so we played some really tough teams,” he said. “We’re battling through some injuries and such, but I think the girls are really playing together and learning our formations, and really, I think they’re becoming a better team each and every day.”

About eight minutes into the first half, Kirtland Central sophomore Abbie Warner drew Navajo Prep goalie Naakii Brown out of the comfort of her box to score the first goal of the game from the right penalty box corner.

About four minutes later, Kirtland Central’s Hayden Alldredge dribbled her way downfield to follow up with a kick from a corner of the goalie box to extend the lead to 2-0. Alldredge followed up with a corner kick about 34 minutes into the first half, to give Kirtland Central the 3-0 lead.

With two minutes left on the clock, Navajo Prep broke the streak. Navajo Prep freshman Mya Brown had a steal and to a faithful shot to the right corner of the goal to give the Lady Eagles their first point of the game. Navajo Prep trailed Kirtland Central 3-1.

Navajo Prep head coach Stacy Irwin said his team seemed to be sitting ducks in the back field, allowing Kirtland Central to have plenty of opportunities to capitalize on their mistakes.

“On the back end we kind of just let things go a little bit,” he said. “We played up a little bit too high. We should have been where they should have had the ball in front of them.”