AIA institutes 35-second shot clock for 3A to 6A basketball 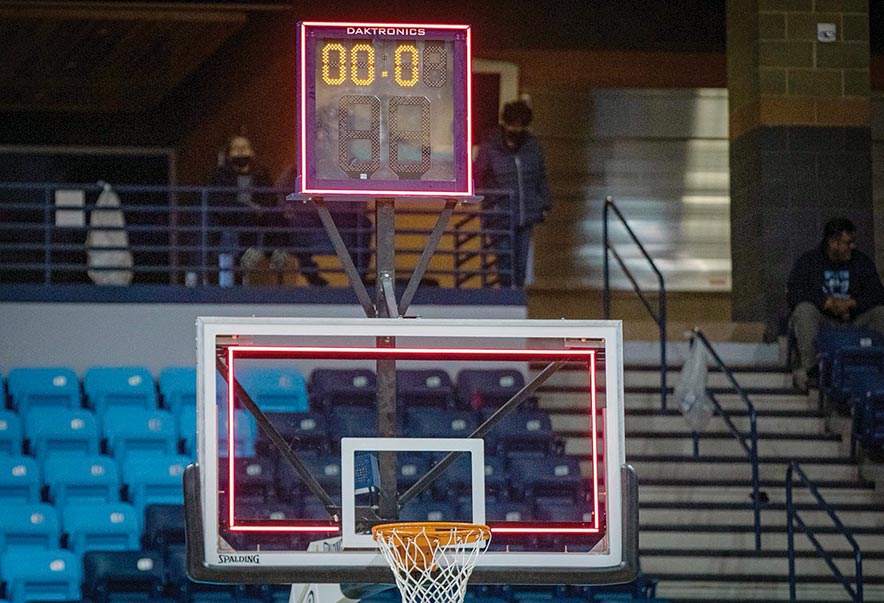 Navajo Times | Sharon Chischilly
The shot clock reaches zero in a game against the Page Sand Devils and the Window Rock Scouts. The Arizona Interscholastic Association instituted a 35-second shot clock for 3A to 6A basketball this year.

The pros of having a 35-second shot clock paid some dividends for the Winslow girls basketball team.

Earlier this year, the Arizona Interscholastic Association approved using the shot clock for the first time in basketball for the teams in the 3A to 6A conferences.

The Lady Bulldogs took advantage of the new rule as they battled back from a seven-point deficit with four minutes to go and knotted the game at 47-all with 7.9 seconds left against the Chinle Lady Wildcats last Friday night.

“Traditionally, when you get the lead, the thing to do is pull the ball out,” he said. “Teams would try to kill some clock, but with the new rule, teams can’t stall early, so on the flip side, you don’t have to foul as quick.”

With the shot clock in place, Winslow chipped away at that seven-point deficit and put pressure on the Lady Wildcats.

“With the shot clock, we went on a little run to get back into the game,” Jordan said. “We had our chances, but kudos to Chinle. They made a big play down the stretch, and they got the ball to their post, and she did what she needed to do.

“We had a defensive lapse on that final play,” he added.

Still, the advent of the shot clock will not affect how teams play from the north, Chinle coach Francine McCurtain said.

“We’ve had some discussions about it when we scrimmaged against Window Rock, and it didn’t seem to have affected us,” she said. “We all like to run and gun, and sometimes we have some trigger-happy kids who like to get one pass and shoot.”

Nonetheless, McCurtain believes the shot clock will be a game-changer in tight games such as the one on Friday night.

“I told the girls to run the clock, but we still had 45 seconds left, so we had to change our strategy,” she said.

As the season continues, McCurtain said they need to design plays in situations like that.

“I think it’s going to affect the way you play at the end of the game,” she said. “I know that Winslow had one violation, and they didn’t seem to be aware of how much time was left.

“That is something we have to get used to,” the Chinle coach said. “I don’t think it’s much of a concern until we actually experience it. We just gotta deal with it.”

In the boys contest, Chinle was whistled for one violation by not getting off a shot in time.

“I was trying to make them run the clock,” Wildcat coach Raul Mendoza said of the club. “I think we were up by 20 (points), and we just forgot about the clock, so that’s why we got the violation.”

Window Rock boys coach Gilbert Clauschee believes the shot clock will be glossed over, especially with how the rez teams like to play.

“I don’t think it’s going to make a difference,” he said. “Most teams from the rez get into their offensive sets really quick, and we get our shots off before the 35 seconds.”

“Usually, we use up about 10 seconds before we start shooting the ball,” he said. “That’s how the reservation schools play. We love to go up and down the court, so it’s not going to bother us as much.”

Like the rest of his counterparts, Nelson says the shot clock will likely influence the game’s outcome in a one-or two-possession contest.

“As the season goes along and as we sharpen our skills, it’s going to be a factor,” he said. “The teams that are ahead will want to protect their lead, but they may forget about the shot clock.”