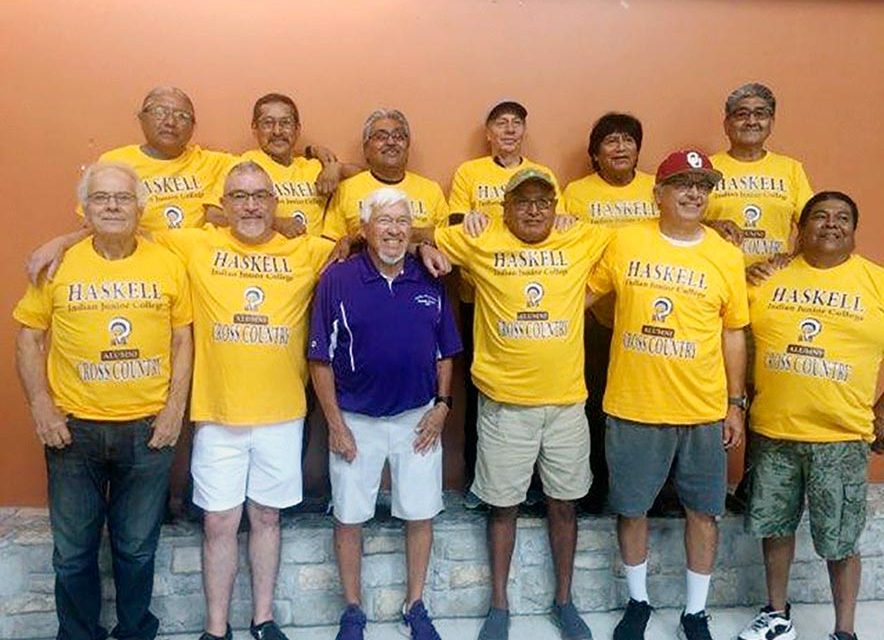 Submitted
A second reunion is being planned for runners who competed under legendary coach Gerald L. “Jerry” Tuckwin at Haskell Indian Nations University. Former athletes are encouraged to attend the reunion later this summer in Gallup on June 4.

The reunion is for the runners taught by coach Gerald L. “Jerry” Tuckwin.

For many former runners, their time running collegiate cross-country under Tuckwin’s tutelage changed their lives, and their experience stayed with them for many years.

“It was a turning point for a lot of us,” Joe said. “Like I said, we came off from different reservations. Whether it’s the Navajo Nation or other reservations, you know, small communities in Indian Country.”

Tuckwin’s sincerity and care inspired the runners, and they strived to be their best. Sometimes he would drive across the country to meet potential runners.

During a time when it was difficult for young Native men to transition to college life, Tuckwin would help them adapt and acquire their education.

“And so a lot of his former teammates did very well with their education,” Joe said. “And they’re doing well wherever they’re at, and that’s something that all relates back to coach Jerry Tuckwin.”

Tuckwin is renowned in Native sports, having been inducted into the American Indian Hall of Fame for his work in cross-country and track and field. He led the Haskell teams that would win National Junior College Athletic Association All-American recognition 30 different times and the National Junior College Marathon Championships twice, the first national championships ever won by Haskell. He’d also received the Kansas Junior College Coach of the Year Award three times and the National Runner-up award. He was also the athletic director for the university for several years.

Tuckwin, of the Prairie Band Potawatomi tribe, grew up during a time Native Americans were treated like second-class citizens.

He knew how rough growing up in a Native nation could be. After obtaining his master’s in 1970 from the University of Arizona, he began his coaching career to help his fellow Natives.

He figured sports would give them an even playing field, and their talents can’t be ignored when in competition. He also wanted to encourage his runners and give them the support that some didn’t have growing up.

“I tried to focus on anything to build their self-esteem,” Tuckwin said. “I knew they had talents, and it was up for me up to me somehow to get those talents to come to the surface of who they were, and how they saw themselves and how they felt like they did in their particular events or whatever it might have been.”

Orphaned at a young age, Tuckwin had a tough start in life, but that didn’t stop him from forging a better life. Through the kindness and encouragement of an old high school coach, he did so was very “saint-like.”

The coach told him his running could take him places, and it did, helping him get a sports scholarship. Fostering the same encouragement and beliefs he was shown, Tuckwin used the same beliefs and shared them with his kids when he became a father and a coach, and now many of his students are passing down those same teachings nearly 60 years later.

“I didn’t always have much,” Tuckwin said. “It was difficult for me, so I tried to transfer that feeling and that image from me to them because I knew that they had some of the same background feelings that I did.

“And I want them to realize that ‘Hey, I can be somebody, and I’m going to do it,’” he said. “For me, that started with the sports events.”

Although Tuckwin often raised a successful running team, he took tremendous pride in knowing that he changed the lives of the young men he coached for the better.

He coached for nearly 30 years, training athletes in cross-country, track and field, golf, and assisted during football training.

Joe and Nells were students when the university was known as Haskell Indian Junior College. They both finished their two years before enlisting in the military. After serving, they returned home and earned degrees before beginning their respective careers.

Joe received a master’s degree and then helped create clubs for kids and veterans organizations in Gallup and the San Juan County. He was briefly a probation officer for troubled youth before becoming a cross-country coach at Rehoboth Christian School. He is currently working for Molina Healthcare of New Mexico.

Originally from the Navajo Nation, Nells is ‘Áshįįhí and is born for Bit’ahnii. He settled in Oklahoma and currently teaches at Riverside Indian School, which recently turned 150 years old.

Nells remembers Tuckwin’s teachings, even after leaving Haskell. He finished his education at Central State University and then enlisted afterward.

During the First Gulf War, he served as one of a few Native officers in the special forces. After eight years, he returned to Oklahoma, where he’s been a teacher and a cross-country coach for over 20 years now, teaching many students from the nearby reservations. Some of his students are going on to run in international races.

Nells thought of the reunion after hearing a former classmate had recently passed away. Remembering his old running friends and coach, he figured it would do everyone good to come together, remember their time together, and catch up with one another.

“Not only his teaching but his lifestyle,” Nells said. “He went and showed us a way of life a better way of life.

“Him coming from an orphanage in a sense, and he said, ‘Hey, if I can do it, you can do it,’” Nells said. “We are passing what we have learned from Mr. Tuckwin on to our students, and, you know, we all come from different backgrounds, dysfunctional families, and stuff like that.

“(I) didn’t have the greatest upbringing, but I was the first in my family to go to college and get an education, and it’s been pretty good,” he added.

They held the reunion in Oklahoma, where about 40 former runners came together.

“I was afraid that we might lose some of our runners; we already lost some in the past due to different reasons,” Nells said.

This year, Joe will be organizing the reunion, with help from Nells, in Gallup on June 4. They’re expecting a large turnout as many of Tuckwin’s former students are from tribes in the southwest.

Tuckwin had fun at the reunion the previous year and is looking forward to this one, saying it’ll be like a family get-together.

“For me, it’s just a real honor, and I’m just so happy to see these young people and see how they’re doing in life and like to feel like I had just a little part of it,” Tuckwin said.