Don’t count out Page just yet 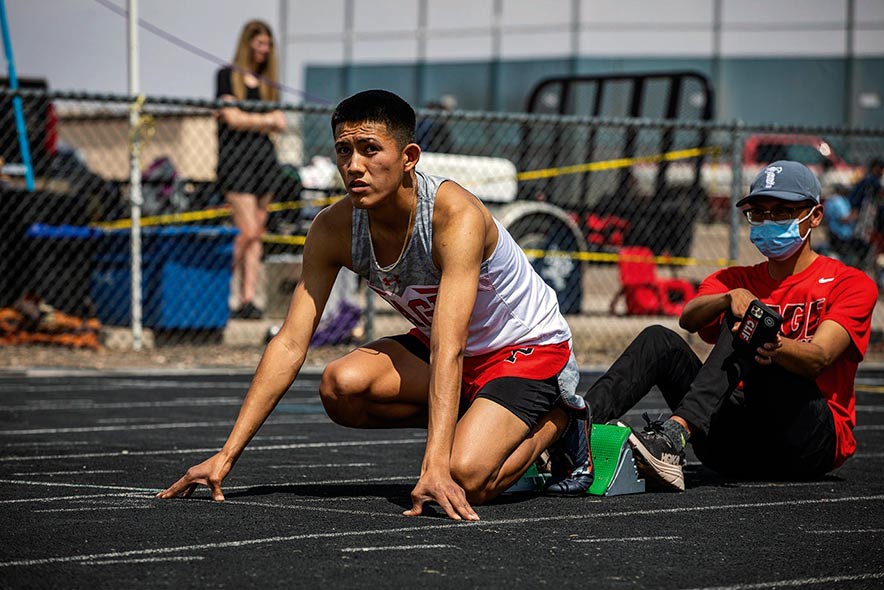 Navajo Times | Sharon Chischilly
Page's Trent Holiday preps for his race in the 400-meter dash during the Joseph City invitational on Apr. 2. Holiday competes in multiple events, including the 4x800 relay. Page has won the previous two state titles in that event.

The past 4×800 Division III state titles went through Page.

The Sand Devils are reluctant to give that up even though they return only one runner from the last state championship team two years ago.

First-year track coach Brandon Dugi said the current 4×800 team is looking a lot different from previous years but he’s not counting them out. The team consists of sophomore Shayden Begay, junior Cody Slim, and seniors Trent Holiday and Rex Martin.

“This is a new season with a new team but I’m happy with where they’re at right now,” Dugi said. “They’re doing a good job and we’re just looking to get them tuned up for our next meet in Chandler (this) week.”

So far this season, the 4×800 Sand Devil team remains unbeaten, having captured meet titles at the Friday Night Lights Invite at Horizon High School in Scottsdale on March 26 and the recent Joseph City Invite last Friday.

“I think we did pretty good, we held our own,” said Holiday, the team’s only returner. “I just told my boys to keep your head up no matter what happens because we were missing our third runner today.”

With an alternate, the Sand Devils bettered their time by four seconds as they were timed in at 8:44.47 at the Joseph City meet. Nevertheless, Holiday said they still need a lot of work.

“Time-wise I’m not too happy about it,” he said. “Sometimes that’s how life works and you just have to deal with it. At least we’re not running anywhere in the nines.”

With the Page team winning back-to-back titles in the aforementioned relay team, Begay said he’s starting to feel some of that pressure to repeat as champion.

“It’s kind of like overwhelming,” he said. “I feel like we have some big shoes to fill but our goal this year is to finish out strong.”

And while he would like to add to the Sand Devil lore, Martin said it’s too early to tell how they’ll do this season as Page has recorded the third fast mark this season in Division III.

“I think we can still work our times down,” he said. “We just have to wait and see on how far we’ve come at state.”

As for their efforts last Friday, Martin they had an “off day” as the Sand Devils had very little preparations leading up to the 4×800 race.

“They started the race really early without warning us,” he said. “I wasn’t ready but I guess I did OK, based on how prepared we were.”

In addition to their relay race, Holiday said they have other aspirations. The four runners compete in other running events in hopes of capturing gold in their respective events.

“I’m going to try my best and this year I want to try and win four state medals,” the Minot State University-bound runner said.

And although he had other offers, Holiday said the Division II school in North Dakota was a good fit for him.

As for his individual events, Martin is looking to contend for a state title in the 3200.

“I want to try and win state for the two-mile,” he said. “I ran a pretty good race last week, and I think I can still go faster. If I can keep working my time down I think I’d be a good contender for that event.”

And although he had a top finish, Martin said his time at the Friday Night Lights Invite was unofficial since he ran unattached.

“I’m pretty fast in that event,” he said.