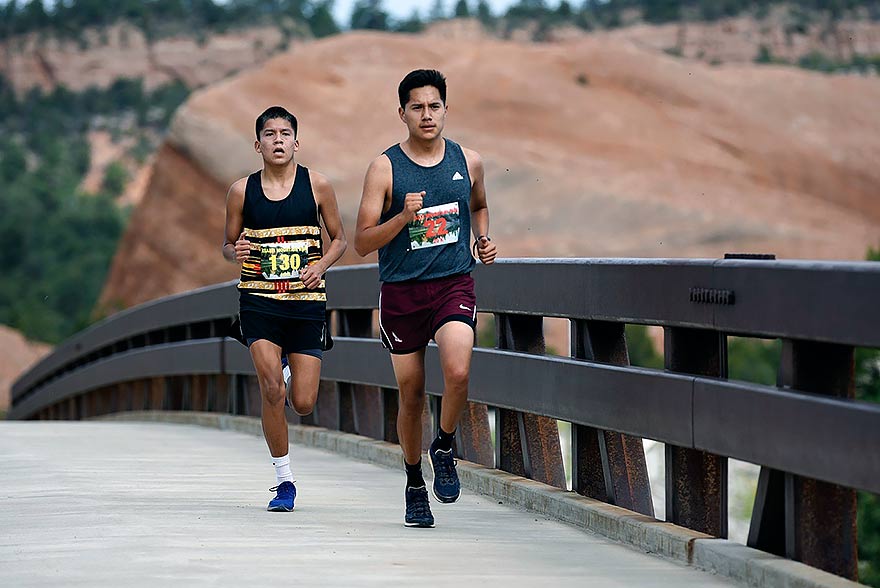 Navajo Times | Ravonelle Yazzie
Riley Watson, left, and Steven Nez run side by side at this year’s Asaayi Mountain Run on Saturday. Watson (10K) and Nez (20K) placed first in their respective races.

It took a few loops around Lake Asaayi and climbing many hills on Asaayi Run trail for Steven Nez to learn that he can go the distance.

Nez said it was his first 20K race and the longest race he’s ever endured.

“I just had fun,” he said. “It was my first time racing that far, a 20K, so I just wanted to have fun. I didn’t specifically expect anything.”

Nez said he is typically a road racer and decide to give Asaayi Run a try this year.

He said the distance and the location intrigued him.

“What was appealing about it was the running in the mountain, it was more of a field race instead of a road race,” Nez said.

Nez said he had no expectations going into the race.

The moment he stepped on the course, he said, he knew it was going to be more challenging than he thought.

“When I got on the course it was pretty hard. It was very challenging,” he said. “It was a very hilly course and sandy. It didn’t let up on any parts except for when you go down hill.

Nez said the course reminded him of the race at Narbona Pass, which has similar terrain.

He said despite the challenge, he continued to focus on his running and training as he came out on top.

Nez said it was an eye-opening experience for a runner like himself, who’s working his way up to longer races.

“That really just opens up doors about me running farther, distance wise,” he said. “It got me thinking I can do half marathons, which is exciting.”

Nez said he had an overall positive experience. He vowed to return to race for years to come.

“I think I’ll be there year after year,” he said. “The race director and the people, volunteers, were all great people. They were welcoming, which I liked.”

The cross-country and three-event, track and field state champion said she used the race to get the fundamentals of her running down before the start of her final cross country season.

Upshaw, 16, got a late start in the race because she showed up late, but managed to pull a first-place win.

“It shows a lot, it shows me that I’m in better shape than I was last year,” she said. “It give me a lot more confidence going into the cross country season.”