‘My art has kept me going all these years’: Ceremonial poster artist Richard Kee Yazzie a model of strength, resiliency 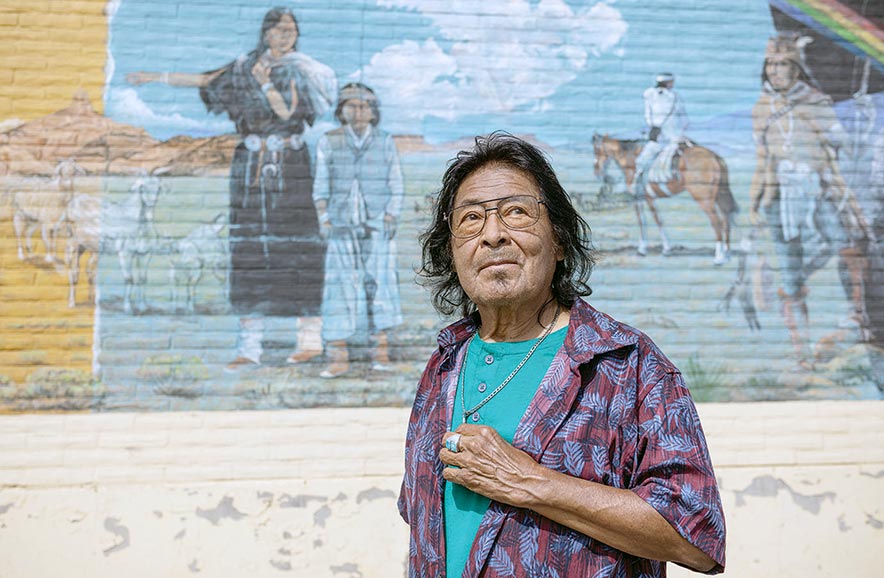 Navajo Times | Sharon Chischilly
Richard Kee Yazzie stands next to his mural called "Return from the Long Walk." His own great-great-grandfather, Casa Mira Hasteen Tsiniginni, who is a boy depicted in the mural (left), was only 10 years old during the Long Walk and later became a medicine man after returning home. 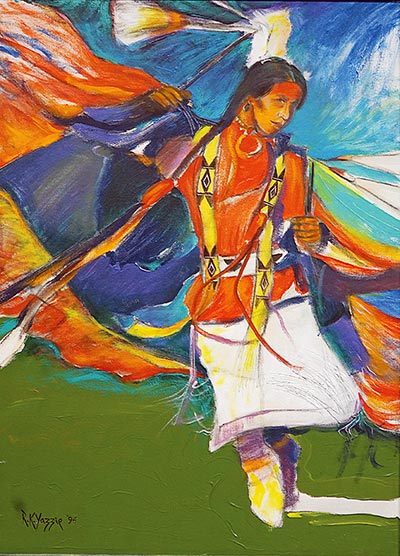 A painter, muralist, illustrator and graphic designer, Yazzie’s education and career achievements were hard earned through periods of fear and uncertainty.

In that regard, Yazzie, who is also a Vietnam veteran from Crownpoint, is a model for Diné strength and resiliency.

He says his passion for art has been the one constant in his life that has brought him joy and healing.

“My art has kept going all these years and helped me survive through these hardships,” he said.

Yazzie said he is honored his painting “Shawl Dance” will appear on this year’s Centennial T-shirts and posters, commemorating the 100th anniversary of the Gallup Inter-tribal Ceremonial.

“I try to incorporate these various themes into my artwork,” he said. “Such events as Ceremonial, the local rodeos and Native celebrations, the importance of the trading posts, Native art forms, respect for our veterans, and all of the ethnic groups that make up the Gallup population, are things I try to represent in my artwork.”

The spry 76-year-old, who doesn’t look a day over 50, says he hopes the poster award brings more awareness to his artwork.

Yazzie grew up in a traditional home on a mesa by Mariano Lake where his family grew crops, including squash and corn.

His mother, Christine Yazzie, was a weaver and his father, Logan Yazzie, was a World War II veteran and worked for the Santa Fe Railroad, which meant he was away from home most of the time.

Navajo was Yazzie’s first language, which made it very challenging for him when he entered Crownpoint Boarding School at only six years old.

When he got to the school his hair was cut, he was given a uniform and was assigned to a dormitory.

“Everything was new,” said Yazzie. “The school was like the military. You had to do whatever they wanted you to do. It was strict.”

Yazzie said under the authority of the nun/house mother, several older Native boys were in charge of taking care of the children – but they also posed a threat.

“They watched us,” he said. “So many things happened.”

Yazzie said if students didn’t go by the rules they were punished, which often included physical and mental abuse.

They were also punished for speaking their Navajo language, he said.

But Yazzie had a hard time learning English, made even more difficult because he needed eyeglasses and couldn’t see the chalkboard.

“We were nervous in the classroom,” he said. “We were scared all the time. I got so far behind.

“It really affected me in many different ways,” he said. “They said if we didn’t learn fast enough, they would set you back to remedial learning.”

In fourth grade, he was transferred to Fort Wingate Boarding School near Gallup.

“It was the same,” he said. “We lived in this old army barracks. It was more like army style.”

When Yazzie and his brother ran away from the school and the Navajo Police picked them up, his mother intervened and took them to a public school in Holbrook, Arizona, where there were students from different backgrounds.

“We lived in a dormitory again, but it wasn’t any better,” he said.

In eighth grade, Yazzie was transferred to the Santa Fe Indian School, which was an improvement.

“These dormitories were more like adobe-type buildings,” he said. “You got your own room.”

SFIS also offered art classes and workshops, which he delved into.

In 10th grade, Yazzie was sent to the Albuquerque Indian School where he stayed through 12th grade.

“It was still a boarding school with restrictions,” he said. “I started doing some painting and some silk-screening and did some posters for the University of New Mexico.”

After he graduated from high school, Yazzie chose to study at the San Francisco Art Institute.

“That was the first time I went to a big city,” said Yazzie. “We didn’t know what to do. There were all these tall buildings and people driving so fast.”

After two years in San Francisco, Yazzie returned to Santa Fe after being accepted into the Institute of American Indian Arts where he enrolled in 1965.

In addition to studying academics, he expanded his art skills to include sculpture, graphic design, pottery, metal-working, woodwork and silversmithing.

“I did just about everything,” he said. “We had very professional art teachers.”

He was also exposed to other Native art students, many of whom ended up becoming famous, such as painters R.C. Gorman and Fritz Scholder and sculptor Allan Hauser.

After he graduated from IAIA, Yazzie considered enrolling in post-graduate classes and was offered a scholarship to an art school in London, but those plans were abruptly aborted.

Yazzie was enlisted in the U.S. Army and was assigned to the front lines during the Vietnam War as part of the 1st Cavalry Division (Airmobile).

“Every day there was a fire fight,” he said. “I stayed out there a whole year.”

Yazzie said he did his best to survive and took comfort in knowing his traditional grandmother, Nellie Shorty, was praying for his safety.

It was then that a pivotal moment in his life occurred when his company was told there was a large group of Vietnamese fighters by the Cambodian border.

“Sure enough, we got ready and they sent us out in choppers,” he said. “We landed there and we tried to explore that area. I was a point man – you go and lead your squad 100 yards ahead.”

He said they came into an open area where all the trees were cut down.

“That’s where they were building bunkers that were covered with dirt and sandbags,” he said. “Something told me to turn around.”

That’s when the Vietnamese soldiers opened fire and over 100 U.S. soldiers were killed in an ambush.

“Each one of those guys was shot through the heart or head,” he said. “There was blood everywhere.”

Yazzie said a bullet swooshed by him so fast that he thought it went through his body, but it didn’t.

“I never got scratched or anything,” he said. “At that time, before we got ambushed, I was right in the open. I think an angel was with me.”

As it got dark, Yazzie hid with two wounded soldiers behind a tree.

“I crawled over there and I calmed them down,” he said.

Yazzie bandaged up some of the wounded and carried two injured soldiers out of the ambush area on his back.

“I was so tired,” he said. “I pulled them out and by late evening everything was settled down. I guess the enemy moved out but probably not too far.”

Yazzie credits his grandmother for saving his life.

“That day I survived,” he said. “I guess my grandma sent all the prayers for me and I came home safely.”

However, with his life spared, when Yazzie came home from Vietnam, he was overcome with health problems and symptoms of post-traumatic stress disorder, which would persist throughout his life.

He developed cancer and diabetes from being exposed from Agent Orange as well as chronic back problems.

Like many Vietnam veterans, Yazzie did not receive a warm welcome back in the U.S.

“They were saying we were baby killers,” he said. “They were prejudiced against us after we came back from the war.”

After an operation in Madison, Wisconsin, Yazzie stayed and worked at an “Indian village”/trading post as an artist, joined the Madison Art Guild, and got involved with the local American Indian groups and the powwow circuit.

Then he was hired to work for the Wisconsin Department of Transportation in Madison as a full-time graphic designer where he served nine state departments doing all kinds of design and illustration work, from logos to signage, billboards, brochures, maps and booklets.

In his 32 years with the department, Yazzie learned new skills and earned many distinctions, including for large murals depicting the history of transportation, and the design of the 150th anniversary Wisconsin license plate, which featured a historical Native American-themed landscape.

Yazzie also experienced his share of discrimination in the workplace as a talented Native American artist, which caused him a great deal of stress, he said.

When Yazzie retired, he decided it was time to return to Navajo.

After living in a trailer in Crownpoint without water and electricity for a couple of years, he spent his life’s savings on a home in Jamestown that would make it easier for him to address his ongoing health problems.

He also sought the guidance of medicine men and women to try to address the long-standing PTSD, which helped him a lot, he said.

In 2005, he was commissioned to do a large-scale mural in Gallup called “Return from the Long Walk,” which is 15 feet high and about 80 feet long near the intersection of Third and Hill streets.

His own great-great-grandfather, Casa Mira Hasteen Tsiniginni, who is a boy depicted in the mural, was only 10 years old during the Long Walk and later became a medicine man after returning home.

“I wanted to capture the tragedy that happened long ago,” said Yazzie. “It’s something that the Navajos endured!”

Yazzie believes it’s important to illustrate the history of the many groups that have come together in Gallup that influence the present-day culture and lifestyle of the city.

To this day, in addition to his fine art painting and commissions, Yazzie continues to do freelance graphic design and illustration, including signage and murals for businesses, municipalities and events like rodeos.

“I’ve been keeping myself busy,” he said.

Yazzie will be at the Ceremonial fine art exhibit at Red Rock Park doing live painting demonstrations and signing posters from Aug. 10 to 14.

“I’m excited to go out there and meet people,” he said.