In her college track and field debut, Kiara Quezada-Arzate reached a career height in the pole vault.

The Farmington High School graduate went on to finish the University of New Mexico outdoor season second-best among the Mountain West Conference women vaulters who were true freshmen. 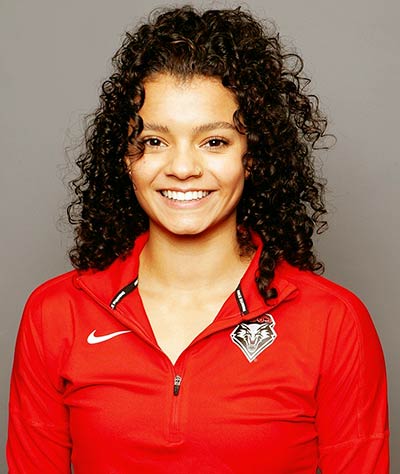 She accomplished that while overhauling her technique.

“The sky’s the limit for her,” New Mexico track and field head coach Joe Franklin said.

Quezada-Arzate participated in nine meets and adapted well to the challenges of a first season.

“The adjustment phase for university is huge,” Franklin said, but because of the pandemic, the athletes were not able to do anything during the fall, making this season even more challenging.

Still, she opened by clearing 12 feet, 1.5 inches. “Any first-year student who has a lifetime best,” he said, “that’s remarkable.”

Her technique in achieving that mark wasn’t correct, though, so she spent the whole season gradually making improvements.

“We had to change my entire jump,” said Quezada-Arzate, who failed to record a height in only one meet. “I’m very happy with my overall progress. I have to trust the process.”

She changed her approach by adding steps taken to the cross bar, in order to boost her speed into the vault. “Her speed is what makes her potential in the vault exceptional,” the coach said.

To generate more push on the pole, she practiced keeping her arms as high as possible when holding the pole and keeping the top arm straight.

She worked on positioning her left leg for the swing. “I curled it in high school,” she said. “I was working on keeping it straight.”

Then she worked to pike over the bar, rather than clear it on her side or back as she said she did during high school.

And she made those changes while using new poles. “We’re getting her used to jumping on bigger poles,” Franklin said. “We have a sizable inventory of poles. In high school poles are so expensive, kids don’t have a lot of options.”

Quezada-Arzate remained dedicated to the process, and her performances reflected improvement. “The frustration comes if you’re not jumping as high as in the past,” Franklin said. “She’s just getting used to everything.”

Among her better efforts, she scored for the team by placing second at a West Texas A&M meet and third at two separate Las Vegas meets. At the conference championship, she placed ninth, one position shy of scoring.

She also was a part of the 4-by-100-meter relay that did not finish at the conference championship. She will be in additional events in the future, for Franklin wants to make the most of her speed.

During the summer she plans to focus on lifting weights and sprinting instead of vault repetitions. “It’s more of a mental break,” she said. “The mental break is very important.”