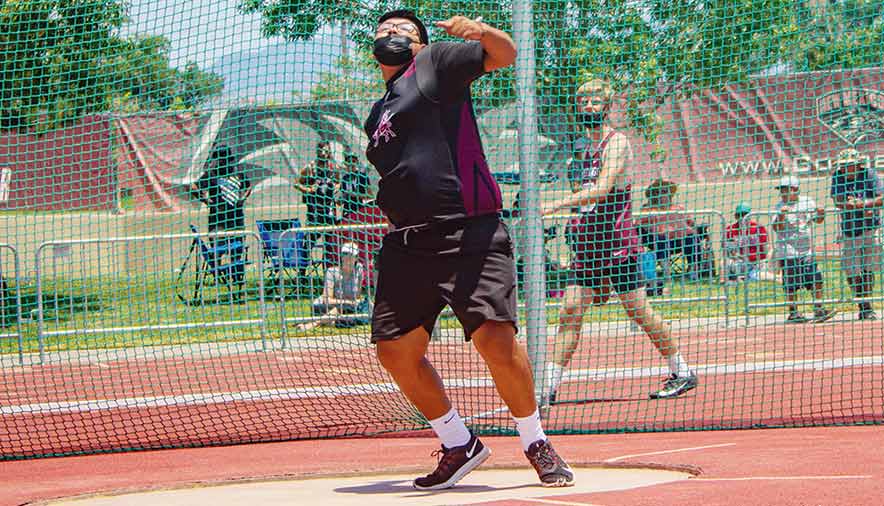 Navajo Times | Cyrus Norcross
Magdalene Steers Joaquin Billy throws the discus during the state meet on June 17 in Albuquerque. Billy went on to place third in the discus and in the shot put he won the state title with a throw of 43 feet, 6.50 inches.

The Magdalena boys track team went toe-to-toe with Logan High for the Class 1A team championship.

The Steers edged Logan by a mere two points as both teams showed why they were considered the top two teams in the small school division.

Magdalena finished the one-day meet with 69 points while Logan tallied 67 points in this epic championship.

Billy tallied 11 of those team points by placing in two events. He captured the 1A shot-put state title with a throw of 43 feet, 6.50 inches.

“I threw it 43 feet, which is pretty cool,” Billy said. “I really don’t like the shot put but today was my day.”

The Magdalena junior beat his previous best by over 3 feet as he entered the state meet as the third seed.

In the prelims, Billy’s best throw reached 40-02.50 and going into his final throw he trailed Lake Arthur’s Adrian Guillen and Clovis Christian senior Kane Duong in the standings.

Winning the state title, Billy said, was bittersweet since he didn’t get a chance to compete at the state meet the previous two years.

In his freshman season he broke his ankle at the first day of baseball practice and last year the track season was canceled due to the pandemic.

“I was sliding into second base and broke it,” he said. “Man, that really sucked.”

In the discus, Billy earned another medal by taking third with a throw of 107-11.

“It’s not really what I had hoped for,” he said as he came up 14 feet shy of his previous best. “Today wasn’t my day and I think it was the wind. I just would throw it and it would just tilt over.”

With his first state gold medal, Billy said he’s pretty excited about next season as he hopes to win two state titles in his senior year.

“Everyone is going to be chasing me now,” he said, while adding that he is hoping to reach 140 feet in the discus and over 45 feet in the shot put.

And while Billy was expected to place, his teammate Javon Silversmith surprised the field with a sixth-place finish with a new personal best of 90-10.

“I really didn’t expect this,” said Silversmith, who met the state qualification mark a week before the state meet during the district meet.

Like his teammate, Silversmith said he would like to see improvements with his throws in his senior year next season.