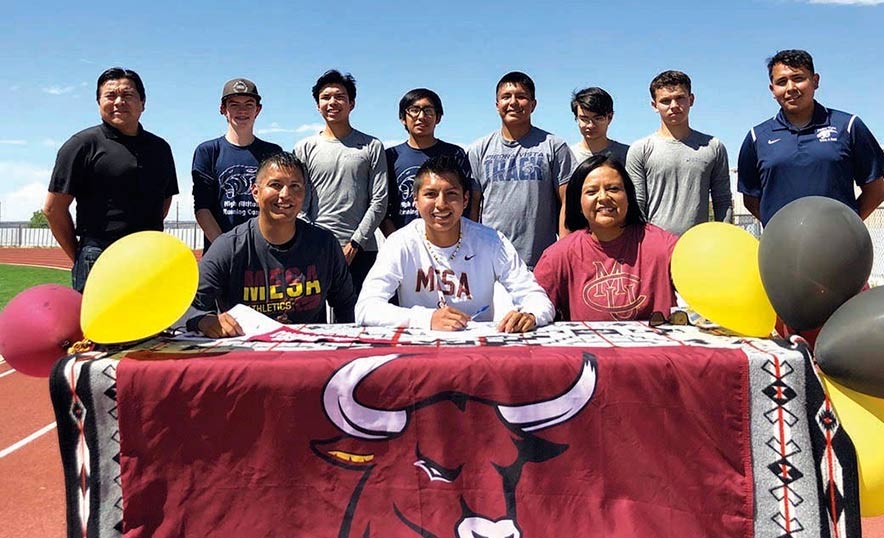 Submitted
Piedra Vista’s Triston Charles (center) signs his letter of intent to run for the Colorado Mesa University men’s cross-country and track team. He is pictured here with his parents OJ Charles (left) and Bernadine Beyale (right) and members of the PV cross-country team.

Triston Charles has always been fast.

Growing up he exhibited his blazing speed on the soccer pitch. It wasn’t until his junior season at Piedra Vista High that he realized his legs might be able to take him places.

“It’s been surprising for me,” Charles said of his rapid climb in the cross-country ranks, which includes a state championship last year.

“I didn’t expect to do what I did but at the same time it helped motivate me,” he said. “It motivates me to work even harder to get these opportunities to run somewhere and pursue an education.”

The recent PV grad received several offers and of the potential suitors Charles chose to run for the Colorado Mesa University men’s cross-country and track team.

“I really liked the facility,” Charles said of the Grand Junction, Colorado school. “They have some brand new stuff, and training-wise the terrain is very familiar to what it’s like in Farmington.”

In addition to Colorado Mesa, Charles was considering offers from Fort Lewis College in nearby Durango and Western New Mexico University in Silver City.

He whittled his list down to Western and Colorado Mesa and after some lengthy conversations with his parents the latter prevailed.

“We knew he wanted to be a little bit closer to home,” his dad, OJ Charles said. “Western University is about eight hours from where we live and Grand Junction is about half of that.”

Of the two campuses, OJ said his son was real impressed with the athletic facilities that Colorado Mesa had to offer.

And while that played a factor in his decision, his mom, Bernadine Beyale, offered a different angle on why her son chose Colorado Mesa.

“It came down to academics,” Beyale said, while adding that Triston was torn between criminal justice and engineering.

“He had to look into that and we told him to make sure they have criminal justice and engineering on their list, that way he’s not losing out on the academic side of it,” she said. “Those are the things he had to consider.”

Admittedly, Beyale said she’s a bit nervous with her son going off to college.

“When I went away for college I had never really traveled anywhere,” she said. “I’m scared and nervous for him but in his last two years of cross-country he went to Florida and San Diego.

“Those types of experiences have helped to where he got to meet other runners and be with other coaches and not have us in the picture,” she said. “I’m grateful that he got to experience that.”

Triston said he’s leaning towards a criminal justice degree. With that degree he’s hoping to either become a police officer or a detective.

In a strange twist of fate, Triston’s rise in cross-country has a similar theme to the way he chose his major – coming out of nowhere.

“It was a big surprise because he always played soccer,” Beyale said.

But at the urging of his high school soccer coach, Triston tried out for the cross-country team his junior season.

“His coach told us that Triston can run, run and run,” she said. “That is where it started from there.”

Like his wife, OJ said he was also surprised.

“He’s been a soccer player all of his life but he just has a tenacity to run,” he said. “He has a lot of energy so he did both sports and it took off from there.

“We had no idea,” he added. “This has been an amazing run these last two years. We’re very proud. Shoot, he’s the first in my family to earn an athletic scholarship at a Division II level. We’re just real proud.”

With Triston putting a lot of effort into his soccer game early on, Beyale said she thought that her son would earn a scholarship in that sport.

“I always thought it would be in soccer,” she said. “Never did I think that we would be watching him sign his letter of intent to run cross-country and track.”

Academically, Triston got accepted to a number of colleges as he finished eighth in his graduating class of 350-plus students with a 4.1 GPA while at PV High.

“Triston has always been into academics since he was little,” Beyale said. “With him keeping up with his grades he did earn some academic scholarships as well. If running wasn’t in the picture he was going to Arizona State. That was his top choice.”

Of the academic scholarships he’s earned, Beyale said her son procured one in an essay contest where he wrote about sportsmanship.

“He wrote about what happened to him at state in cross-country,” she said of the bizarre occurrence when Triston was given the second-place medal after he appeared to finish first in a tight race with Clovis then-junior Jerrick Maldonado at the Class 5A state meet due to a chip malfunction.

Instead of celebrating his triumph on that day, the PV runner had to wait a few days before he was declared the winner after Maldonado forfeited his first-place medal after reviewing video of that close finish.

“It took a lot for him to own up to that,” Triston said of the Clovis runner, who showed true sportsmanship.

With a state title in tow, Triston said he was looking forward to the spring sports season but the COVID-19 pandemic canceled all sports across the country.

“I was wanting to better my times and maybe go for another state championship,” he said. “It was really hard to miss that but even with all the things happening with the virus I’m relieved that I was able to sign. I’m glad that all the work that I put in these last couple of years has paid off.”