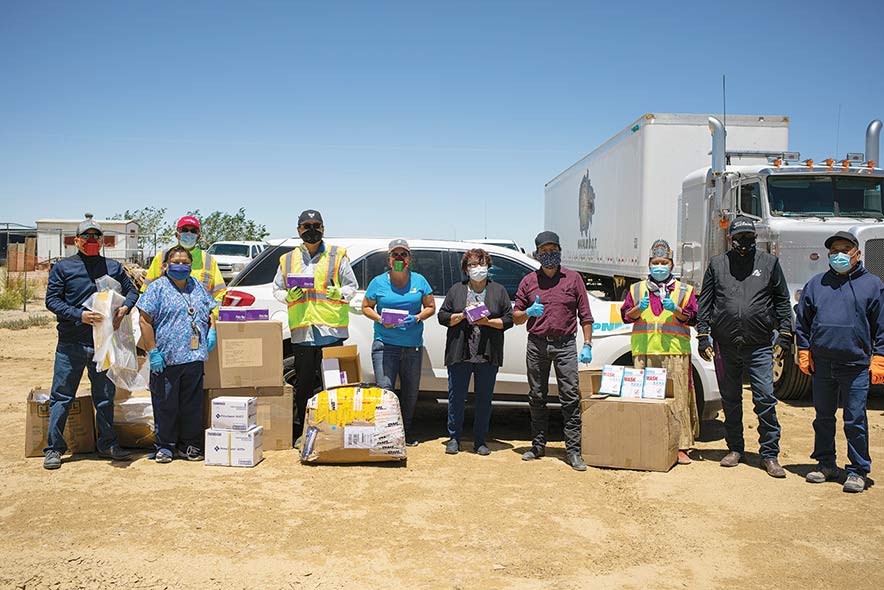 Navajo Times | Sharon Chischilly
Navajo Nation President Jonathan Nez and his crew pose with donated items during a recent food distribution. Some Shiprock residents are saying their chapter has been short-changed when it comes to COVID-19 relief deliveries.

What began as an inquiry from Shiprock constituents about when they might receive care packages from the president’s office opened up a can of worms with regard to the management of the chapter itself.

A breakdown in communications has left Shiprock’s elected president, Chili Yazzie, Delegate Eugenia Charles-Newton and many residents in the dark about how donations are being received and distributed at the chapter. “There has been no communication coming from the chapter administration regarding donations,” said Charles-Newton.

“When the chapters were shut down, a decision made by the executive branch, chapter officials were removed from efforts to assist their community. I did push for more communication from our chapter but have received no reply.”

Charles-Newton said she and Yazzie were eventually told by the Division of Community Development that “chapter managers/coordinators are in charge.” As a result of the chapter closure, connection to the community was also shut down and chapter officials are shut out, she said. “The people go to their respective chapter for assistance, for help, but the actions of the Division of Community Development have prevented that from happening,” she said.

Charles-Newton added that the spending of chapter emergency funds needs to be approved through a chapter meeting, but there haven’t been any meetings since early March, and neither she nor Yazzie has been informed about how much money has been spent and for what purpose.

“As far as I know, the chapter has not approved use of those funds,” said Charles-Newton.

Community resident Reddawn George said that since the pandemic started she hasn’t heard anything from Shiprock Chapter regarding community donations and no one answers the phone. George said she’s gone “all the way up the chain of command” to try to get answers. She asked DCD Director Pearl Yellowman if the chapter’s emergency funds were being spent.

George said Yellowman told her that spending the funds would require a plan and “some chapters are not wanting to work with us.” Chris Bahe, assistant to President Jonathan Nez, suggested to George that Shiprock is too big to serve, she said. “It started to feel like we were just being pushed aside,” said George.

Jared Touchin, communications director for the president’s office, has been out in the field hosting live broadcasts on Facebook of the distribution of donations at chapters. “In regards to Shiprock, we are trying to reach smaller remote communities before turning our attention to bigger communities like Shiprock, Tuba City, Crownpoint, Fort Defiance, and Chinle,” said Touchin. “Keep in mind that each of these communities has a grocery store and other sources of food. Hopefully, we will have enough donations, manpower, and other resources to reach these communities soon.”

Charles-Newton pointed out that over 8,000 Shiprock residents voted for President Jonathan Nez, including herself. “To date, I have not received any information on whether Shiprock has been served,” said Charles-Newton. “I have not seen a calendar from OPVP yet.”

“We need transparency here,” said Tutt. He questions the OPVP prioritizing rural communities and suggests that smacks of discrimination toward the larger chapters. With all of the donations coming in to the Nation from all over the world, he said, Shiprock should receive something. “We need help in Shiprock,” said Tutt. “My question to Jonathan Nez — is the president going to come do a food distribution?”

In a statement, President Chili Yazzie affirmed that with Shiprock Chapter closed to the public and chapter staff deemed non-essential, there is no unified plan and no accountability for Shiprock’s COVID-19 response. Yazzie confirmed that as of early April there was over $100,000 in emergency funds at the chapter. Due to the lack of response by Shiprock Community Services Coordinator Michelle Peterson, Yazzie had proposed Shiprock Chapter issue a declaration of emergency early on to coordinate and streamline its COVID-19 response, resources and communications.

“Ms. Peterson responded saying such a declaration was unnecessary,” said Yazzie. Taking matters into their own hands Yazzie and Charles-Newton formed the Northern Dine COVID-19 Relief Effort grassroots entity to help provide essentials, including food and water, to those in need, in coordination with other organizations such as Bethel Christian Reformed Church.

“We came together when the chapter was closed,” said Charles-Newton. “We felt we could not stand back and wait, so we jumped into action, connected with people we knew, and brought in donations.”

Yazzie said Peterson failed to respond to a request from Northern Diné Relief for a list of people who need help and an accounting of what donations had come in to the chapter and whom they had been distributed to. “This was necessary to prevent duplication and assure than no one falls through the cracks,” said Yazzie.

Peterson also declined to participate in the planning calls, he said. “NDCRE partners have no idea what the chapter is doing,” said Yazzie. “In these dangerous times when our people are in peril, it is an absolute for there to be communication and coordination.

Unfortunately the Shiprock Chapter administration obviously does not concur,” he said. Yazzie also questions the Division of Community Development’s rationale in recalling Peterson from her mandatory administrative leave.

“It is an absolute danger to have someone who pretends to know the people be in this authoritative capacity of the Shiprock Chapter with its resources, just because the policy says she is the designated primary contact,” said Yazzie. “As for me, I am relegated to sit on the sideline and be quiet by Ms. Peterson and the DCD.”

Yazzie wrote a letter to heads of the executive branch, including Nez, on April 13 asking for clarification of a delivery to Shiprock that was offered through the Health Command Operation Center, but didn’t receive a response. “We were told to be on standby. We never got orders to mobilize. We remain on standby,” he said. “It is apparent that the HCOC is extremely overtasked and is struggling to meet overwhelming needs of our people.”

Yazzie believes the command center chose to work with Michelle Peterson as the designated point of contact.

“She was put on administrative leave the first of March and placed under investigation for allegations that include misuse of chapter funds,” he said. “Her DCD bosses brought her back, presumably to help with the COVID-10 response efforts.”

Yazzie requested that DCD designate him as the official point of contact for the chapter instead, but that hasn’t happened. “I vehemently object that the DCD permits the CSC to be in this authoritative capacity further jeopardizing the health and lives of our people with her nonchalant inaction and obvious incompetence,” said Yazzie. “She needs to be placed back on her administrative leave and the investigation on her alleged infractions of tribal law and policy must be completed.”

In reaching out to Peterson for her side of the story, Peterson told this reporter she would not go on record, deferring to her “PIO and supervisor.” “I’m not comfortable being quoted in the paper,” said Peterson.

No one is answering the phone at DCD and an email inquiry to Yellowman and Peterson’s supervisors Sonlatsa Jim-Martin and Eliza-Beth Washburn for clarifications was not responded to by press time.

Shiprock Chapter Vice President Nevina Kinlahcheeny could not confirm if Peterson is still under investigation after having been called back to CSC duty at the chapter. “I’ll have to get back with you, so no comment,” said Kinlahcheeny.

Shiprock Chapter Secretary Treasurer Kaibah Begay said “the chapter is in charge” and “Yazzie is doing his own thing.”

“All chapters are closed,” said Begay. “They are doing food distributions internally.” She explained that Peterson and the accounts maintenance specialist, who are working behind closed doors in the chapter house, have been coordinating with the Command Center, Community Health Representatives and Northern Navajo Medical Center to get supplies out to elderly, high-risk, quarantined or COVID-19 positive individuals.

Peterson is also working with Bethel Christian Reformed Church and Echo Food Bank to serve community members and distributions are happening at the church, said Begay. She explained that nobody answers the phone at the chapter because the employees are busy receiving donations and “boxing up stuff.” She said all 110 chapters are facing the same issues occurring at Shiprock due to the chapter closures by DCD.

“There’s only two permanent employees at the chapter level and they can only do so much,” said Begay. “They can’t be sitting there answering the phones.” Begay said community members can email the chapter or message it on Facebook.

Harland Cleveland, emergency management director, who now heads up humanitarian donations for the Navajo Nation, confirmed that a large distribution of essentials was delivered to Shiprock Chapter by National Guardsmen in late May. Cleveland said he is working with Peterson to assess current needs for additional relief aid at Shiprock. “There’s nothing secretive,” said Begay. “We’re serving the people on this end.”

Begay said Yazzie and Charles-Newton are aware of all of this and stated that it is false that there has been no communication from the chapter. “They’re the ones not wanting to communicate with the chapter administration,” said Begay. “Everything is twisted and that’s not right.”