Tara Seaton is excited to be back and she’s looking to push it one step further with a world title in Las Vegas later this year.

The Queen Creek, Arizona barrel racer finished as the reserve champion at last year’s Indian National Finals Rodeo with her prized horse Gypsy, a mare she purchased from Kylie Gilbert the year before.

“We’re definitely a lot more hungrier,” she said. “We didn’t have the best run in the first round at the INFR but after that we pulled it together and made some exponential improvements. 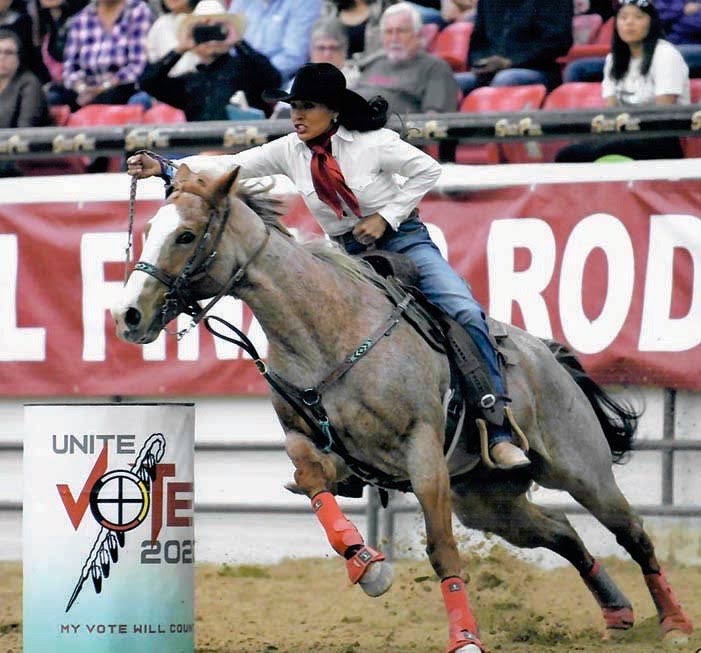 “We put an exclamation point on that last run by winning the round,” she said. “So this year we’re definitely going to go in hungry and we’re going to make sure we come back with that title.”

“Of course, the end goal for this year is winning the 2020 INFR world title for barrel racing and this is one step towards that end goal,” Seaton said. “But I never thought it would just be on three rodeos.”

Nonetheless, she made it a point to start the season strong as she claimed the titles at the San Carlos Apache Veterans Fair & Rodeo and the two-day rodeos at the O’Odham Tash Rodeos, amassing 30 points.

“We got off to a great start but we wanted to make sure that we had an opportunity to qualify for the INFR early so that we didn’t have to be racing to other rodeos to get qualified,” Seaton said. “And with the pandemic shutting everything down it’s actually a good thing that we qualified so early. I don’t have to worry about trying to get to other rodeos.”

With her INFR qualification secured, Seaton said she has a chance to work on her prorodeo ambitions.

“I filled my permit last month so now we’re rookie cardholders,” she said. “We were hitting at least one prorodeo per month and then the pandemic hit in March.”

In her last rodeo before they shutdown the prorodeo circuit, Seaton placed fourth at Queen Creek. And when things opened up she entered the Cave Creek prorodeo late last month.

“Right now I’m trying to get my Fourth of July rodeos lined up but it’s pretty tough because they’re limiting the number of entries,” she said. “They’re basing it on standings and circuit qualifiers so it’s kind of hard to get into the prorodeos that are coming up but we’re going to keep trying.”

With all the cancellations, Seaton said this year is being dubbed “the year of the jackpots.”

“They have four, five jackpots a week down here so we’re able to compete,” she said. “We’re going to keep working out and prepare for any type of performances down the road. Hopefully when October comes we bring home that title.”

With some down time, Seaton said she’s been exercising her horse and they’ve been doing a lot of conditioning work.

“We have a wash fairly close to our home and I ride Gypsy for about two to five miles, depending on how excited she is,” Seaton said. “We do that twice a week.”

In addition to this conditioning, Seaton said she incorporates swimming into Gypsy’s training regimen.

“Now that it’s hot in the Valley she swims laps at least once a week” at a special equine swimming pool, she said. “She swims for about 15 to 20 minutes and that’s usually a good workout for her. She also does weekly pulse electromagnetic therapy so I pretty much treat her like a queen.”