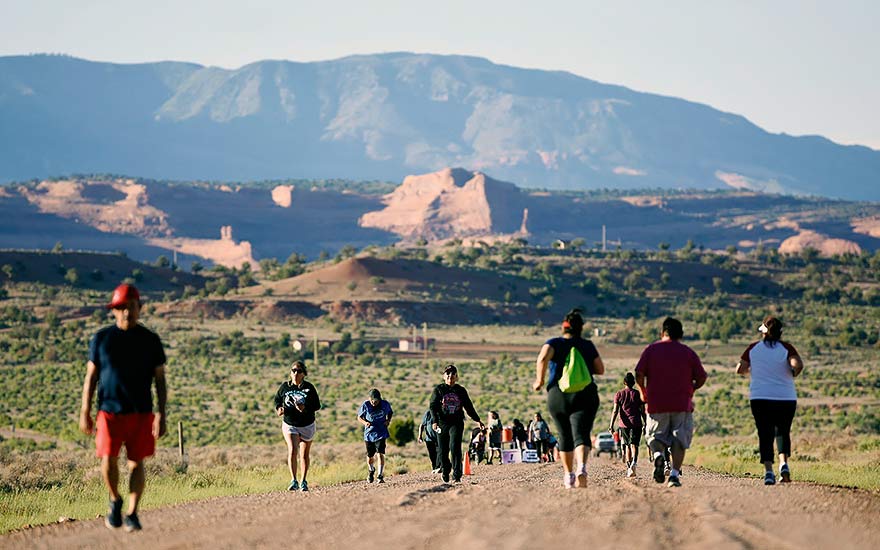 Navajo Times | Ravonelle Yazzie
Participants of the Just Move It event jog and walk down the dirt road on Tuesday evening in Cove, Arizona.

After 28 years, Ryan Jake finally decided to just move it.

Jake, along with five family members from Red Valley, took part in the 27th Annual Just Move It event on Tuesday.

It was Jake’s first-time ever participating.

“We were at home, and we kind of saw it one the internet,” he said. “We were, like, ‘Let’s go, it’s just right there,’” he said. “We wanted to get our little sibling out, my daughter, just get them out of the house.”

Jake, 28, who is originally from Fort Defiance but now resides in Red Valley, said he always missed Just Move It events and was happy to attend his first one.
“I got my first JMI T-shirt,” he said. “It’s pretty awesome.”

Jake was one of dozens to participate in the 13th JMI event held within the Shiprock Service Unit this summer.

There are seven stops left with the final stop in Shiprock, which will be held on July 30 at Shiprock High.

Roberta Diswood, recreation specialist for Northern Navajo Medical Center’s Shiprock Health Promotion, said the event has been smooth sailing since it kicked off in early May.

“The turnouts been pretty good,” she said. “We’ve been getting people coming in, we’ve been pretty steady of what we’ve had in previous years, that’s been the good thing about it.”

Diswood said her team worked on some changes this year. The biggest change was the trade out of T-shirts with insulated aluminum water bottles. Only new JMI participants were given T-shirts.

“We decided that – 26 years we’ve been doing JMI – and we wanted to try something different,” Diswood said. “We decided to spend a little bit more and we got insulated water bottles for participants.”