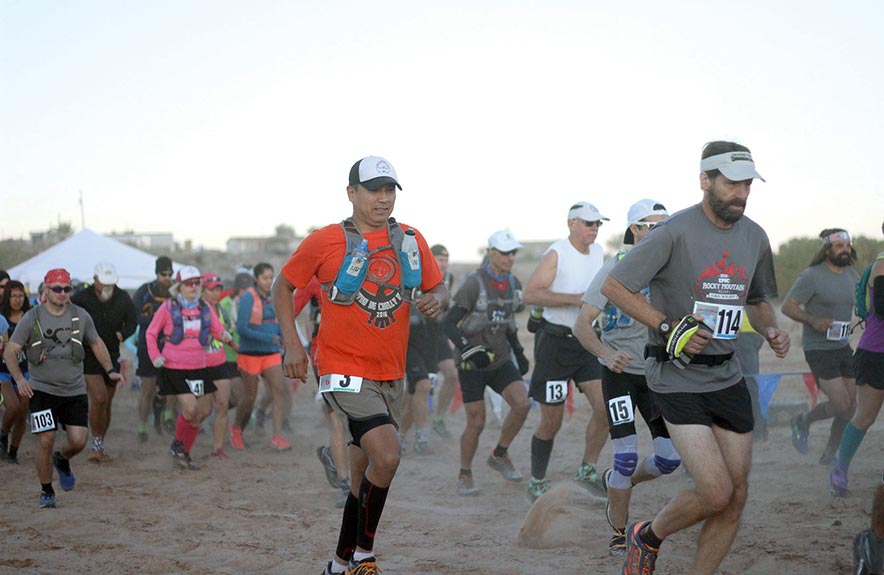 Submitted
Jerome Yazzie (orange shirt) sets his pace at the start of the 2017 Canyon de Chelly Ultra Marathon, a 55K race. The annual event will be run virtually due to the COVID-19 pandemic.

The Canyon de Chelly Ultra Marathon has been a passion project for Chinle Athletic Director Shaun Martin for a long time.

In 2013, the first ultra-marathon was held, done in collaboration between Martin and the Navajo Nation’s Parks and Recreation, and it became a yearly event every Oct. 10.

With only 150 open places, a raffle was held to select among thousands of runners worldwide who wished to compete in the 55K run.

This year would have been its eighth run. However, the annual trend was broken due to the COVID-19 pandemic. Martin made the announcement last Sunday on a Facebook video he live-streamed, breaking the news to the runner community.

Martin talked about how bad cases are on the reservation, stating that eight weeks ago one could have said that the Navajo Nation was the epicenter of the pandemic in the entire world.

It’s been a difficult but humbling experience for Martin. His grandmother had lived with his family for years, but with the ongoing pandemic and the Martins constantly going in and out of the house, they made the difficult decision to move her to her old homestead for her safety.

He also talked about his sister staying in the ICU and how her children are being watched over by their grandparents, as well as prominent members of the community who have fallen victim to the virus like police officer Michael Lee and musician Fred Thompson.

Martin also briefly talked about why he thinks the COVID-19 pandemic was so bad on the reservation, a high population of individuals with pre-existing health conditions, limited health-care infrastructure and technology, Navajo living in what could be considered poverty when compared to the rest of the U.S, little access to running water and how close relatives are, making it easy for virus to transmit from one to another.

“Believe us, this decision was not taken lightly,” Martin said in the video.

They waited as long as they could to see what would happen, but decided to make this announcement a month before the race would start since by September runners from far away would begin making preparations to travel to the reservation.

The Canyon de Chelly Ultra has become a renowned event in the world of running. Covered by major newspapers like the New York Times, runner magazines like Outside and even featured in two films with another in the making for IMAX, the marathon has garnered much attention in its few short years of existence.

Martin credits the attention to the unique circumstance of having only 150 runners participate. Because Canyon de Chelly is a national monument and is considered sacred to Navajos, organizers only allow a few runners in so as to not disturb the site.

Runners like Jerome Yazzie, assistant director for transportation at the Chinle School District, understood why the race was put on hold.

“It’s for the safety of everybody within the community,” Yazzie said. “It’s kind of an international race because people come from all around the world and with the pandemic going on it’s not safe to put it on. You got to think of the safety of the community.”

Yazzie has run in the marathon five times since its conception. He first started running as a way to keep his stepdaughter, Shaniya, safe whenever she went out for practice runs during her time with the Chinle High’s cross-country team.

Since then, they have been pushing one another and participated in 5K runs, marathons and finally ultra-marathons. The Canyon de Chelly Ultra in 2013 was the first time Yazzie ran 55K. Shaniya ran it in 2018.

“The first time I ever did it, I think it was the hardest thing I ever done as far as physically and emotionally,” Yazzie said. “Because I never done anything that hard that took that much effort.”

“We definitely respect the Navajo Nation’s decision (to close all national parks on the reservation) and we are going to honor that and not only are we going to honor it by canceling the race and pushing it into October 2021,” Martin said, “but we’re also going to continue to spread the word why running is sacred to the Navajo people and do a virtual race where people can participate worldwide and that’s why we’re doing it, we’re doing it to celebrate the Navajo Nation and to honor the Nation’s decision to keep our people safe.”

The Hashké (Warrior) Run will be held on the same day as the original race, Oct. 10, and will be done for this one time for the year 2020. It won’t be a 55K competition and it won’t stop at 150 runners – the event will be open to everyone.

There is no set mileage to run, instead Martin encourages everyone to run to the east to greet the new day and embrace the Navajo teachings that he wants runners to learn whenever they run in Canyon de Chelly.

“The morning of October 10th,” Martin said, “we’re asking them (participants) to go out and run to the east and truly embrace the Navajo teaching of running in the morning and the birth of a new day when the creator and the holy people are out.

“To celebrate the blessings we have received, to pray for themselves,” he added, “for their families and for the things that they hold dear, to push themselves and learn more about themselves, learn to overcome obstacle in their lives and to heal.

“Because we’re all hurting in some way shape or form so we want people to run out and heal because running is also medicine,” he said. “So by doing that, by running for your people and doing these four things when you run on October 10, we’re telling people that they’re going to become a warrior for their people.”

Participants will receive a necklace with a silver feather after they complete their activity on Oct.10. In his Facebook video, Martin stressed the importance of the feather and how every warrior needs a feather.

By the end of the race, Martin hopes that all the runners entered will learn these four virtues for becoming warriors: to pray, endure, learn and to heal.

In just two days, Martin said they already have 200 people signed up for the race, with each person paying a $40 for entry fee. They have people representing at least 38 states in the U.S and people from the countries of Switzerland, Honduras and Great Britain.

Martin hopes to have a thousand participants who will embrace the Navajo teachings of becoming a warrior.

Martin said it doesn’t matter how far you go or if you run at all. You can walk or even just do push-ups while facing the east. Exercise, do whatever you wish on Oct. 10 in the morning and tell about it online on the official Hashké site.

Martin said as soon as you type it in, they’ll mail the feather.

Although Jerome Yazzie was initially disappointed in the race being canceled (he won a place in the drawing earlier and was set to run this year), he will participate in the virtual run. Though he said it won’t compare to the actual ultra-run.

“It’s unique for me because I have somewhat full access to the canyon but it’s not the same when you share it with the people that ae experiencing it for the first-time during race day,” Yazzie said.

“Hearing them yelling and hollering down in the canyon and seeing the joy on their faces when foreigners or people from other states run beside you and enjoying it for the first time,” he said. “The canyon, then just hearing the hollering and the echoing in the canyon. You can see the joy on their faces and it’s an experience that I pretty much enjoyed the first five years that I’ve done it.”