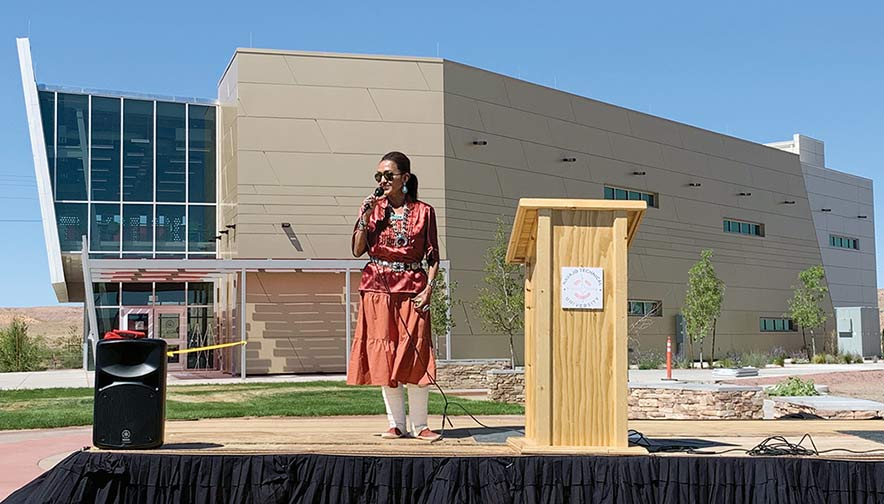 When Elmer Guy took the helm at Navajo Technical University in 2006, one of the first things he did was get a toehold in Chinle, which he considers the heart of the reservation.

He hired Arlena “Bo” Benallie to administer the new satellite campus and set her up in what associate professor Franklin Elliott recalled as “a little office near Imperial Market.”

That very year, with a starter budget of $15,000, Benallie initiated five classes, mostly held in Chinle High after hours, and welcomed the first 30 students to NTU-Chinle.

Before long, the university set up a humble gaggle of trailers adjacent to an NHA development, and enrollment started to burgeon. According to Benallie, about 1,000 students have graduated from the Chinle campus.

A little over a year ago, NTU unveiled its first permanent structure in Chinle, a 6,000-square-foot administrative and classroom building at the town’s south entrance — but all eyes were on the imposing two-story edifice rising behind it.

Last Thursday, in a scaled-down COVID-safe ceremony pretty much limited to the dignitaries giving speeches, the ribbon was gently untied on what is hands-down Chinle’s most interesting building, and one of the most significant.

The 20,000-square-foot structure of glass, grey-brown block and red plexiglass is “inspired by ideas of emergence, the surrounding desert landscape, Canyon de Chelly, and traditional Navajo building forms,” according to architect Tamara Begay of Indigenous Design Studio on the company’s website.

With few right angles, the building seems both futuristic and organic as it rises above the stark grey plain below Hospital Hill. It employs passive solar technology and state-of-the-art materials to make it energy-efficient. COVID permitting, it is ready to welcome students next spring.

The academic building includes classrooms, two state-of-the-art science laboratories, tutoring rooms, a library and lots of light-drenched space just for hanging out, presuming hanging out becomes a thing again. Guy, who confessed even he could hardly believe this was finally happening, sounded like the disembodied voice in “Field of Dreams.”

“Young people, they will come here,” he said during his turn at the mic. “It’s going to inspire a lot of people to come.”

Guy thanked former Arizona legislators Albert Hale and Jack Jackson Jr. for crafting legislation to forward a portion of the state’s sales tax to NTU, which money was used to build both the academic and administrative buildings at a total cost of about $30 million.

But perhaps the loudest kudos went to Juanita Gorman, who had sacrificed 38 acres of her grazing land for the two buildings and the eventual campus that will spring up around them, including dorms, faculty housing, a library, outdoor amphitheater and the piece de resistance – an environmental testing laboratory.

“We’ll be able to test water, soil, even test for COVID,” said Benallie. “Other universities will send their students to do their internships here.” Arizona State Rep. Arlando Teller pledged to fight for state funding for the lab alongside his fellow Diné representative, Myron Tsosie.

Vice President Myron Lizer said the new campus will produce the minds the Nation will need to expand its economy into agribusiness, biotechnology, energy, the medical field, transportation and communication technology.

He noted that it is estimated the world’s knowledge will have doubled between 1900 and 2050, and the next doubling will take place much faster. “If knowledge doubles and we’re not ready, then we’re left behind,” he said. “We need to get a generation of thinkers that says, ‘What if I was there?’”

Student senate President Deirdre Deswood said she was amazed at the opportunities NTU provided her — including a NASA internship — even when it was operating out of the trailers, and a nice new facility could only bode well for the students coming up now. “I heard talk about this new campus ever since 2006,” she said. “It seems like a long process, but it went up pretty quick.”