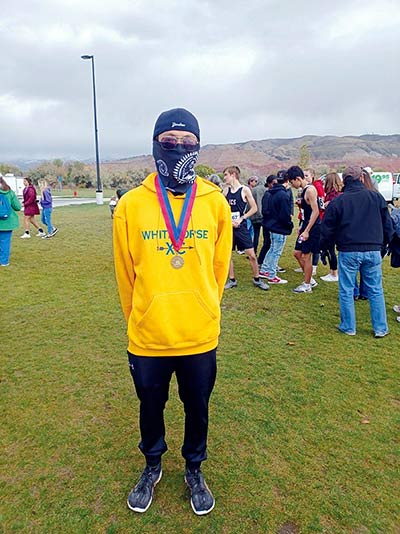 The young athlete is the only student from Whitehorse to get this recognition for his school this year. It is the product of four years of hard training.

“Coach Silversmith told me that the AD (athletic director) had a big surprise for me,” Manygoats said. “I didn’t know what it was, and it really was a surprise. I wasn’t expecting it at all.”

Since he was a child, Manygoats has been playing sports, joining his first organized sport in sixth grade. Since then, he has played cross-country, track and field, basketball, and football. He said cross-country is probably his favorite.

“Probably because it’s just you and how you performed and learning to run better helps with all the other sports I play,” he said. “It taught me some lessons like not to give up, keep going even if it’s going to be hard, just keep pushing through”

His mother, Darlene Manygoats, describes him as a hard-working, dedicated young man. When he is at home, he always wakes up early to feed the animals and help any member of the family who asks.

Darlene thinks sports have positively impacted her son as it motivates him to keep up with his studies and exceed. Since his freshman year, he has been an honors student and is one of the top graduating students.

“He’s very humble,” she said. “He’s a quiet person. He does not boast and has good sportsmanship.

“He wants to get to know people in any game he is in,” she said. “He makes conversations and encourages his teammates (and) he shows it through his actions. I was really proud of him because he notices when kids are struggling and helps them.”

Darlene remembers his first time going to state, he didn’t do as well as he liked, and it was there that he made the goal to get a medal before he leaves high school.

“He started training harder,” Darlene said, “He’s a runner, so he is always running on his free time.

“He started running more and really training himself and doing research on his own. He wanted to do this ever since he set a goal for himself.”

Part of his training comprises the Navajo tradition of running in the mornings, greeting the dawn, and praying as he does so. Such dedication is what his mother believed help him to place at state and earn All-State in his senior season. Nothing, not even a pandemic, hampered him.

Cross-country coach Boyd Silversmith is an experienced coach who just started at Whitehorse High. He knew Manygoats for only a year, but he liked what he saw.

“He’s a good athlete and a good student,” said Silversmith, who previously coached at Utah’s Monument Valley. “He’s well dedicated in the sense that he does his very best to learn in the classroom and what is expected in the classroom.

“He does his best to meet those expectations, and that rolls over into his personality as an athlete,” he said, “where he took it upon himself to do the extra work to hone his skills in running.”

He also liked Weston’s positive attitude and how he is always supportive of his teammates on and off the field. His dedication is also great as he is always on top of his classes and is always eligible for sports. Weston is taking college courses at Utah State University.

Whitehorse High was closed for almost an entire year in 2020, and there were no sports. However, Silversmith was pleased to hear that Weston was still running independently.

“I saw him at the beginning of the year running, and I thought, ‘OK, this kid has been running on his own time.’”

“He’s just putting in the extra time when he runs, and it shows on the first day back at practice,” he said, “I could tell he was going to do well.”

This season was difficult for the team as it returned from a year of hiatus and had to adapt to many COVID-19 precautions. Silversmith commends his team and its efforts this year, especially as many runners ran while wearing a mask.

Wearing a mask is optional in Utah, but Weston kept his on wherever he went, including cross-country meets. Often, he would be asked why, and he would just say, “Because my Navajo Nation president asked me to.”

At his last state cross-country race, Weston pushed himself and came in third place at 17:33 minutes, just 29 seconds behind first place.

Silversmith thought it was no surprise that Weston got All-State status, which other coaches across the state would have to agree on.

“In my years of cross-country, I came across a few Native kids who put in the time and effort to be a good runner, and Weston is part of that group of boys I have coached that has put the extra time and effort into doing really well with the sport,” Silversmith said.

Silversmith is sure that if Manygoats so chooses, he could run at the collegiate level and be successful.

Weston has many interests ranging from animal care to building and wants to become an engineer. However, since the pandemic, he is now considering being a health care worker.