Scorpions capture Gallup Invite, set to take on 5A competition

The Farmington boys’ basketball team had players contribute up and down their lineup on Saturday night. 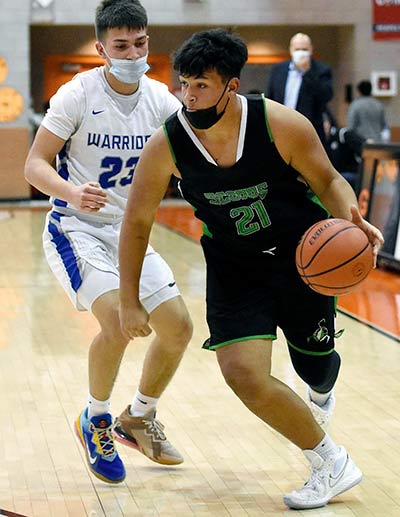 Special to the Times | Ravonelle Yazzie
Farmington’s Trel Griego dribbles the ball down the court during the second half of the championship game against the Socorro Warriors on January 8 at the Gallup Invitational.

That collective effort helped the 5A Scorpions to 56-41 win over Socorro, a top 3A team, in the championship game of the Gallup Invitational.

“Our whole team had more weapons,” Farmington coach Larry Don Chitty said. ” Being a 5A school, you hope to have more weapons than a 3A school, so it was nice to go get that.

“Our team played so well together, and that’s what it came down to,” he added.

The Scorpions had 10 of 11 players score at least two points in the 15-point win, with freshman Landon Begay coming off the bench and leading the way with a dozen points.

“He can flat out shoot,” Chitty said of his Begay. “And what helps is we have those two other guards that Socorro keyed in on, and that left him (Begay) wide open.

“That was a huge difference in the game,” the Farmington coach added. “For a freshman to come in like that is really big.”

His points came from beyond the arc, including three in the second quarter.

“Honestly, I was scared that I wasn’t gonna hit anything,” Begay said. “Luckily, some of them went down.”

Senior Duda Jackson, who pumped in a game-best 30 points, led the Socorro Warriors with 16 of those points coming in the first half with his team trailing 31-25.

He scored all but two of Socorro’s 16 points in the second half, but it was not enough.

“He’s a phenomenal player, and a phenomenal kid,” Socorro coach JJ Griego said of his pupil. “And he’s got great attitude.”

The second-year coach said fatigue started to set in as his team never led in the championship game.

“We left it all on the court (on Friday) night,” Griego said of their 74-62 win over host Gallup. “You could by the second quarter when our legs weren’t there. All of our shots were short, and we were missing layups.”

The Socorro coach said playing in the Gallup tournament will help them tremendously down the road.

“We played two 4A teams and one 5A team,” he said. “I didn’t realize until this morning that Farmington lost only one game. They’re a quality 5A school, and to be honest, if we were playing with fresh legs, we would give them more of a competition. We just didn’t have the legs tonight.”

In their semifinal win against Gallup, the Griego-coached team shot lights out as his team nailed 18-of-28 shots for a 45-30 cushion in the opening quarter.

The host Bengals did get within 56-51 at the start of the fourth, but Socorro ended the final eight minutes.

And although the Bengals got within 56-51 at the end of the third quarter, Socorro outscored Gallup 18 to 11 in the fourth headed by the 29-point effort from Marcus Armijo and the 26 turned in by Jackson.

Farmington kept a watchful eye on Armijo in the title game as he was held scoreless.

“We watched them for a couple of games, and I thought if we keep him from shooting a bunch of threes, and try to stay in front, we’d be OK,” Chitty said.

As for Jackson, the Farmington coach said his players didn’t have an answer for the speedy guard.

“We tried double-teaming him,” he said. “We tried to get help defense, but we can’t get help there fast enough. He’s that quick.”

Chitty said winning the Gallup tournament is a huge accomplishment for his team as it has eyes set on battling teams at the 5A level.

“We’re just trying to get better at this 5A thing,” he said. “This year we said we have to get better at the 4A stuff first, and it’s huge for us to come over here and do this. I’m glad because I don’t think we’ve ever won this tournament.”

Coupled with last night’s win over Miyamura, the Scorps have improved to 15-1 overall.

“Our schedule has been mostly 4A teams,” Chitty said. “In years past, that has given us problems, so I’m glad that we’re at least beating 4A teams.

“One of our struggles has been moving the ball and executing on offense the last couple years” he said. “They do that much better, but we still have to get better at it.”

Farmington’s only loss came at the hands of 5A Carlsbad during the Artesia tournament two weeks ago.

“They beat us pretty good, but it was kind of wakeup call,” Chitty said. “It’s tough for us because when we play up here, we see a lot of zones and smaller players. When we go down there, I mean these guys are huge.”

Admittedly, Chitty said his team was shell-shocked at first with the Cavemen of Carlsbad, but it played much better as the game went along.

“I think the Carlsbad game kind of caught us by surprise,” senior guard Cayden Yazzie said. “We’ve never seen anybody as tall and long as they were. They were really physical with us, and we really didn’t match up to what they had, so we fell short to them.”

“They were outworking and out-executing us,” he said. “They caught us off guard, but it was good to see that. We gotta have games like that to get better.”

Chitty said his squad will see that length and size when they start district play with Sandia on Tuesday.

“That will tell us right then on where we’re short or what we’ve gained,” he said.

Besides Sandia, the Scorps will play Eldorado, La Cueva, Piedra Vista and West Mesa in District 2-5A.

Chitty said it’s been like that since his team joined the district four years ago. The Scorps have finished behind Sandia and Eldorado in the last couple of years.

“I think we’ve caught up with them a little bit,” he said of the two teams. “I don’t think we’re there yet, but I have a little bit different feeling than I have the last couple of years.

The Farmington coach said making the playoffs is something his team wants to do.