Wings facilitators are role models in and out of camp 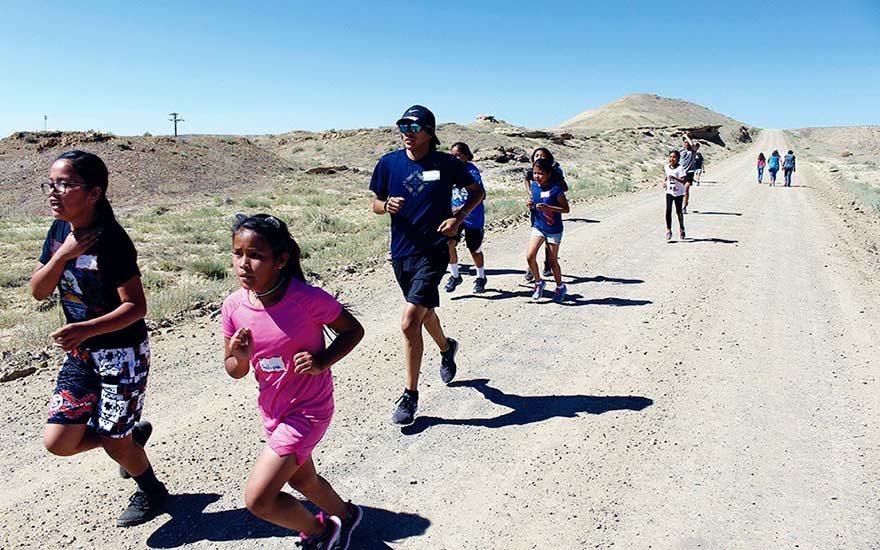 Submitted
Wings participants get their blood pumping during a morning run at a Wings Running & Fitness camp in Newcomb, New Mexico on June 20.

The Wings of America running and fitness camp facilitators are hard at work for the 2019 season.

The team, which is made up of local Navajo and Pueblo high school and college runners, has been traveling throughout New Mexico and Arizona hosting their running and fitness camps.

Dustin Martin, executive director of Wings of America, said the facilitators have had a successful first half of summer and are gearing up for the second half, with many community stops left on their list.

“They have been traveling around as usual, serving Navajo youth everywhere from as far west … we had a camp at Gap a few weeks ago,” he said. “It’s been a very busy summer, and we still have a number of camps to go.”

The camps are hosted by facilitators, which are made up of three sub-teams: Chinle Team, Shiprock Team, and Pueblo Team.

Known local runners include: Santiago Hardy from Chinle, Alisia Honyumptewa from Chinle, Autumn Harrison from Kirtland, Kolby Blackwater from Kirtland, Chamique DuBoise from Window Rock, to name a few.
While many of the facilitators are new, there are a handful who have returned to help with the summer clinics.

Martin said those who have returned and are familiar with camp operations, have made for smooth sailing at each camp site.

The ways in which the camps operate has shifted a little.

In years before, Martin said, the camps were organized through one Navajo Nation Service Unit — Shiprock. The organization now works with all service units.

Martin said the new setup has it perks.

“In the long run, it helps us respond to the request and desire of each of the service units,” he said.