Behind a cache of weapons the 2021 volleyball season may have another contender at the 4A level. 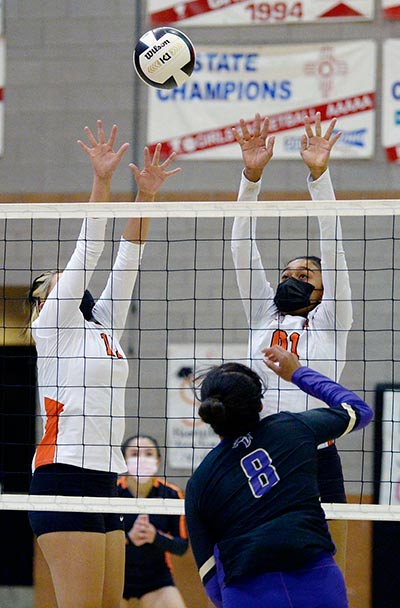 The upstart Gallup Lady Bengals wants to be part of that conversation during next month’s state playoffs.

The Bengals have posted a 15-5 mark, including a 7-0 start in District 1-4A play following Tuesday’s win over city rival Miyamura.

Gallup is looking to be one of the top four seeds in the 12-team state bracket.

“That’s what we’re hoping for but you never know with the NMAA,” Gallup coach LaRena Morris said.

The New Mexico Activities Association made some changes as the governing body for high school sports eliminated pool play action at the state tournament.

In addition, teams will no longer play for a state bid in the now-ousted district tournament.

In other words, the new format eliminates the chance for a lower-seeded district team to make the state field.

And with no pool play, the top four teams will earn byes into the quarterfinals. The teams seeded No. 5 to 12 will have to contest a play-in match with the higher seed hosting a single elimination game on Nov. 9.

The winners from that play-in will advance into the quarters, which will start on Nov. 12 in Rio Rancho with the tournament shifting into a double elimination bracket.

“I’m optimistic about state,” Morris said. “I think this team has what it takes to actually get to that championship game. The chemistry that they have is phenomenal and they’re not selfish whatsoever.”

The Gallup coach said her team is willing to pick up the slack where it’s needed.

“They’re all working together,” she said. “I mean, if we need someone to block, someone to server, set or pass they’re all there helping each other. They’re all humble and, you know, they’re willing to step in where it’s lacking.”

Last season the Bengals were a state playoff team, losing to eventual state champs Albuquerque Academy in the first round.

The Bengals got most of the cast back from last year’s squad headed by the 1-2 threat from Hailey Long and Jordan Joe.

The two power hitters are back for their senior season but the Bengals have added more depth in the hitting department.

Through 18 games (not including the last two) the Bengals have registered 523 kills with Long leading the way with 171 while Joe has logged in 157.

“Volleyball is a team sport,” Joe said. “You can’t win games by yourself and having teammates to have your back is a big plus because when one of us is down we have others that can pick up the slack.”

Morris said having those extra pieces makes them a well-rounded team.

“I had most of these girls for two years and they all have confidence,” the Gallup coach said. “They’ve been testing each other on the court and some of the younger players have caught on.”

In particular, Morris said Whitehair, her freshman middle blocker, has grown by leaps and bounds.

“She’s our first line of defense,” the Gallup coach said. “She’s kind of brand new and she started playing with us her eighth grade year. She’s learned a lot and she’s caught on quick.”

Haines, meanwhile, is another option Gallup has.

“She’s also been playing with me since she was an eighth grade,” Morris said. “She plays my right side and she’s also my second setter.”

In those 18 games, Haines has recorded 63 assists while senior Lynda Mike has amassed a team-best 405 assists.

“I have four seniors on the court that have been playing with me since they were eighth graders,” Morris said of Mike, Long, Joe and Chaylee Becenti.

“They know my coaching style and they know my expectations,” she continued. “They use that on the court and they’re my captains.”

Along with her senior teammates, Long said they’ve embraced the leadership roles and they want nothing but good things this season.

“Her expectations has always been high and I’m glad she puts that on us,” the Gallup hitter said. “We know what she wants and the young ones have really stepped up and helped us.

“We’ve made some improvements, but we can still push and be better,” she added.

And while the Bengals are not synonymous as a volleyball powerhouse, Long said she would like to change that this year.

“If we win state we’ll put Gallup on the map and people will know that we have a state title in volleyball and basketball,” Joe added. “If we can do that it would be great knowing that we can give inspiration to some of the younger players who want to play volleyball for Gallup High.”