Gritty Aztec girls win to advance in 4A soccer 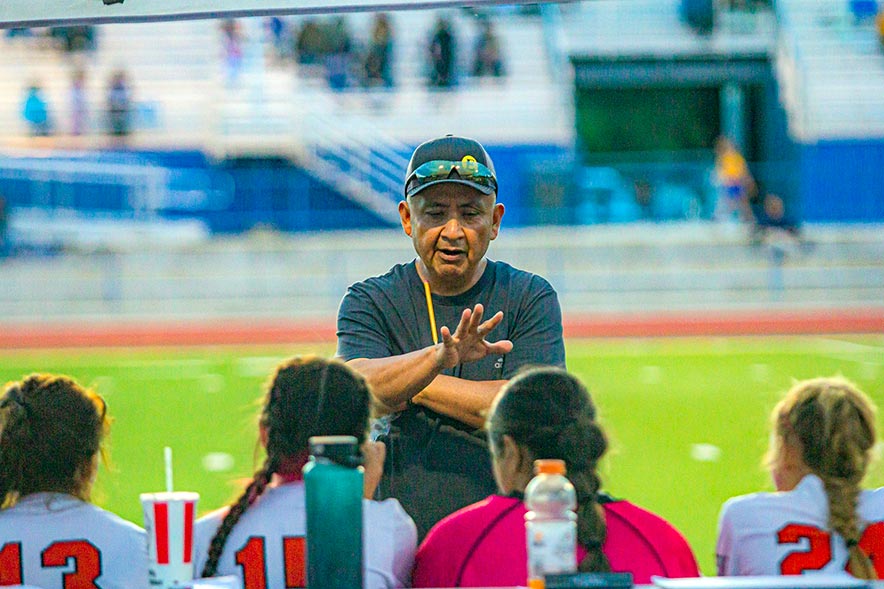 File photo
First-year Aztec girls’ soccer coach Leroy Nelson mentors his players during halftime on Oct. 7. The Lady Tigers defeated Moriarty in the opening round of the 4A state playoffs by a 2-0 count on Tuesday.

The gusty winds on Tuesday wreaked havoc for the Aztec girls’ soccer team.

But the Lady Tigers didn’t let that deter them as they advanced into the Class 4A state quarterfinals with a 2-0 road win over the Moriarty Lady Pintos in the No. 8-9 matchup

“We did very well as far as possession of the ball,” Aztec coach Leroy Nelson said, whose team improved to 8-11-2 overall. “We had several attempts on goal but the wind blew it out of the way.”

The first-year coach said his team skillfully controlled the possession of the ball 80% of the time, giving them more opportunities to score.

“Anytime you do that, you’re going to win games,” he said.

The Tigers scored one goal each in both halves with senior Ashley Sexton and junior Geremyah Martinez finding the net.

Of the two, Martinez’s goal was assisted thanks to hustle play of sophomore Rheala Herrera.

“We just had more touches and, overall, we worked really well together,” said the Diné coach. “We just kept plugging away.”

For much of the season that’s been the mantra for the Aztec team that lost 14 seniors during the spring season last year.

Of the players that returned, Nelson said, only four played on last year’s squad, as there were no sub-varsity teams last season due to the ongoing pandemic.

“Even though we had some tough losses, I always emphasized that we had had to continue to plug away,” he said. “We turned things around with this young team. We kept plugging along and we kept on working and our chemistry.”

On Friday, Aztec will take on top-seed St. Pius at 4 p.m. in Albuquerque.

“We definitely have our hands full,” Nelson said.

Earlier this month, the Tigers lost a 6-0 decision to St. Pius.

“We’re excited to play them again,” Nelson said. “We have positive attitudes and we’re taking it one game at a time. We’re going to keep playing hard and we’re looking to make some progress.”

In other girls’ action, the Bloomfield Lady Bobcats capped its season at 9-7-2 overall after coming up short to No. 7 Los Lunas Valencia by a 2-1 count.

In the boys’ bracket, the Miyamura Patriots and the Bloomfield Bobcats also ended their respective seasons on Tuesday.