Coleman signed her letter of intent to play for the women’s volleyball program at Rust College, a historically Black liberal arts college.

“It’s an HBCU school and I wanted to learn some things about my culture,” said Coleman, who is Diné and African-American.

Coleman said picking the NAIA Division I college was an easy choice since her older sister, Jasmine, attends the school, playing on the women’s basketball team.

“It opened my eyes up when I went out there to drop her off,” she said, noting that she had an opportunity to practice with the Rust College volleyball team. 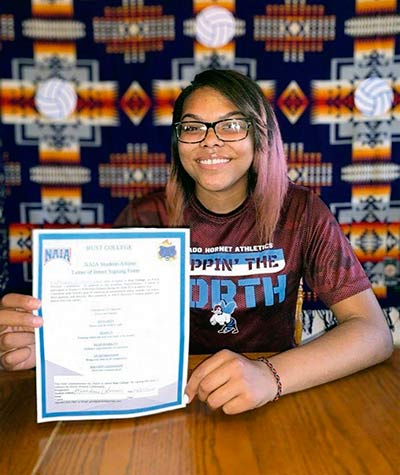 “I really liked the interaction I had with my coach and teammates,” she said. “I’m excited to be going to college and I’m glad the volleyball coach gave me this opportunity to continue my education and volleyball career.”

Coleman said she feels pretty confident about taking this next step in her life as she’s contemplating on what to major in.

“I feel good about leaving for college,” she said. “It gives me the opportunity to learn new things off the reservation and explore the world and meet new people. I’m looking forward to the opportunities that are out there waiting for me. I can’t wait to finally go out there and grasp what I’ve worked for all these years.”

Coleman said two other colleges were on her radar as Yavapai Community College in Prescott, Arizona, and Prairie View A&M in Texas sought her services.

Rust College, however, prevailed with the full-ride scholarship they offered.

“I gave her some insight and we looked at different things,” Coleman’s mother, Ivanna Jones, said. “What we really looked at was the financial side of things.”

Jones said she is a single mother of five and it was important for her daughter to get her college paid for.

“That was what we were looking for,” she said.

Coleman said she’s grateful to be playing at the next level, and she thanked her siblings for inspiring her.

“My sisters worked so hard to get their scholarships,” she said of Danielle, Jasmine and Jamika. “They inspired me to seek out the same thing and never let go of my dreams.”

Coleman said her older brother, Jamaal, motivated her to work hard as he completed his redshirt freshman year with the Cochise College men’s basketball program.

In addition to her siblings, Coleman was equally quick to acknowledge that her mom and aunt, April Clairmont, have also influenced her.

“My aunt was a hall-of-famer,” Coleman said. “And my mom has been with me all these years and she coached me. She never played favorites with me. She made sure I worked hard and earned what I deserved. I’m grateful to have them both in my life.”

And although she has some reservations about her baby leaving for college, Jones said she’s excited that her youngest daughter is ready to leave the family nest.

“People have asked me about how I would feel when she goes off to college and I think I’ve accepted it,” Jones said. “Of course, I’ll have my emotional days but I’m happy to see her go after her dreams.”

Jones said her daughter put in the work to be an imposing volleyball player as she played three of four seasons on the Ganado High volleyball team. (Coleman sat out her sophomore season due to a foot injury she sustained at a volleyball tournament.)

“She works hard at whatever she sets out to do,” she said. “She’s very coachable and she was a leader on and off the court. She picked up the slack in the places we needed her and she’s a team player.”

And although she was a three-sport athlete in high school, having also played on the basketball and track teams, Coleman said playing volleyball collegiately was what she wanted to do.

“It’s been a part of my life ever since I was a little kid,” she said. “Playing volleyball at the next level is what I wanted to do and I hope to make a difference.”

Coleman wanted to thank all of her coaches, including high school coach Jerome Burns, for their wisdom. She also expressed gratitude for her family, friends and teachers.