Family’s blacksmithing hobby helps them ride out the curfew 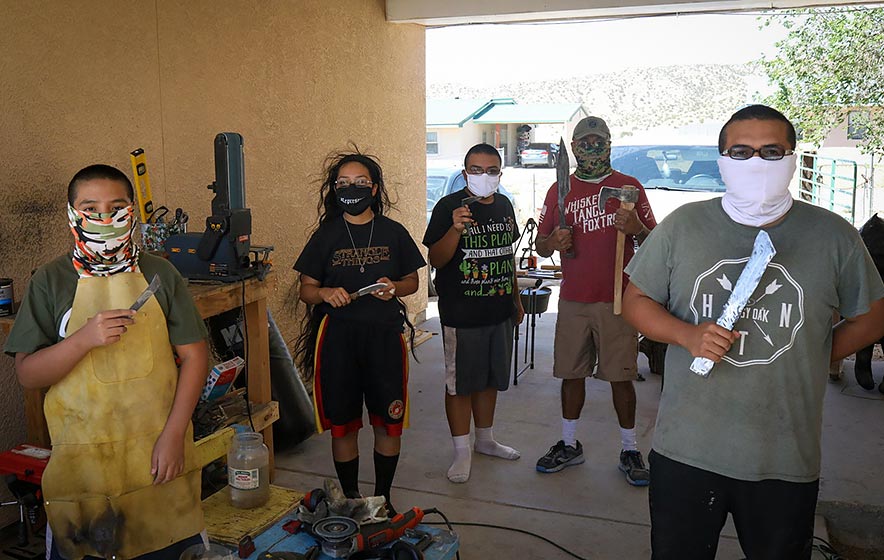 As a stay-at-home dad, Michael Mitchell had already perfected a few techniques for “getting my kids out of their rooms.” But after the curfew orders went into effect, he had to up his game to keep his four teens and young adults from going stir-crazy while their mom, a nurse who works at an assisted living facility, was laboring long hours on the front lines.

Although he had some trepidation about letting his youngest two work around a 2,300-degree forge, he decided to share his blacksmithing hobby with them. To his surprise, it took off — for all of them, from 13-year-old Hunter to 22-year-old Mike. “They all really like it,” he said as his quartet of offspring nodded in agreement Monday.

Mitchell’s own interest in blacksmithing is relatively new — about a year-and-a-half ago, he started noticing interesting metalwork — a door handle in Gallup, some simple projects on the internet. “I thought, ‘I already know how to silversmith,’” he said. “I can do that.” He started out heating strips of rebar or scrap metal in his wood stove and bending or hammering them into shapes.

Then he got interested in knives. The Mitchells had been studying jiu jitsu as a family for years, and at one point took a class in Apache-Navajo knife fighting (don’t worry, they use plastic dummy knives). The more Mitchell learned about blades, the more he saw them everywhere: movies, books, the internet. He learned about Indian hunting knives, Spartan swords, Viking seaxes and bearded axes, Japanese tantos and katanas.

In the Iron-Age battles he read about, there was often a famous sword, but you never heard about the blacksmith who made it. “To me, the blacksmiths are the unsung heroes of battle,” he said.

Sadly, he discovered most modern knives are made in China, engineered by computers and produced thousands at a time. The once-revered art of bladesmithing is critically endangered.

But not at the Mitchell house, where Hunter, Mike, their 17-yer-old sister Amy and 15-year-old brother Myron take turns at the forge in the family’s carport while hammers ring and grinders buzz. Is there a quarantine going on? This family barely notices.

Amy is making a knife out of a railroad spike, crafting the handle out of parachute cord. “It’s pretty exciting to learn a new skill,” she said. “I was surprised how much strength and endurance it took. My forearms were sore for about a week.”

“If you’re going to be a blacksmith, it helps to be in tip-top shape,” agreed her father.

Mike is making a tanto, a short sword that was a samurai’s sidearm. Hunter is also making a knife, but Myron, the green thumb of the family, prefers to beat swords into plowshares instead of the other way around. After telling his dad he wanted a small, hand-held hoe for his cornfield, “He told me, ‘Make it yourself,’” recalled Myron, “and then he taught me how.”

Myron’s hoe is beautiful, hefty and solid. “It breaks up the ground like it’s nothing,” he declared proudly. Sure, he could have bought a similar tool for $10 at the hardware store, but “I like knowing that I made it myself,” he said. “It’s very satisfying, to make your own tool.”

The kids’ mom, Charlene, doesn’t participate in all this metal madness. By the time she gets home from work, she’s tired enough that banging on a chunk of tin is not the first leisure activity that comes to mind. But she does encourage it.

“It keeps them busy,” she shrugged. “They’re not talking about alcohol and drugs. And it keeps them fit.”

Of course, you can’t spend all day every day at the forge. The Mitchells also run, work out and play instruments together, and they’re learning American Sign Language. The two younger boys are home-schooled, while Mike and Amy are taking online classes at the University of New Mexico-Gallup. Both hope to become nurses like their mom.

As far as activities, “I like to mix it up,” said Michael. And meanwhile, there are a few more cool handmade knives in the world.

“I tell my kids, ‘When you’re hammering that metal, you’re breathing life into it,” Mitchell said. “’A piece of your spirit is going into that blade. This knife is going to still be on earth after you’re not around any more.’”

Nothing like a sharp observation to cut the dullness out of staying at home.

Information: If anyone is interested in learning how to blacksmith or bladesmith, Mitchell is happy to share tips and some resources he has found. He will respond to emails at fourwarriorz@gmail.com.