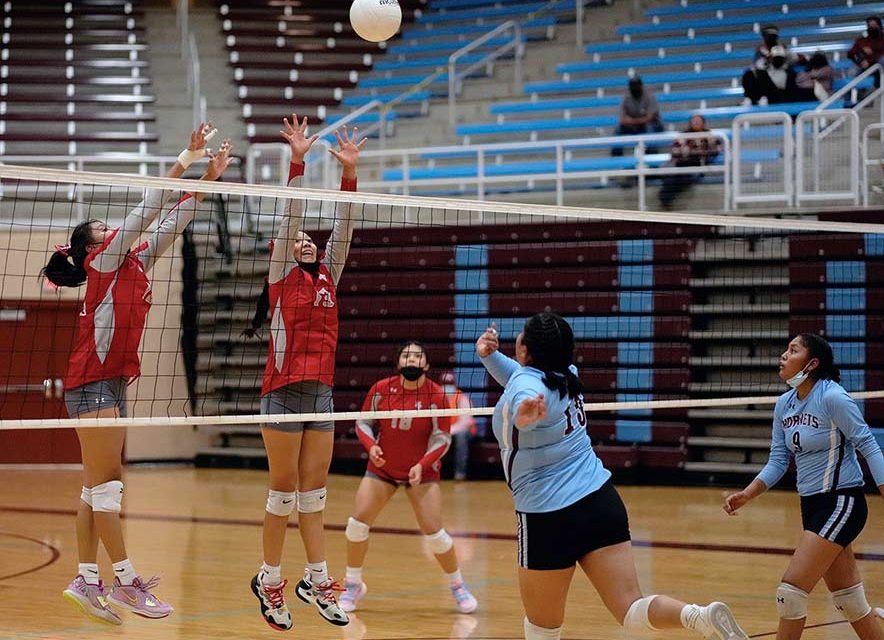 The Monument Valley Lady Mustangs started this week’s statewide volleyball rankings at No. 19 by the Arizona Interscholastic Association.

Longtime MV coach Rennell Gilmore expects her team to move up in the coming days and weeks as the Mustangs have nine scheduled games left in the regular season.

“We don’t have a lot of conference or region games like most teams do,” Gilmore said on Monday. “Everyone else has eight or more games, and we have (six) games, so we’re going to catch up this month.”

The AIA rankings will help determine the state seedings, with the top eight teams will make up the 16-team state bracket. Teams seeded No. 9 through No. 24 will have a play-in game, with the winners advancing to the 16-team field.

Like most squads, the Mustangs want to be among those top eight teams.

To help that cause, MV improved 3-0 in 3A North Region play after sweeping Ganado at the Hornet Pavilion on Monday.

“I’m glad we got to play Ganado,” Gilmore said. ” They were in 2A for a couple of seasons, so we haven’t played them in a while. It’s nice to play them again.”

Ganado coach Alyssa Dalgai was just as ecstatic to play MV as the two schools battled each other for the 3A state crown in the 1990s.

“The girls were excited to play them,” Dalgai said. “You know, they won the Farmington tournament, so we were expecting them to be good, so our goal was to come out and do our best and have fun.”

With the sweep, the Hornets dropped to 2-2 in region play, but Dalgai said it’s too early in the season to count them out.

“It feels like we’ve been playing for a while, but we just hadn’t had any conference games,” she said. “Now we’re getting into it, and we’re gonna start to run with it.

“I have some seniors, and it’s their last year, so we want to do the best we can in the 3A North,” she added. “We’ve had our ups and downs, but it’s always a goal to make state.”

In Monday’s match, the first-year Ganado coach said her team played well in spurts, but in all three sets, they started slow.

In the opening set, her team trailed 9-4 as the Mustangs got two kills each from junior middle hitter Kaleilanamarie Maiava and outside hitter Melanie Kescoli.

But through some savvy play, the Hornets cut into that margin with some off-speed hits. A stuff block by middle hitter Kiyarra Curtis pulled the home team within 15-13.

Consecutive kills from Kescoli, however, shifted the momentum to the visiting team as MV opened up a 23-15 cushion.

Ganado had one last gasp, as it saved a couple of match points and got within 24-22, but MV ended the opening set with a timely hit from outside hitter Ashlyn Singer.

In the next set, the Gilmore-coached team opened a 13-4 advantage behind 10 winners, which included four kills from sophomore Juliet Mitchell and two aces from junior Niaomi Benally.

MV built an early 13-6 advantage in a carbon copy of the previous set.

This time, however, Ganado made the Mustangs sweat it out as the Hornets got within 20-19 following three consecutive kills from junior outside hitter Kiersten Curtis.

A timeout by Gilmore got the Mustangs refocused as they scored the last five points to complete the sweep.

“We got a little shaky, but like I’ve said from the beginning, every team in our conference is good,” Gilmore said. “We got to be ready for, and one of our goals is to start strong and then finish strong.”

Maiava echoed those same sentiments as this year’s squad is looking to make a name for themselves. With a senior-heavy squad last year, Gilmore elected to play her graduating players since they missed their junior season because of the pandemic.

“Coach reminded us that we have to do better,” Maiava said. “I honestly believe that we can be one of the top teams in the state, and I think we’re playing at a really good level.”

Given the circumstances, Maiava had no qualms about not playing as much last season.

“I played with my sister last year, and I let her have her playing time because she didn’t have a junior year,” she said. “We allowed them (last year’s seniors) to play all the time.”

Maiava said this year’s squad is taking advantage of all the playing time they’re getting.

“We’re adjusting, and I think we’ve come a long way,” she said.

“It’s really fun to get playing time,” she said. “I mean, we really looked up to the seniors last year, and it was sad that they lost a year because of Covid.

“It’s a new year, and we’re trying to fill in some big shoes,” she added. “We’re a young team, but we really want to win our conference and get a good seed for state.”

As the defending 3A North Region champions, Dominquez said they’re looking to repeat, and she believes that Tuba City is their main rival.

“I think our top competition is going to be Tuba City, but we’re not going to underestimate anyone in our conference,” she said.