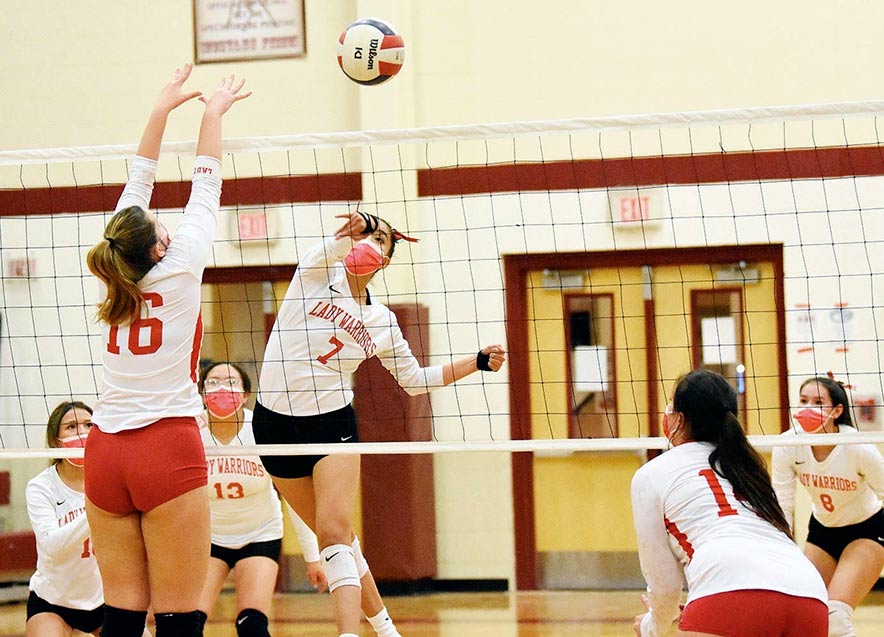 In its fifth straight look at a first round playoff game, the Pine Hill Lady Warriors took care of business in Tuesday’s Class 1A play-in game.

The Warriors defeated the Cimarron Lady Rams in straight sets in a No. 8 vs. 9 seed at Ramah High School.

“We were very determined and focused to make it to Rio Rancho,” said Pine Hill coach Carlett Daniels, whose team improved to 18-5 overall.

“Our plan was to come out swinging,” he said. “We just wanted to keep attacking, so we came out really strong.”

In other state tournament action, the Crownpoint Lady Eagles and the Zuni Lady Thunderbirds had their seasons cut short in the 3A play-in game.

In its sweep over Cimarron, Daniels said his team didn’t look back after winning 25-8 in the opening set.

But in the third, the Rams strung together a late run to make the match a little closer than what Daniels would have liked.

“They were hitting on us and that’s the stuff that we need to go up and block,” he said.

“She’s our tall girl and she plays middle and outside,” he said. “We get a lot of hits from her and she stepped up tonight for us.”

The Pine Hill team also got some big contributions from senior Baily Nez, their other middle hitter.

“She also stepped up,” the Pine Hill coach. “She gives us hits but she also serves well. That is how we get our points from her.”

Daniels said they’re happy to be picked as one of the 12 teams to make the playoffs, especially as an at-large team.

Pine Hill finished as the reserve champion in the District 1-1A race in with a 4-2 mark. They finished behind district champ Ramah, the tournament’s No. 2 seed.

“This is our fifth consecutive year going to the playoffs,” he said. “We kind of made our name known out there, so now we’ve got to step up to the challenge.

“I’m super proud of them,” he added. “They’ve been fighting and working hard all year. I’m excited to share their experience, and we’re gonna give it all we have.”

And while they have a tall task of facing Melrose, the Warriors will have a chance to work it way back into tournament if they lose on Friday as the tournament will shift into a double-elimination format for the next two rounds.

The format will then be switched into a single-elimination tournament for the state semis and finals.

“We’re excited to play them again,” Daniels said of Melrose. “We matched up them last year and we almost stole a set from them.