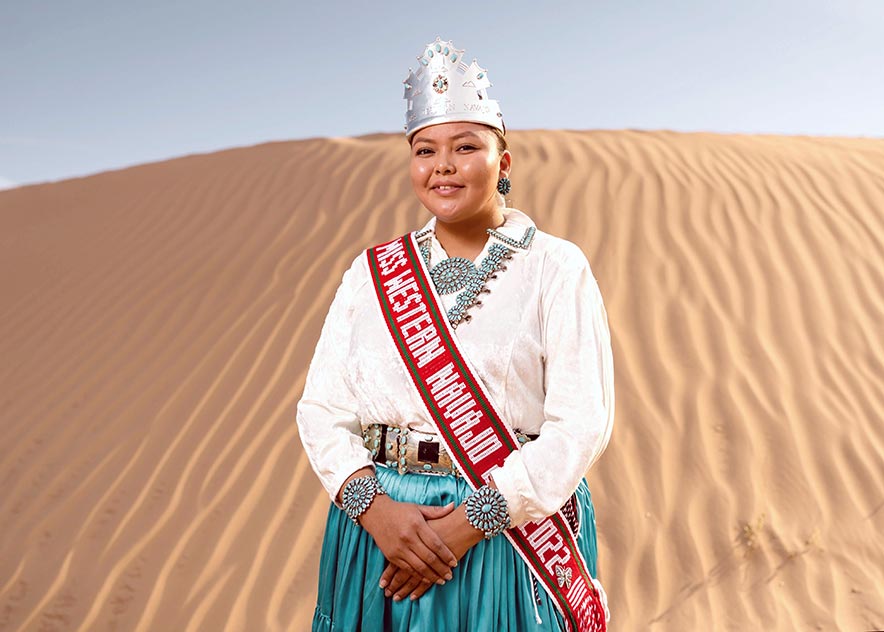 The only person who knew they were contestants in the Miss Western Navajo Pageant was their nálí asdzáán, Sarah Nez, who kept the secret from the rest of the family.

Joyceline Wero and her younger sister, Thomasina Wero, woke up and got dressed by 6 a.m. on Oct. 30. On their way out the door, their mother, Glenda Wero, asked them why they were dressed up and where they were going.

Thinking her daughters were spectators, Glenda waved them off and the two left for Legacy Inn in Moenkopi, where the pageant took place.

When they arrived at the hotel, they learned they were the only two contestants competing for the Miss Western Navajo crown.

“I looked at my sister,” Joyceline said. “We said, ‘Oh, no! Are we really the only two? This whole event is based around just us!’”

The sisters from Gold Springs Ranch in Tsékǫ Haagééd, are the eldest daughters of Shawn and Glenda Wero. They have a younger sister and a brother: Sarah and Peyton Wero.

“I decided to run thinking I’m going to go against a bunch of other girls,” explained Joyceline, who ran for the title in October 2017.

She thought this would be her opportunity to finish what she started four years ago and to fulfill her pageant platform: to influence many more people in rural areas of Western Navajo and now, fighting against COVID-19 and future pandemics and the pandemic’s mental toll.

About a week after the world first learned of a mysterious cluster of pneumonia cases in Wuhan, China, authorities announced that scientists had found the source: a novel coronavirus. The virus became known as SARS-CoV-2.

“This is the first pandemic ever that I’ve witnessed in my lifetime,” Joyceline said. “A lot of people are going through a lot of things mentally, physically. There’s abuse in all aspects of life.

“So, I want to spread awareness (and) make people happy and joyous throughout this time,” she said, “because everybody kind of looks at the negative aspects.”

Her practical approach toward battling COVID-19 mirrors that of many women around the world who are directly involved in pandemic response.

Joyceline said she has creative ways and ideas on how to fight the spread of the virus and how to support someone who’s dealing with the psychological fallout from the pandemic.

For instance, taking a holistic approach to hygiene using tsá’ászi’ and investing in people and going outside as much as possible.

“I started looking at things from a traditional aspect,” Joyceline said, “like holistic sanitation and bringing a positive, mental awareness mind through our traditional teachings.

“I’m really excited,” she added. “That’s why I ran for Miss Western Navajo, so I can reach a wide audience while teaching … to get back to our Diné roots. Some of us have strayed so far from it that we have become lost.”

Considering the level of risk to host an event, Joyceline will be hosting virtual events – such as storytelling and giving away prizes – on the Miss Western Navajo Facebook page.

“Every week my goal is to share one of those teachings,” Joyceline said. “Like tying up your hair with a (tsiitł’óół) for a day or burning cedar and using corn pollen, learning about our creation stories.

“Just to remind people we come from a strong lineage of our ancestors and that we can get through this COVID-19 pandemic,” she said.

This month, Joyceline will give away a ribbon skirt and a traditional outfit. In December, she’ll gather volunteers for a firewood project for elders across Western Navajo.

“It’ll also be fun for people to stay engaged now that we’re all on-screen,” she said.

Joyceline said competing for the Miss Western Navajo crown wasn’t much of a competition between the sisters because it was more of tag team contest to motivate one another.

The sisters had to practice their routines separately. And they didn’t tell their family what they were doing.

They went through eight different categories, such as modern and traditional talent and skill competitions, on the day of the pageant.

“(Thomasina) danced in the back just so I wouldn’t be nervous,” Joyceline said. “I’d go up (on the stage) and I’d do my (routine) and I’d come back down, and she would say, ‘Good job, good job.’ We were congratulating each other every time.”

Because the pageant was a virtual event on Zoom, news of the sisters competing in the pageant reached their father.

The pageant’s Zoom link was shared across the Tuba City community, and someone told Shawn that his daughters were the only contestants.

“Your daughters, Joyceline and Thomasina are running,” someone explained to him.

Shawn jumped into his vehicle and went to Legacy Inn where he was surprised to see both of his daughters in the room.

“We were so nervous,” Joyceline told their father. “How would we tell you about this. We wanted it to be a surprise.

“We aren’t the type of girls who run in pageants,” she added. “This is a whole new step for us.”

Thomasina said, “Don’t tell dad. What if we lose and we don’t come back with anything?”

Joyceline not only took home the crown, but also took home a Pendleton blanket and a bag, suitcase, traditional skirt, a Babushka Navajo floral scarf and scrunchies, among a list of things. Thomasina also took home items.

“I was really happy about it,” Joyceline said.

Joyceline is a biology student at Diné College. She’s studying for a career in health with plans to become a physician. She’s set to graduate with an associate in the spring, and with a bachelor’s thereafter.

“My inspiration was my (late) great-grandmother, Nettie Nez; (late) grandfather, Daniel Kee; (late) nálí Ethel Nez,” she said. “I have six people who I really look up to, who keep me on my feet. Also, my nálí Sarah Nez, my dad, and Cecelia Joe (of Tsékǫ Haagééd) who taught me how to sing.”