Piñon volleyball coach Nellie McCurtain has no depth but the Lady Eagles are showing some promise in the Arizona 2A North Region.

“I don’t have a bench but I do have a good group of girls,” McCurtain said. “I have six players that are solid and the ones that are on my bench are JV players.” 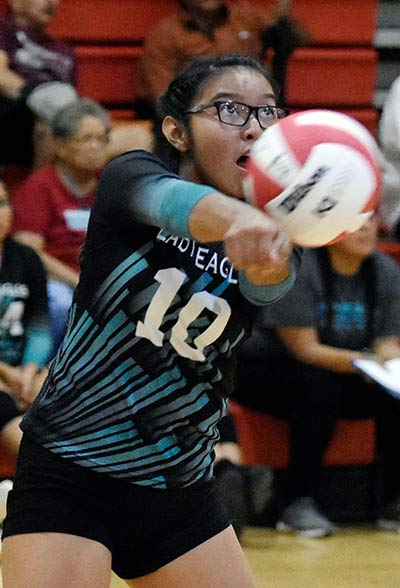 Piñon has compiled a 5-3 record, which includes a 3-1 mark in region play going into last night’s showdown with top-seed Round Valley. Scores for that game were not available at press time.

In region play, the Eagles swept Many Farms and Valley and, to stay in contention, Piñon split with longtime nemesis St. Johns.

“That was a biggie for us because we haven’t beaten them since we had Raquel (Archie),” McCurtain said of their 2015 season when they won the state title with a 24-1 record.

“Now we have to beat Round Valley,” she said.

Going into Tuesday night’s 2A North slate, Round Valley owned a 3-0 record followed by 3-1 marks by Piñon, St. Johns and Valley. Of the three latter schools, the Eagles do have a slight edge in the tiebreaker rule by going 2-1 in head-to-head competition with Valley and St. Johns.

McCurtain likes that her team is competing but she said the league race is still up for grabs. And with the playoffs being a possibility, she’s hoping to finish atop the region standings for one of the higher seeds in the 2A state tournament.

“If we can bypass Round Valley in our region we should be seeded higher,” McCurtain said.

The longtime Piñon coach said that’s easier said than done as her squad is still ironing out flaws and deficiencies.

“We’re still learning how to play smart,” McCurtain said. “We’re still trying to figure out teams because when we play them we need to know who their best passers and servers are. We need to know all those things.”

Of the six players in her rotation, she returns two starters in senior Emerald Ben and junior Shondiin Jim. The two lettermen, McCurtain said, have brought stability to the team.

The other players are new to the varsity, including a pair of freshmen middle blockers: Meleila Chieg and Delyla Denny.

“They’re giving us a run but at times they are making freshmen mistakes,” McCurtain said. “They are still learning to be more consistent with their hitting and passing. Right now they play a lot of jungle ball and I’ve told them they need to start jacking it up.”

Piñon also has seniors Destiny Magdaleno and Kenisha Whitehorse in the mix with Magdaleno playing on the JV squad last season while Whitehorse took a two-year hiatus from the sport before joining this year.

McCurtain said both players are improving and of the two the Piñon coach acknowledges that Whitehorse still gets the jitters when the game gets tight.

Going forward, McCurtain is hoping that her team will find that team chemistry. She wants them to rely on one another so that they can build each other up and stay poise in tough situations.

“They have to be solid with one another to get to the state playoffs,” she said.

In bracket play, the Eagles made the championship bracket playing Tuba City, Window Rock and Kanab, Utah, as they finished 1-2 in the tournament.

McCurtain said playing teams of that caliber will help in the long run as it will improve their volleyball IQs.

“It was a good learning experience for them,” she said.