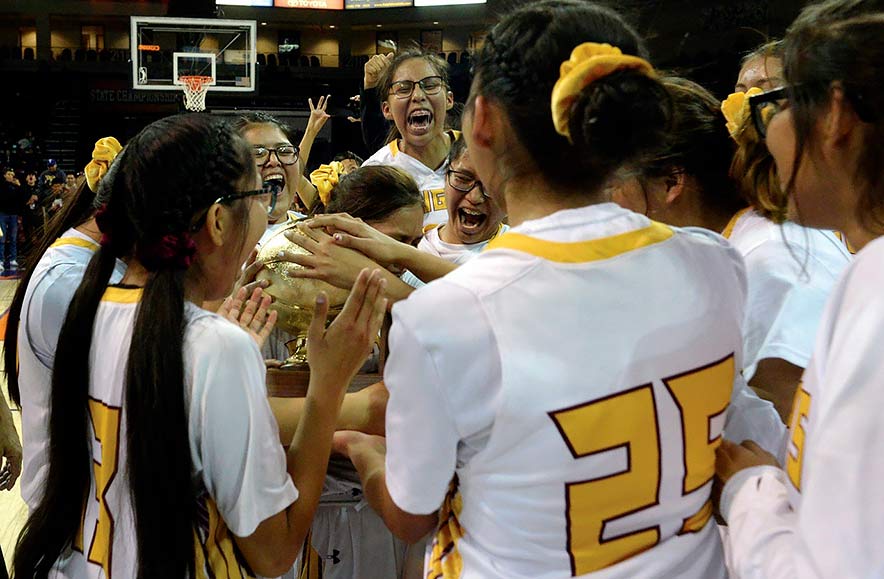 Experience comes in many forms.

Of the two teams in the Arizona 1A girls’ state title game, Rock Point had less experience than the Baboquivari Lady Warriors.

The Sells, Arizona-based school earned its third consecutive trip to the state title game while Rock Point was making a return visit since the 2017 season.

That certainly didn’t stop the second-seeded Lady Cougars, as they stayed composed to pull out a 69-61 win.

With that Rock Point won its first state title, running its overall record to 25-4 overall.

“I’m excited because this is our first state championship,” her younger sister Tamira John added. “It’s our first golden ball for Rock Point Community School so we made history.”

Based on their schedule and the teams they played this season, Lady Cougar coach Andrew Reed prophesied that this was their year to win the golden ball after his team came up short three years ago.

“I owe this to the community of Rock Point,” he said. “I’m glad they stayed patient with me. We finally got one.”

Admittedly, Reed said he’s been chasing that elusive gold ball for quite some time.

“I’ve been after this state trophy for the last three years,” he said. “I told my girls that there is no quitting in us now. We were going to dig deep as far as we can and go after that state title.”

And although she’s new to the team, freshman Arianne Begay said she was thrilled to help Reed and the upperclassmen finish out the season as the last team standing.

“I know they came up short before,” she said. “I’m really proud of them because they worked really hard for this.”

The game remained close throughout, with neither team taking a lead larger than seven points until Rock Point finished out the contest on a 10-3 run as Baboquivari got as close as 59-58 with 3:27 left on a made trey from freshman guard Jordan Ramon.

“I told my girls ‘Don’t panic,’” Reed said. “I told them that we needed to keep fighting. We needed to stay strong both mentally and physically.”

Reed credited the team’s conditioning for making that final push.

“When it came down to the fourth quarter we didn’t get tired,” he said, while noting that earlier in the season the team had an epiphany.

The Rock Point coach said they realized they were “out of shape” when they played in the Aztec tournament back in January.

“We came home and we went to the football field and we just started running,” he said. “We ran up the bleacher, we did some weightlifting to get ourselves really conditioned.”

As Rock Point started to pull away in those final minutes, the Warriors tried to shoot their way out from the three-point line. But on two of those possessions, the Cougars came away with a couple of blocks.

“We didn’t want them to get too comfortable behind there,” Reed said as his team closed out Baboquivari’s deadly shooters.

As a team the Warriors finished the contest by making nine treys with Ramon and senior Autumn Nelson hitting three each.

“I have to give them a lot of credit,” Begay said of the Warriors as her team had a tough time chasing their shooters.

“They can really hit their threes,” she said.

Baboquivari had seven players score headed by the 21 points turned in by Nelson.

“She really impressed me,” Tierra John said as she tried to shadow Baboquivari’s best player. “She can really drive so it was hard to slow her down.”

With 10 points each, Ramon and senior forward Alonalani Felix helped Baboquivari keep pace with Rock Point for most of the contest.

“They’re an excellent team,” Tierra John said of the Warriors. “They made us earn it so we had to keep fighting.”

As the team’s point guard, Tierra steadied the Cougars as she finished with a game-best 23 points. Her younger sister wasn’t far behind as the Rock Point post finished with 16 while Begay added 14.

With all but three seniors graduating, Reed is looking forward to next year.

“We’ll be back next season,” he said. “The girls know what it takes to win.”

“Hopefully we can get another one for our school and our community,” she said.